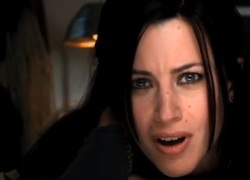 YouTube is as good a place as any to test a comedy concept, particularly a potentially controversial single-person vlog rant. Shelby’s Rant is the latest from filmmaker-comedian Matt Koval. To kick it off, a sassy vlogger Shelby (Makinna Ridgway) vents her pent-up frustrations with 1980’s “classic” nostalgia movies. Specifically, she’s hones in on The Goonies for being terribly overrated though admitting she has never seen it. (Say wha?) The whole rant in fact is based on a snarky MadAtoms blog post written by Becky Bain.

The pilot (above) for the series was produced by MadAtoms and USR Content for Fox Digital Studios. Originally aligned with now defunct Fox Atomic, MadAtoms.com is a comedy and culture site that has been the launch pad for a number of web series projects including S.W.I.P.E. and the upcoming Josh Gad comedy, Rent Control.

Koval tells us that they have five episodes already shot and ready to go. Whether or not the series gets greenlit for more depends on how much attention (comments, ratings, etc.) the video gets on his YouTube channel. Right now it’s tracking at just under 14,000 views on YouTube since it was posted late Tuesday. Maybe its the controversial topic (bashing the Goonies!?), but commenters haven’t been shy, with just under 1000 so far. (So if it’s you’re thing, then you have your call to action.)

Koval is an active YouTube creator-comedian and his channel has racked up a non-shabby 55,000 subscribers. His videos have broken the million-view mark on the site twice, most notably his “Fuplers” and “YouTube in 1985” sketches: