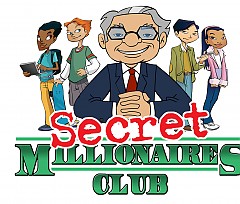 With their combined experience in children’s television programming and marketing, Andy Heyward and Amy Moynihan probably know more about your kids than you do.

That’s why they’ve formed their own company called “A Squared Entertainment” (cute, guys) and have teamed up with AOL to produce and distribute a season of three to five minute ‘educational webisodes.’ These aren’t just any web series, however – they’ve got star power like Warren Buffett, Martha Stewart and even model Gisele Bundchen in three new series—Secret Millionaire’s Club, GiGi & The Green Team, and Little Martha.

They’ve even managed to get the late astronomer Carl Sagan in the mix with Kosmos, a show that was inspired by Sagan’s Cosmos: A Personal Voyage and is actually created by Ann Druyan, Sagan’s co-author on Cosmos. Secret Millionaire’s Club and GiGi & The Green Team are due out on AOL in the fall, while Little Martha and Kosmos aren’t coming until Spring 2010.

AOL will be working with MGX Lab to develop online activities and games for each series, so your kids can look forward to spending some quality time with Warren, Martha, and Gisele even after the show is over. Considering Heyward’s credit list is practically a list of classic kids shows (Inspector Gadget, Captain Planet, Sailor Moon, and even the 1991 classic Hammerman with M.C. Hammer), you can bet that your kids will be hooked. Come to think of it, if they put anything remotely related to Captain Planet or Hammerman, you’ll probably be watching too.