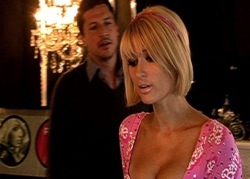 Every day the lines between web television and traditional television get a little grayer. Web series snatched up for TV, either wholesale pickups (think Spike TV grabbing Angel of Death) or as development for longer-form series (Comedy Central ordering Midwest Teen Sex Show). And now, as the “Hulu effect” is getting online viewers more comfortable with longer-form episodes, we’re seeing indie TV pilots come to the web for a kickstart.

If the web is TV’s new development ground, allowing for cheaper proof of concepts than the shrinking multi-million-dollar-per-pilot system, then it only figures that we’re going to see more longer form original series starting out on online.

Somehow most of the web missed this 23-minute click-worthy gem called Rex which quietly was posted online recently. Think Paris Hilton, Jamie Pressly, Lance Bass and former MTV VJ Simon Rex, who was later revealed to be an adult film star, in a comedy about drumming up tabloid scandal. Who better than this lot?

Created by TV development vet Guy Shalem, the team behind the half-hour indie pilot has been running a campaign on Facebook to build up its fan base while pitching it to networks. I talked to Shalem, who said he was frustrated after selling pilots to ABC and NBC that never saw the light of day. 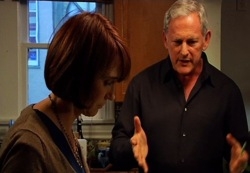 “In the wake of networks’ failure in the past few years to deliver funny content that people want to watch, people are taking matters into their own hands,” said Shalem. “People can do it themselves and use the internet to validate it, and the fans are finding it.”

He went on to say that the TV business is very much in a period of transition. “Every transitional period is difficult until somebody comes up with a solution,” he noted. “Look at our history, the studio system which was essentially bankrupt by the late 70’s since they were blowing money on epics like Cleopatra. They didn’t realize that around the corner was the blockbuster that could be done for much less like Jaws.”

Shalem, who wrote the series along with Rob Kolson, casted a host of headline drawing names like Hilton, Rex, Brian Huskey and Alias star Victor Garber.  Shooting on spec, the mid-five-figure budget covered costs for locations, food and below the line crew. Shalem admits that he called in “a lot of favors.”

The show’s star, Simon Rex who is also a producer, plays the title character Rex, an actor looking to stir up some limelight stealing controversy. “Rex seems to tap into everyone dirty little secret, their addiction to gossip,” he noted. “We can’t seem to get enough of it which is what makes this show so relevant. We’re excited to get positive comments from all over the world on our Facebook fan page,” added Rex. “And we I am very hopeful that this will get picked up by a brave network that gets its potential.”

So far reaction to the series has been remarkably positive, according to Shalem, who says he personally responds to the hundreds of comments on the show’s Facebook page which now boasts over 5000 fans.  “I love the fans even more than the executives,” he quipped.  “The old fashioned executives are holding on to a system that is broken,” added Shalem.

Asked whether he would consider developing it as a web series, he said he would certainly do it if the deal was right. Most of his meetings so far have been with network executives, though there may be interest from online studios. The plot feels close to David Faustino’s Star-ving on Sony’s Crackle, which by the way just inked a DVD deal for the series.