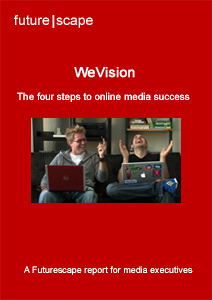 So what are the secrets to a successful web series? A new research report out from London-based Futurescape sets out to answer just that. As everyone from advertising execs, studios, digital agencies and of course content creators try to figure out what why some web series have become break out hits, while others languish in obscurity.

The researchers framed their findings with a four “step” model based on their analysis of top web series.

Several in-depth case studies center the research, including US web series Diggnation and The Guild along with international hits Sofia’s Diary and The Gap Year. The case studies broke down each series’ advertising effectiveness, innovative use of social media and other online community engagement and underlying business models.

Some highlights from the findings:

Revision3‘s Streamy-nominated Diggnation, which has produced over 200 weekly episodes, boasts a whopping 48% of viewers reporting they have purchased a product from their sponsors as a result of the show. Sofia’s Diary, a multiplatform teen drama that has sold format rights in numerous countries including Chile and China has had over 20 Million views so far just for the Chinese version.

While each of the series examined reach notably different audiences, an underlying pattern rings throughout—web shows that push the envelope in terms of interactivity and community tend to inspire and grow audiences (and loyal evangelists) better than those that don’t.

The 40-page report is written by Futurescape’s Colin Donald and Özlem Tunçil, both of whom have extensive backgrounds in the digital space, with Donald having launched the New Media department at Virgin Media. The pair have penned two other research reports on web television, “The Birth Of Online TV” and “UK Web Shows Now.”

Tubefilter has a special discount code (20% off) set up for our readers. To order the report, head to the Futurescape site and enter in the code “tubefilter1” for the WeVision report. For discounts on their other two reports, enter “tubefilter2”