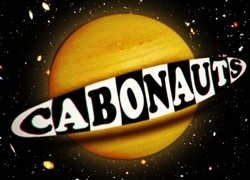 Set in an intergalactic space taxi cab, episodes will feature various characters busting out into original song while on their cosmic trips. Numerous celebrities are expected to be in the series including some from sci-fi staples— Star Trek (its various incarnations), Buffy, Alien Nation, Buck Rogers and Dr. Who.

The 15-episode first season is said to be quite a sizable production, exceeding that of last summer’s indie runaway musical hit Dr. Horrible’s Sing-Along Blog. Helping to offset that of course will be an exclusive deal with Dailymotion, which will release the series exclusively on site for the first month of each new episode. 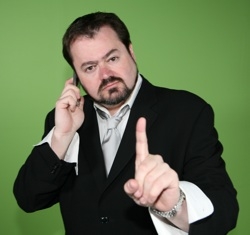 I asked Hayden what inspired this musical sci-fi romp and apparently this has been a longtime dream of the English-born comedian.

I’ve always wanted to do a sci-fi comedy; my first inspiration to become a writer came from reading Hitchhiker’s Guide as a teen. The musical element came much later; I’d cast Norm Thoeming as Harry, the driver, and he performs each week at I.O. in “Opening Night: The Musical”. Knowing he had a musical background, I began to wonder if there was a way to incorporate that into the show – and slowly my mind came around to the idea of making it a musical. I’m writing all the music and lyrics and Norm and Monica Young (who’s also a principal cast member) are just INCREDIBLE singers. They’ll take on the brunt of the singing and I’ll make sure just to write single words or lines for me to sing. I’m not exactly tone-deaf but Norm and Monica could each do American Idol.

Though not as largely used by US audiences as say YouTube, globally Dailymotion is a formidable force in online video, attracting more that 55 Million unique visitors worldwide in March according to comScore. Other notable deals by Dailymotion for original web series included kid-friendly Ghost Town, which landed an exclusive run on Dailymotion Kids back in February.

If 2008 was all about action heroes, 2009 is becoming the year space got cool again. From the Battelstar finale to Star Trek’s re-birth, there’s a whole lot of fans (and studios) looking up, way up, with their entertainment dollars.

There’s no fancy site up yet for the series, though there’s a production blog in the works at cabonauts.com. For more timely updates, you can follow the show’s Twitter – @thecabonauts.

What do you think, could The Cabonauts be this year’s Dr. Horrible?