Tubefilter reporter Andrea Ball had some fun on the red carpet (above) while writer John Manalang spent the day at the Streamys and had a chance to soak it all in and chat with the stars of the evening. Photo credit: The Bui Brothers 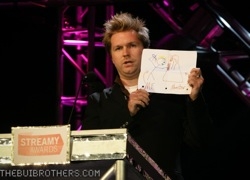 Before I stepped foot on the grounds of the Wadsworth Theatre in Los Angeles, I didn’t know what to expect in the first annual Streamy Awards.

I remember watching the Academy Awards and Emmys on TV. Celebrities and critics would always brag and talk about how the film industry has gone far since its early days and how it evolved into the phenomenon it is today. But as soon as the lights dimmed down after the Streamy Awards ceremony, I knew that a new era in filmmaking has finally gotten the recognition it deserved—that new era is the spectacle and wonder of web television entertainment.

Prior to the big game, dozens of web stars and film celebs flocked the red carpet and it was indeed a sight to behold. Never did the words “exciting”, “creative” and “innovation” become unsaid in each passing moment during the event. 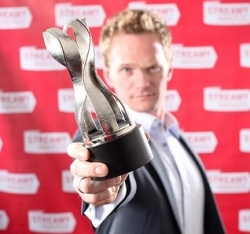 “[Web Entertainment] will become 10 times larger than today,” said Jeff Hayzlett, CMO of Kodak, one of the sponsors of the event. “Kodak’s always been an innovator of entertainment, and we’re right on the back of web entertainment, supporting its cause in bringing people something new,” he said.

Parading through the red carpet and greeting the media were the stars and talents that created so much great content on the web for us to enjoy. All the familiar faces of film and web entertainment were there, celebrating the moment—from Felicia Day and Obama Girl…sorry, Amber Lee Ettinger to Neil Patrick Harris, Lisa Kudrow, Taryn Southern and Rosario Dawson, everybody was having a complete blast. 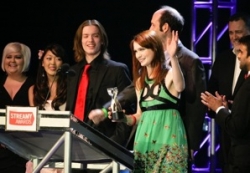 “[The Streamy Awards] legitimizes all the great creativity on the web,” said Jace Hall who is the star, writer and producer of Crackle’s The Jace Hall Show. Hall, who was also one of the award presenters in the Streamys, said that the collaboration of film and web entertainment producers and stars is symbiotic, integrating the best of both worlds and producing so much innovative content that’s available for people to watch “everywhere” and “when they want it”.

“I see tonight as a revolution,” said Felicia Day, who won the award for Best Female Actor in a Comedic Web Series for her performance in The Guild. “I feel like I’m in graduation,” she said. “It’s definitely a celebration and I’m very excited to be here.”

From her acceptance speech for Best Female Actor in a Comedy Web Series (quoted thanks to NewTeeVee):

“As an actor, I want to thank all the casting directors and directors and producers who rejected me horribly. And never hired me. And didn’t like the way I looked… Because without them beating me down into the ground and making me depressed, I never would have picked up a pen and written my own thing and did it and gone around [all of them].” – Felicia Day 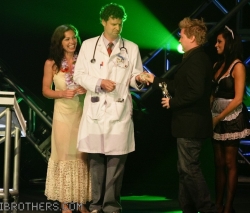 As the announcer, Mr. “Chocolate Rain” man Tay Zonday, sets off the “creative explosion” that is the Streamy Awards, the hard work, blood, sweat and tears of the talented web celebs brewing in the audience were finally given the prestige recognition. During one of Joss Whedon’s acceptance speeches for his excellent work with Dr. Horrible’s Sing-Along Blog (which took home seven Streamys, including the coveted Audience Choice Award), he said that web television will be viewed as “not the new media, but THE media.”

From the shows I’ve been watching on the web for over a year to the amount of talent available, I couldn’t agree more with Mr. Whedon. And with each thunderous applause and praise given after an award is presented, I’m sure everyone else in the audience agrees with him as well. 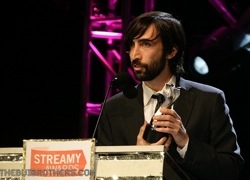 Besides, just as Mr. Hayzlett said as he presented the award for the Best Ensemble Cast to The Guild, “What’s a good LOL without a BFF?”

I was going to describe the “best” moment in the awards and elaborate on how it made the night even more ecstatic and hilarious, but from what I’ve experience, clearly, there were none. Because the whole night, LOLs were in the air (and ROFLMAOs especially), BFFs were made, and every moment in the ceremony was nothing short of spectacular.