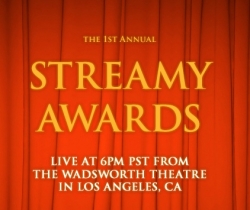 Ladies and gentlemen, the time has finally come to give a proper salute to the best of web television of the past year. The first annual Streamy Awards launches tonight at 7:30PM PST at the Wadsworth Theater in Los Angeles, CA and you better prepare yourself for one hell-of-a show.

Featuring dozens of your favorite web series, actors and actresses nominated in 24 award categories reviewed by The International Academy of Web Television, The Streamy Awards honors all the hard work, sweat and tears by web entertainment producers in giving us the best damn entertainment we can find on our browsers. The show will be streaming LIVE via www.streamys.org.

Among the nominees in tonight’s show include Emmy-nominee (and now Streamy-nominee) Neil Patrick Harris, who is up for Best Male Actor in a Comedy Web Series award for his role in Dr. Horrible’s Sing-Along Blog, SciFi.com’s epic web series Battlestar Galactica: The Face of the Enemy for the Best Dramatic Web Series award, Lisa Kudrow’s performance in Web Therapy is on the run for the Best Female Actor in a Comedy Web Series award and much more. But of course, you loyal readers will also be handing out a very special Streamy tonight, as you have chosen your nominees for Audience Choice Award.

Presenters at The Streamy Awardsare a who’s who of today’s pioneers in the field web entertainment, including Felicia Day, Joss Whedon, Jessica Rose and many more. This past Web Television week couldn’t have gone any better and what would be a better way in concluding this eventful week than The Streamys.

Thanks to all the sponsors, co-hosts and creators and volunteers in finally making this event come to life. So folks, grab a seat, some duds and crack open a beverage because the Streamy Awards will be going live in a tick! The Red Carpet show begins at 6:00 PM.