'Marvel Super Heroes: What the–?!' Teases Before April Debut

As Marvel’s upcoming film gets ready to unsheathe its claws with X-Men Origins: Wolverine coming up this May, geeks and fan boys await their next fix of epic superhero adventure. However, as for us loyal followers of the web, Marvel has conjured another saga we can look forward to. But, instead of an incredible battle between good and evil, we’ll witness super villain M.O.D.O.K. unload on some goof for ruining his scene. Yes, just like The Dark Knight and Terminator superstar Christian Bale. 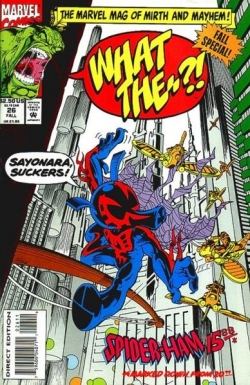 That’s right folks, the legendary comic book franchise is taking a jab at satire comedy with all our familiar super heroes/villains this April with the web series, Marvel Super Heroes: What the–?!. This new web series gives a head-bopping nod to Marvel’s superhero parody comic-series, Not Brand Echh, which appeared in the 60s as well as WHAT THE–?! in 1988.

After watching the teaser, it looks like Marvel’s stepping up to the right plate when it comes to launching a web series—just the teaser itself could already be considered as a potential viral hit. Seeing Marvel characters in a different light is a treat itself—who would’ve thought someone could actually tell The Hulk to shut the hell up? But we’re not sure if Bruce Banner was scared of M.O.D.O.K’s anger or his Fran Drescher-like screech. Hopefully, the wonder minds at Marvel could conjure up better parodies and satirical hooks to keep the “comic” mischief happening.

There have been plenty of parody series attempts hitting the web for quite some time, and seeing Marvel taking a crack at the genre is something to look forward to. Maybe we’ll see Wolverine picking up a hooker in Arizona, some “leaked” nude photos of X-Men’s Jubilee hitting the web or even a Spider-Man sex scandal or two. Or how about Professor X as Larry Flynt?