Whedon, Kring and Lindelof Step Into 'The Write Environment' 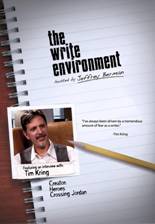 While we’re not tuned-in to our favorite series on the web, chances are that our eyes may be glued to the tube that started it all—the television. For example, some of us may be following Vincent Chase’s crew in HBO’s Entourage, anticipating the next episode in NBC’s Heroes saga or getting Lost in some island on ABC. Sure, we may be amazed in the style, content and appeal of each series, but Vincent’s swagger, Sylar’s tyranny and the island’s time-bending mysteriousness can only be brought to life by one feature, and that is the writing.

Creator and host Jeffrey Berman steps into The Write Environment, as he puts us face-to-face with some of the most talented writers in the industry such as Dr. Horrible’s Sing Along Blog (and Buffy The Vampire Slayer) mastermind Joss Whedon, Entourage creator Doug Ellin, Lost co-creator Damon Lindelof and Heroes executive producer Tim Kring.

“How often do you really get to hear interviews with the people who create the entertainment we spend the majority of our lives watching,” said Berman. “I figured [the show] was a great opportunity for the fans to hear from the folks behind the scenes, while offering some insight into the work process to all those screenwriting neophytes out there.” 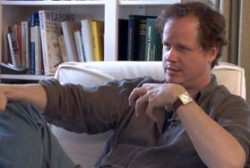 As a writer himself, Berman experienced the struggles of the profession and the chances he had to take in order to move forward. “The first script I ever wrote was an episode of Kolchak: The Night Stalker when I was 14 years old,” said Berman. “It wasn’t until I hit my early twenties that I returned to screenwriting,” he said, as he lived in Florida before as a PA, collaborating with a colleague on their next project.

“It floored me when I realized he was taking this serious,” said Berman. “Two months later, I sold everything I had, loaded up my convertible and headed to Los Angeles.”

Berman and his partner sold their first script to Imagine Films. But, along with other screenwriters in the industry, last year’s writers’ strike halted Berman’s path to success. However, just like a sudden plot twist, he found a way around the obstacle that could shed some light to writers and fans everywhere—The Write Environment. 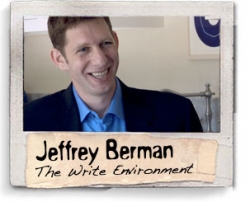 “The series came about as a byproduct of the last Writers Guild strike,” said Berman. “I had co-founded a web site called UnitedHollywood.com. Our mission was to keep our members and the public, informed as to what was really going on behind the scenes. My contribution to the site was producing live interviews from the strike line as well as viral videos to help get our point of view heard.”

The series greatly succeeds in giving viewers an incite into the minds of some of today’s prolific TV writers. From Ellin’s revelation of his fear of failure, to The Simpsons’ executive producer Sam Simon’s early days in Hollywood, The Write Environment gives us the most informative behind-the-scenes look you won’t see featured on any DVD. And not only not only does the series provide info from the top players of the industry today, but of course, it gives out a huge tip to upcoming screenwriters. 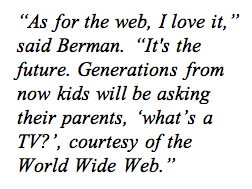 “If there’s one sentiment that was universal from one interview to the next it was this, ‘if you want to be a writer, write'”, said Berman. “Style, technique, even theory. Anyone can learn the tricks of the trade, so to speak, but we can’t all be concert pianists or Nobel physicists no matter how hard we study. On some level, it’s innate and you either have it or you don’t.”

Aside from dissecting the minds of television writers, Berman has been also hitting up the web with Strike.TV. “For the next several months I’m doing a series of live interviews from the Writers Store in Los Angeles,” said Berman. “I interviewed Robert Hewitt Wolfe, writer/executive producer of shows like Star Trek: Deep Space Nine, Gene Roddenberry’s Andromeda, The 4400, The Dresden Files and The Dead Zone,” he said, which is now available. Berman also struck a deal with Strike.TV to do a one-hour interview on the site, as he prepares to talk with Tim Minear, writer/Executive producer of Dollhouse, Angel, Firefly, The X-Files and more.

“As for the web, I love it,” said Berman. “It’s the future. Generations from now kids will be asking their parents, ‘what’s a TV?’, courtesy of the World Wide Web.”

The Write Environment is also now available on DVD.