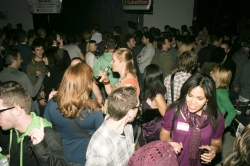 What a night! Nearly 1,000 web creators, producers, actors and other web television industry folks packed maniaTV Studios (yes, home of the old Gilligan’s Island soundstage) to network, imbibe, and assert that web television is a force to be reckoned with. We put on a showcase of web series from the Hollywood Web Television Meetup’s community, screening All’s Faire from Dinosaur Diorama, Leaving Bliss from Shanna Micko, GOLD from David Nett, Lost Parodies from The Fine Brothers, The Meatgrinder Show from Chris Erb and Dal Wolf, Valley Peaks from Chicken Cobra, Is It Safe? from Pith-e Productions, and Puppy Love from L Studios. Thanks to all who submitted their web series for consideration. You can view the Web Series Showcase below on Episodic, who demonstrated their service at the meetup and were giving away beta accounts for their awesome publishing platform that’s specifically designed for web series.

After the screening, Pigeon John and his band Rootbeer (featuring Flynn Adam) performed live for maniaTV’s Stage 5, while the the crowd took advantage of the open bar and shoulder-to-shoulder networking.

The next Tubefilter Hollywood Web Television Meetup will be in April after the first annual Streamy Awards, honoring the best in web television, on March 28, 2009. A limited amount of discounted advance tickets to the Streamy Awards After Party are now available for purchase. Every advance ticket purchased will be entered into a drawing for admission to the invitation-only Streamy Awards Ceremony and Gala.

Were you there? Sound off below and make sure to tag your photos with upcoming:event=1496691.