Did ABC's 'LOST Untangled' Rip Off The Fine Bros?

This sounds familiar. Oh wait, haven’t The Fine Brothers been spoofing LOST with action figures for over a year now? Their hit web series parody LOST: What Happens Next? has racked up over 4.5 million views on YouTube and other sites since its debut last January. Both use the same action figures licensed to a Chinese manufacturer, shaky hand-held figurine movements and silly exaggerated riffs on the actual characters’ voices. Interesting.

From a legal standpoint, it’s not clear if there’s any direct recourse here for either party. In terms of who owns the intellectual property of the show and its characters, ABC in fact has every right to derive content from that IP. And on the flip side, The Fine Brothers’ parody series was a derivative work itself that most likely falls under fair use provisions of US Copyright Law, particularly after the 1994 Campbell v. Acuff-Rose Music case which confirmed the idea that a commercial (for profit) parody can be indeed be fair use.

The Fine Brothers, Benny and Rafi, wrote a compelling blog post today about the situation, after hearing about it from a concerned fan. An excerpt from their post:

Here we are, on the web for over 4 years, having created one of the most popular web series with millions of views, and LOST of all places actually comes through with this brilliant form of additional content for their established show, and rather than come to the source, to us, the web creator hungry for the opportunity to break into television- no. They do it in house, and on their own.

Moments like these showcase how the web has not come close to being what many of us were hoping it would be; the new place for our generation to be discovered (in our teenage years we stopped entering the celebrity filled film festival circuit and decided to put all efforts into the web instead–which is now becoming celebrity driven itself). That is why we are here, why most of us are here, but now all we can do is ask what more can one do to be discovered and not be slighted for creating content on the web? 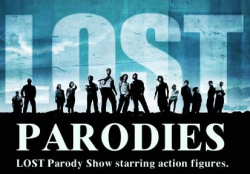 There are bigger questions here of course than whether or not ABC ripped off the LOST parody concept. It’s a wake up call that it may be time to examine, and perhaps update our current understanding of intellectual property protections in the age of the social internet.

Is the web becoming easy picking grounds for lazy staff writers looking to tap the latest meme? Are the fundamentals of social media—free sharing of ideas, media and information—contradictory to Hollywood’s idea stealing paranoia?

Hollywood has been lifting, borrowing and “adapting” ideas, for years. Japanese films, Lovecraft, you name it. That’s part of how entertainment industry works. The greater issue is whether web series creators are putting their work at risk of pillage simply by sharing it. If that’s the case, then it may be time to dust off the law books and sort this all out.

What do you think, should there be greater protections for original content on the web? Are web series creators at risk by freely sharing their works?