The Radio Star Lives On In 'Polyester Dreams' 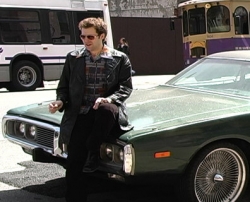 The Buggles proclaimed that video has killed the radio star, but rock DJ Warren Orlando has already cheated death, thanks to Andrew Harrison, star and creator of the new web series Polyester Dreams. The indie comedy series tracks the trials and tribulations of Warren Orlando, a prog rock DJ at radio station WXLA, who follows the rock and roll creed of self-loathing and manic depression in his own way. His misfortunes in life, from his Academy Award winning ex-girlfriend humiliating him in the media to reading half-assed commercial bits, are interwoven with homemade music videos, playing “forgotten” songs mainly from the 60s and 70s.

“Warren Orlando is a dying breed,” said Harrison. ”In an age when satellite radio is on the verge of bankruptcy, radio as it once was is almost extinct. Very rare are the stations in which DJs make their own playlists and spin their own records.” 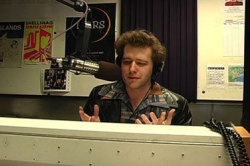 If Californication’s Hank Moody were ever a disc jockey in his life, Orlando would fit that profile smoothly like a vinyl spinning on an old record player. “Warren is extremely bitter that his radio career never really got anywhere,” said Harrison. “He is the type that wanted to make a name for himself, and when he realizes he didn’t, he’s content to destroy everything. And just be a total dick in the process. And I guess this is funny to me. To watch a guy just suffer through the indignities of life and rail against it the best he can.”

Music from the show, such as  The Idle Race‘s song in the first episode, also get airtime in Harrison’s real-life NYU radio show, “Plastic Tales From The Marshmallow Dimension.” The first season of Polyester Dreams boasts artists from the late 60s and early 70s such as Complex, Lucifer’s Friend, Coven and Saturnalia. Although most people may not recognize these names, Harrison considered them to be “ahead of [their] time.” The versatile Harrison also hosts the web series, Street Talk with Andrew Harrison, found on TheStreet.com.

Other cast members in Polyester Dreams include Satu Rautaharju (appeared on HBO’s Flight of the Concords), improv comedian Rob Lathan (The Colbert Report, Human Giant ) and Dallas Coyle from the metal band God Forbid. Two episodes are currently out, with six more coming in the first season. All episodes are available on iTunes and the show’s official site.