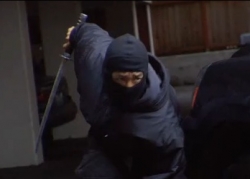 Watch out, world of web TV, because there’s a new ninja in town: Katana has debuted with a pilot episode on Strike.TV. Billed as the first martial arts web series, Katana brings in a host of top-notch stunt talent. The  hard hitting show stars John Koyama and Yuji Okumoto (also the writer-producer) alongside stunt superstars Al Goto, Sam Looc, and Don Tai. If you haven’t recognized any of those names, check out those IMDB listings, because you’ve definitely seen their movies.

Koyama and Okumoto play brothers in a Japanese American Yakuza crime syndicate family. Where Koyama quit the ninja lifestyle to spend time with his wife and daughter, however, Okumoto decided to carry on with the family business – and “convinces” Koyama to join him. Family kidnappings, organized crime, and ninjas; it’s like 1980s action movies meet The Sopranos.

Personally, as a huge fan of both martial arts films and ’80s action movies, I’m glad to see things start moving to the web – especially since Katana‘s pilot episode has only stoked my lust for all things ninja and Yakuza. Oh, and Koyama reminds me of an Asian Solid Snake. Bonus points.

Strike.TV came together in December 2007, as a result of the infamous writer’s strike. We have a healthy dose of coverage of its early days and first web series, along with plenty of reviews. More recerntly, we interviewed Kate Purdy of Strike.TV’s Joe & Kate to hear more about working on an indie web series with the upstart web series portal.