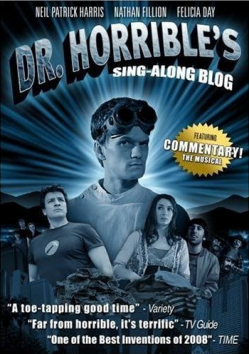 You know, we’re going to look back one day and remember Dr. Horrible’s Sing-Along Blog as the one that kicked original web series into the entertainment big leagues. This year Joss Whedon‘s brilliantly aberrant creation—a musical superhero love story in three acts—won the hearts of millions, vaulting the indie web series to the top of the charts both as a “TV” show and a full-length soundtrack. (If you’re somehow still not convinced this is a big deal for web entertainment, it even made the cover of TIME magazine.)

And now, just in time for the holidays, Joss gives fans one more evil little treat: a completely original, special-feature-packing DVD edition which ships on the 19th only from Amazon. If you stop reading right now, take 30 seconds and go buy one (right now) for someone you love (or even just like a little), they will thank you in ways I don’t want to know about.

For those that are still with me, here’s the lowdown on the DVD, of which I was lucky enough to get an early copy to rip apart ruthlessly. I’ll try not to give away too much, especially those well-placed easter eggs since half the fun is finding them.

Joss rallied the cast together to create heaps of new material making the DVD much more than an afterthought, and instead an extension of the Dr. Horrible experience and a must-have for even the casual fans. Stars Felicia Day, Neil Patrick Harris, Nathan Fillion and Simon Helberg all worked almost as much on the DVD as the series itself. And creator-producers Joss, his brothers Jed and Zack Whedon, and Maurissa Tancharoen are all over the special features and commentary.

Commentary! The Musical — this is the true pearl of this oyster, almost a whole new series itself complete with 42 minutes of new original musical fun. Instead of talking over a semi-audible version of the series, they mute out the original, pop up subtitles to remind you what’s being said on screen, and sing an ensemble musical commentary unlike anything I’ve ever seen (or heard) before.

A little teaser…cast is singing about the series’ writer’s strike origins (allegro tempo):

“When you start negotiations with integrity and patience, and they just cry battle stations, what’s to like? When you ask a small amount and then the counters counters counter, and the deal is tantamount to Take A Hike! You can’t sit around with your head in the sand, you pull it out you stand up and you strike!

When you hear the lawyers talking saying our behavior’s shocking it’s as convincing as a cockney Dick Van Dyke. When they leave the town unstable and they come back to the table and say now we should be able—kidding, psyche!”

Evil League of Evil (ELE) Applications — I was completely surprised by how good (or evil) these were. A testament to the fanbase’s creativity, wit and mad video skills. Watch all ten finalists from this summer’s contest to find the next members of Bad Horse’s famed Evil League of Evil. Thirty minutes of YouTube feature-worthy gold. 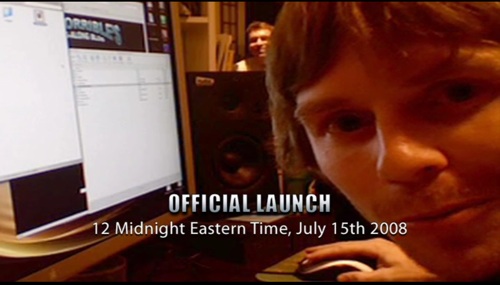 The Making of Dr. Horrible Featurettes — this three-parter: “The Movie,” “The Music” and “What Just Happened?” comprise what is essentially a documentary of the Dr. Horrible phenomenon from its origins and Joss’ chicken-scratched lyrics of the first songs, to script notes with Maurissa and Joss’ brothers Zack and Jed, early rehearsal footage with the cast and on set bloopers. We even get to see the exact moment when Zack clicked his mouse at 12 AM EST on July 15, 2008 setting Dr. Horrible free to the interwebs. That fateful site-crashing day saw “more than 1,000 hits per second” they tell us. And of course, like a good documentary with talking heads we get some delicious moments from the cast and creators: 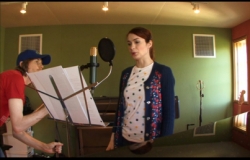 “That indie spirit that Dr. Horrible had, where people feel like they are participating in its success, is so unique.” (Felicia Day, “Penny”)

“The internet has really opened up this huge channel to puts things out, and that puts the power in the artists’ hands.” (Jed Whedon, Writer)

In the end, it’s ABC Family that’s left scratching their heads wondering why they passed on this one after hearing the pitch, leaving Joss to go it alone and self-fund the production. And the DVD is a crowning homage to something bigger than the 42 minute superhero musical, perhaps to the evolution of a movement. After watching, you can’t help but reflect on the power and reach of the Dr. Horrible experience. Creators can now connect directly with fans on their own terms. Give it away for free online? Sure, why not. This is going to change everything, or perhaps it already has.

[Note: Joss even reviewed the DVD himself for Amazon as an impartial reviewer. Good to see he was balanced. At least someone was. Now, go review it yourself.]