Could 'Modern Day Jesus' be the King of Atom.com?

The creator of the hit two-part series Inappropriate Yoga Guy has released a new series on Atom, Modern Day Jesus, an inventive comedy that imagines the historical figure living in present day, facing the same challenges as any other eligible bachelor in his late 20s and early 30s. Created by Oren Kaplan and Avi Rothman (who plays a great Jesus), the series debuted on YouTube a year ago before the pair struck a deal with Comedy Central to release on Atom. The first episodes of Modern Day Jesus, “The Date” and “The Roommate,” which will also be re-released on Atom, garnered nearly one million views and featured G4’s Attack of the Show host Olivia Munn.

According to Kaplan and Rothman, Atom ordered two episodes and acquired non-exclusive rights to the original episodes, with the intention to possibly extend into a more regularly released series. In the current episode on Atom, “Jesus vs. Santa,”  Jesus comes home with his girlfriend Jules (Erin Cahill) to meet the family (Christen Sussin and Alex Staggs) only to find Santa Claus (Ted Michaels), Jules’ ex and Jesus’ nemesis, has dropped in and threatens to spoil everything.

The untitled fourth episode, scheduled to be released before the new year, features Jesus at a bar revealing his troubles with women and addresses “the age-old problem of juggling women with work,” as Rothman puts it. “It’s a struggle every man goes through—always wanting to be with a woman but never wanting to commit. And that’s a problem even Jesus has to work through.” 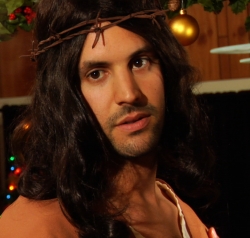 Rothman tells us the idea for Modern Day Jesus evolved while he was playing Jesus in Liam Sullivan‘s viral mega-hit “Let Me Borrow That Top.” Kaplan, who directs My Alibi for Disney affiliate Take 180, has worked with Rothman on several web series and onlide vids. Jesus’ accessiblility and the writing’s universal scope and endless potential for material, along with the great production value, pacing and inventive jokes make this a standout series candidate. And it will certainly catch some attention. There has been quite a bit of backlash from pious YouTube commenters, including death threats. But there may be another market out there—Kaplan tells us that according to YouTube’s Insight Tool a large block of viewers—almost a third—are from Saudia Arabia and Egypt. “We’re bringing laughter to the Middle East one episode at a time.” We’re hoping the best for Modern Day Jesus, and we’ll be sure to keep our fingers “crossed.”