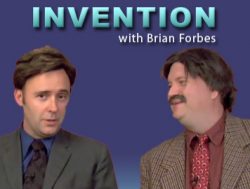 Invention with Brian Forbes, the new web series from comedy team David Beeler and Tom Konkle (Dave & Tom), has been picked up for a distribution deal with KoldCast TV, adding to the growing number of original series released through the Irvine-based broadband TV network. Just like After Judgment and a large crop of the Strike.TV web series, Invention will heading to millions of TiVo DVRs later this month as part of the recently announced deal between KoldCast TV and TiVo’s TivoCast service.

Konkle and Beeler make up the two-man creative team at Pith-E Productions, which is also shopping Is It Safe?, another high brow original series that has been picking up attention as a clever spoof of the CSI-type procedurals. In all, the comedy duo have racked up over 12 Million views so far on their videos according to metrics company TubeMogul.

Invention with Brian Forbes is minimalist British television (on the web of course), complete with a single-color backdrops and fixed public access camera setups. Beeler stars as host Brian Forbes, interviewing his recurring (and only) guest, inventor Sir Reginald Bo-Hey Know (Konkle), on his latest inventions—everything from a new calendar system to a book on cartography and even a new set of “gas pants” (above).

Why would someone want to add flatulence to their own pants?
Sir Reginald: Integrity, sir, integrity.

As co-creator Konkle calls it, “it’s stupid comedy for smart people.” Konkle, who nails a spot-on British accent, is in fact not British at all, joked that, “I’ve actually booked more work as a Brit than as an American.” Invention itself, he added, it really a “two-hander,” a throwback to the old comedy duos that Beeler and Konkle have based their partnership on ever since they first teamed up at the Beyond the Fringe Festival back in 1999. He cites Peter Cook and Dudley Moore, who incidentally was how they first met, along with Bob & Ray as the model for their brand of intelligent, “egghead” humor—”comedy for people without ADD.”

The series will use Koldcast’s website (on the Comedy Series Channel) as its main site, with the first five episodes available now with the release of new four to seven minute episode every two weeks.