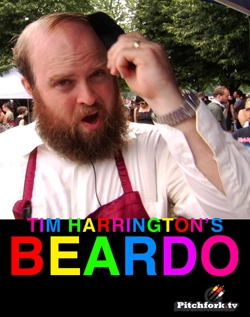 This April Pitchfork, longtime go-to for the latest in independent music, launched Pitchfork TV, an online channel dedicated to chronicling indie music. In addition to posting mini-documentaries, carefully curated music videos, and even some feature films, Pitchfork TV is also the home to the original comedy series Beardo.

Created by Tim Harrington, front man of the New York indie art punk outfit Les Savy Fav and all around cool bearded guy, it’s easy to see how the show gets it’s name. Known for his stage theatrics, Harrington is a natural in the format of the series, which feels almost like a one-man variety show.

In the pilot episode, “Vampiral Dysfunction,” Harrington plays a vampire with performance anxiety (featuring a delightful guest appearance from web star Kristen Schaal), and in subsequent episodes, we watch as Harrington merrily pranks concert-goers by giving them “massages” and “haircuts.”

So what are the plans for Beardo? Tubefilter recently had a chat with Harrington during which he may have, among other things, coined the phrase “high–fiving relationship,” which you should steal and use.

Tim Harrington: Well it was probably down the middle. When [Pitchfork TV] first launched I had worked on some videos to inaugurate the channel where myself and Fred Armisen, the Saturday Night Live comedian guy—we pretended to be sort of Pitchfork bosses who were interviewing potential online talent for the channel, you know, reporters and things. Pitchfork organized an open call cattle call audition in New York for anyone who wanted to be an anchor person on a young, hip music channel, so we got a lot of really funny people showing up to that event, to try and be online personalities for Pitchfork. And Fred and I kind of harassed them. Difficult interviews. So that went really well, and everyone was really happy with it.

So then, since that time, I’ve spent a lot of time talking to Pitchfork because I’ve got a lot of crazy ideas, it’s sort of common knowledge among people who know me—a lot of people tell me that I have a lot of ideas, a lot of things I want to be making and not enough stages to put them on. So Pitchfork had this idea of having The Tim Show and having it be whatever I wanted to do. And that’s what Beardo is.

Tubefilter: Are you guys planning to do a whole season? How many episodes are you going to do?

Tim Harrington: We don’t have a whole episode count yet. I haven’t gotten organized, schedule-wise, myself. You know, I also have this rock band, that sort of travels around, called Les Savy Fav. Beyond that, our goal right now is to do episodes every other Thursday. We’ve got a new episode this Thursday and probably five or six more in the hopper. But I think right now we kind of see it as an ongoing project. Hopefully as the success grows, we’ll become more organized into seasons. You know I’ve got a stack fifty deep of index cards with episode ideas on them, and it’s about how to try and get through them all.

Tubefilter: The pilot is scripted and kind high concept but the next two episodes are more man on the street. What other kind of episodes can we expect? 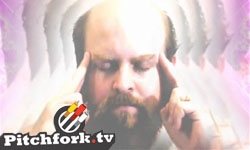 Tim Harrington: The episode that comes out this Thursday is a meditation DVD spoof that is mostly animated, has a little live action. We have an episode that we’re putting props together for that’s a puppet theatre-style episode. I think really the goal is for the show to always service the narrative ideas by any means necessary. I kinda take some inspiration in my personal life from punk music and I think Beardo can take advantage of that concept. If I have an idea for an episode that might go on in space, we don’t have to not do it because we can’t figure out a situation that looks like outer space, but we can—by any means necessary—if it turns out that sitting inside a garbage pail qualifies as outer space, then so be it. We’re keeping the look and feel episode to episode really being whatever the quickest and most interesting way to get an idea across is the goal, we don’t want the aesthetic to be exactly what the audience expects. And since it’s online, you don’t have to answer to the rules of TV where things have to make sense. But I don’t want to take advantage—people’s attitude and appetite is broad. People can understand “Oh, this show can provide me with something different every time.”

Tubefilter: Kristen Schaal guest stars in the pilot—are there any other guest stars and cameos we can expect on the show?

Tim Harrington: Well, I don’t have a lot of them planned right now that I can officially talk about, but, yes. From so much time I’ve spent with my band, I sort of have a high-fiving relationship with a lot of interesting and funny people in music and in comedy. While I’ve been doing Beardo, I’ve been asking them [to be in my show], everyone seems pretty game and excited. I plan to get as many helping hands as possible.

Tim Harrington: We’re playing some shows here and there, around Christmas we don’t do very much, but we’re going to be in Tampa, Chicago, Atlanta, and down south. Hopefully I have time to get everything in the world done.

When Tim isn’t making music or web videos, he’s working on Deadly Squire, a textile company, with his wife. Check out Beardo on Pitchfork.tv.