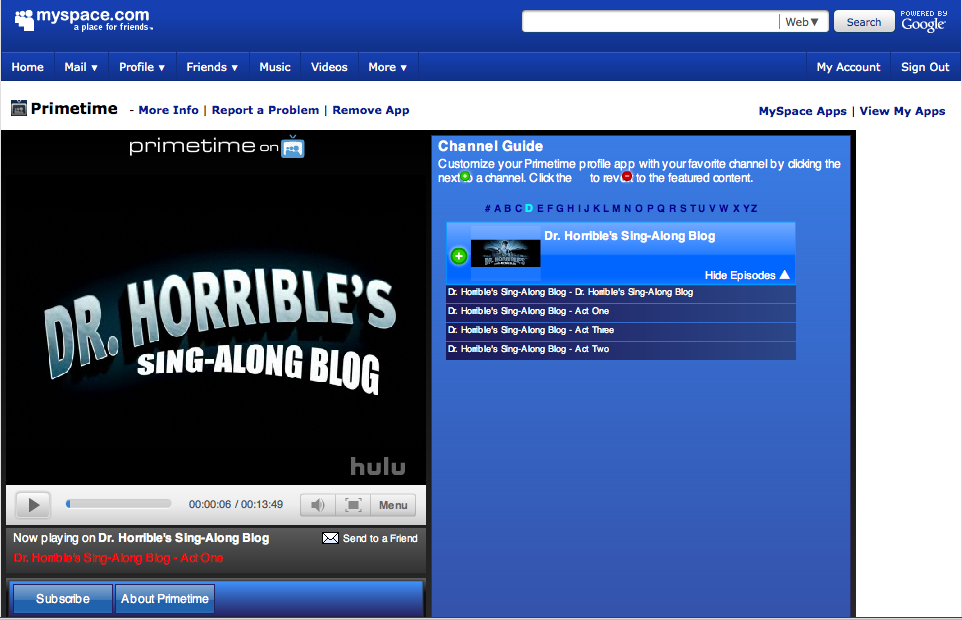 MySpace announced this week the launch of its new MySpace Primetime application which brings the convergence of a whole swath of professional web video content, including short-form web series and full-length TV shows to the over 122 million unique MySpace users. The application is a relatively easy install on any profile page and serves as a hub for finding and watching programs made available through a partnership with Hulu, Warner Bros., Sony and of course all of the MySpaceTV branded channels (over 150) and MySpaceTV original web series including Roommates and Special Delivery.

MySpace’s Primetime community launched back in December 2007 adding (MySpace-parent company News Corp.’s joint venture) Hulu‘s premium TV content from their partners including NBC and FOX. It was a nice start, but really was like a wagon missing its horse. Users had to jump over to the cluttered site to watch any of the full-length TV shows like Hulu favorites 30 Rock, Family Guy, Arrested Development and Saturday Night Live. The Primetime application is essentially that horse that carries the content to where MySpace’s 76 million (US-based) active users actually hang out – on their profile pages.

We installed Primetime on our MySpace page and decided to take a look at it from a web series perspective. Out initial reaction was that it’s a clean, simple interface that makes finding what you’re looking for easy and decently fast. That is of course only if the series you are looking for is available through one of their partners. If the series or the studio behind it hasn’t inked a deal with MySpaceTV or Hulu, it’s unlikely to be available. 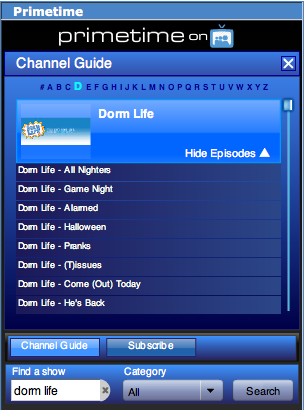 Yes, there are a number of notable web series that are available on Primetime including Dr. Horrible’s Sing-Along Blog (above), Dorm Life, TheWB.com‘s Sorority Forever, quarterlife, and The OnionNewsNetwork. That’s fine and all but it’s still missing a number of standout web series, including several Webby-Award winning hits.

What does this mean for web shows looking to reach the highly attractive MySpace audience? For starters, it highlights the growing segregation between independent and what is being called ‘professionally produced’ content. Clearly, there is a movement upstream in the industry into more monetizable professional video content, even at UGC-hotbed YouTube, who recently signed on to stream full-length CBS shows and entire feature films from MGM.

We checked in with Jason Kirk, VP of Video & Entertainment for MySpace, and asked him about their plans for Primetime eventually becoming an aggregator of all web video content. “We see Primetime as a hub for licensed and professional content but that’s not where the story ends on MySpace – we are a video ecosystem with multiple points of entry that allows data to flow all around the system,” he told us. “This means people can discover and share video in multiple ways be it in comments, email, bulletins, blogs or on their profiles.” 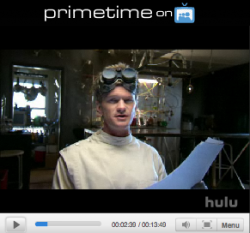 Truly the notable exception here is YouTube, still the top dog in terms of total online video streams. According to comScore, MySpaceTV is chasing them at number two and is apparently focused on quality over quantity. But, many web producers have built out their core audiences through YouTube and won’t be quick to jump ship. There’s also the other premium video hosts which some series have chosen as their home base. At this point, MySpace tells us, there are no plans for content from other video hosts like Blip, Vimeo and Veoh to be available on MySpace other than through the ability to embed them on user profiles.

So, aside from the obvious boost in TV-on-the-internet viewing that Primetime should allow, it’s not clear how much it will benefit most web series. It does however emphsaize the value of partnering with MySpace, as the tools are now in place to actually monetize some of the better web series. Creators will get a revenue share on video streams of their content served through the Primetime application and the rest of MySpaceTV. Kirk added, “the Primetime application is a win-win-win situation — users get great content, partners get more exposure and more time is spent on the site.”