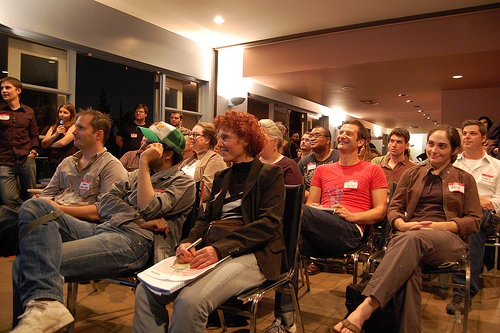 Thanks to all who came out last night for the second monthly Hollywood Web Television Meetup.  Nearly one hundred web tv creators, distributors, buyers, and agents filled the American Film Institute’s Marc Goodson Screening Room pavilion to network and share their experiences in the world of web television.

Kim Evey, producer of the web hits The Guild and Gorgeous Tiny Chicken Machine Show and husband Greg Benson of Mediocre Films (the #27 All-Time Most Subscribed channel at YouTube) gave a tag-team talk about getting into the game early, the importance of connecting to your audience, and the ups and downs of dealing with a major studio.

George Ruiz, Head of New Media / SVP of International Creative Management (ICM), a self-proclaimed geek (the guy builds his own computers in his spare time) gave an inspiring presentation on the bright future of web television and internet video while parrying jabs from Tim Street and tough questions from the audience.

Tyler Malin, co-organizer of the meetup and an attorney representing the web tv space, introduced the advertising standards project for web television. Please email the News Desk if you’re interested in participating in the project.

Other faces in the crowd included Doug Spice from Psychic Bunny, Alec McNayr from Space Shank Media, Bobby Jennings from Wicked Awesome Films, and Mahalo Daily host Leah D’Emilio, along with creators from web shows FEED, Tomboys In Fishnets, Luke 11:17, and Life From The Inside who were mingling about; the boys from Abrams Artists Agency compared notes with ICM’s George Ruiz about representation on the web; Elisabeth Flack from the WGA and Brian Rodda from StrikeTV chatted up with Matt Enlow about his new web series Engaged; Ilsa Berg from Fox Television Studios hinted at some exciting projects on the horizon; and Shira Lazar of NBC’s 1st Look LA stopped by to scope us out.

Thanks again to the folks at AFI for letting us use your space. Stay tuned for next month’s meetup, and please email us if you would like to be included on the mailing list.