More updates on the Dr. Horrible front, which is prepping for the next installment of the sitebuster web series from creator Joss Whedon. September 2nd will be the release date for the web musical’s soundtrack on iTunes. 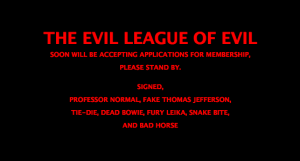 With the upcoming DVD coming together, Bad Horse and his fellow ‘Evil League of Evil’ cohorts, are accepting 3-minute video applications to join the ELOE and earn a spot as one of ten videos included on the DVD extras. So far the site isn’t quite ready for submissions, but check back again soon.

“When people are supposed to be submitting, it’ll be abundantly clear how,” Whedon promised. “Everyone will know.” Dr. Horrible himself, Neil Patrick Harris added, “I would encourage people sending in their submissions to know that the Evil League of Evil is no joke. It’s legitimately hard-core to get in. I would know.”

MTV Movie Blog is reporting there are also plans for a DVD featurette on the aftermath of the first episode’s release, which exploded with over 200,000 hits an hour, and then dominated the top of the iTunes TV downloads chart. “It blowed up real good, as they say,” Joss said. The featurette is also supposed to explore the growing fan-derived content popping up all over the web. 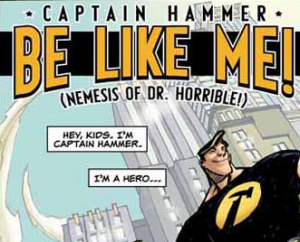 In case you need even more Dr. H to tide you over before the DVD comes out, check out the original webcomics that Whedon and his crew are releasing over on MySpace. The first one, “Be Like Me,” tells the origin story of Dr. Horrible’s nemesis Captain Hammer in a web-friendly 8-page comic. Whedon has hinted at upcoming ones that will explore the origins of more of the Dr. Horrible cast, including Moist and Fake Thomas Jefferson. Eventually, fans can even order these in print form as part of the MySpace Dark Horse Presents Collection.