Felicia Day Tapped by Machinima.com To Write and Star In New Series 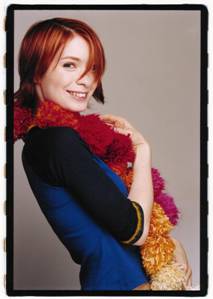 Machinima.com has hired the internet phenom Felicia Day to write a sitcom set in a place close to her heart–a popular video game. Five short-form episodes will eventually be combined into a half hour pilot with plans to hit the web this fall, and it’s rumored audience feedback will affect the creative direction of four more such half hours. Machinima, or machine cinema, is an example of artistic computer game modification where game tools are used to render CGI using real-time 3-D engines.

If there were royalty in the world of online web series, Felicia Day would be the Grand Duchess. Her first creation, The Guild, garnered almost two million views, higher than some of the popular shows on television. She co-starred alongside Neil Patrick Harris in the sitebuster Dr. Horrible’s Sing-Along Blog, created by Joss Whedon, creator of the television series “Buffy the Vampire Slayer,” which features Day in eight episodes.

With her natural talent tucked into clever, current, interesting and honest choices, there’s no telling exactly what she’ll reveal next. Day handed off a rough draft of The Guild: Season 2 to her co-producer within the past 24 hours.

Tubefilter was lucky enough to catch up with Felicia Day to talk about her new project.

Tubefilter: What’s the show about?

Felicia Day: The project I’m working on with Machinima.com is a sitcom set inside a game world. I’m still developing it, so that’s all the detail I can go into.

TF: So will it remind us in any way of The Guild?

Day: I guess it’s the reverse of The Guild in that it’s a sitcom using game machinima and characters, vs. The Guild being about gamers’ real world lives.

TF: Who are the characters?

Day: I wanted to take some archetypal characters from sitcoms and place them in a fantastical world. I’m sad the sitcom form is no longer considered “viable” because it’s what I grew up on and love, so I took it as a challenge to mix old and new together and create something funny and enjoyable for everyone, gamer and non-gamer.

TF: Is anyone coming back from The Guild?

Day: No this is a completely separate project. It’s great to have both on my plate; I can bounce back and forth between them.

TF: Is the show cast?

Day: The actors are TBD. We’re still in the script stages. Getting a good script is the most important thing in making anything. If you don’t have that, you shouldn’t bother with anything else. I’d love to have some real gamers do the voices.

TF: When can we expect to see the first episode?

Day: The Machinima.com project will hopefully be out this fall.

Day: The Guild: Season 1 DVD is available on the site, so check it out if you’re a fan!