'Dr. Horrible' Could Bank $2.6 Million Even Before DVDs 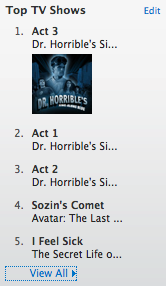 Proof of concept? Joss Whedon spent around the “low six figures” out of his own pocket to shoot Dr. Horrible’s Sing-Along Blog, and after a whirlwind launch the summer sitebuster could bank over $2.6 million, according to some number crunching by Jeffrey McManus. McManus estimates that number assuming one million iTunes downloads of the series at $3.59 each, after Apple’s share (10%) of the $3.99 sale price. With the show already dominating the top of the iTunes TV downloads chart, this very well could be a possibility.

Whedon himself commented on his blog, confirming that “the guestimates were not far off, as far as I noticed.” He added, “This was a sensible article on a subject that will, if we beret-wearing artistes have our way, will matter very much.”

To get an idea of how many were able to watch it during its 5-day free viewing period at the DrHorrible.com site, here are the initial Hulu view counts by Act: (courtesy of David Sarno at the LA Times)

All this further turns heads in the industry, as Hollywood is starting to notice that top name talent like Joss Whedon, who admittedly has a considerable and loyal following, can self-distribute original content outside of the traditional studio system. As for Dr. Horrible – we’ll be looking forward to the sequel.