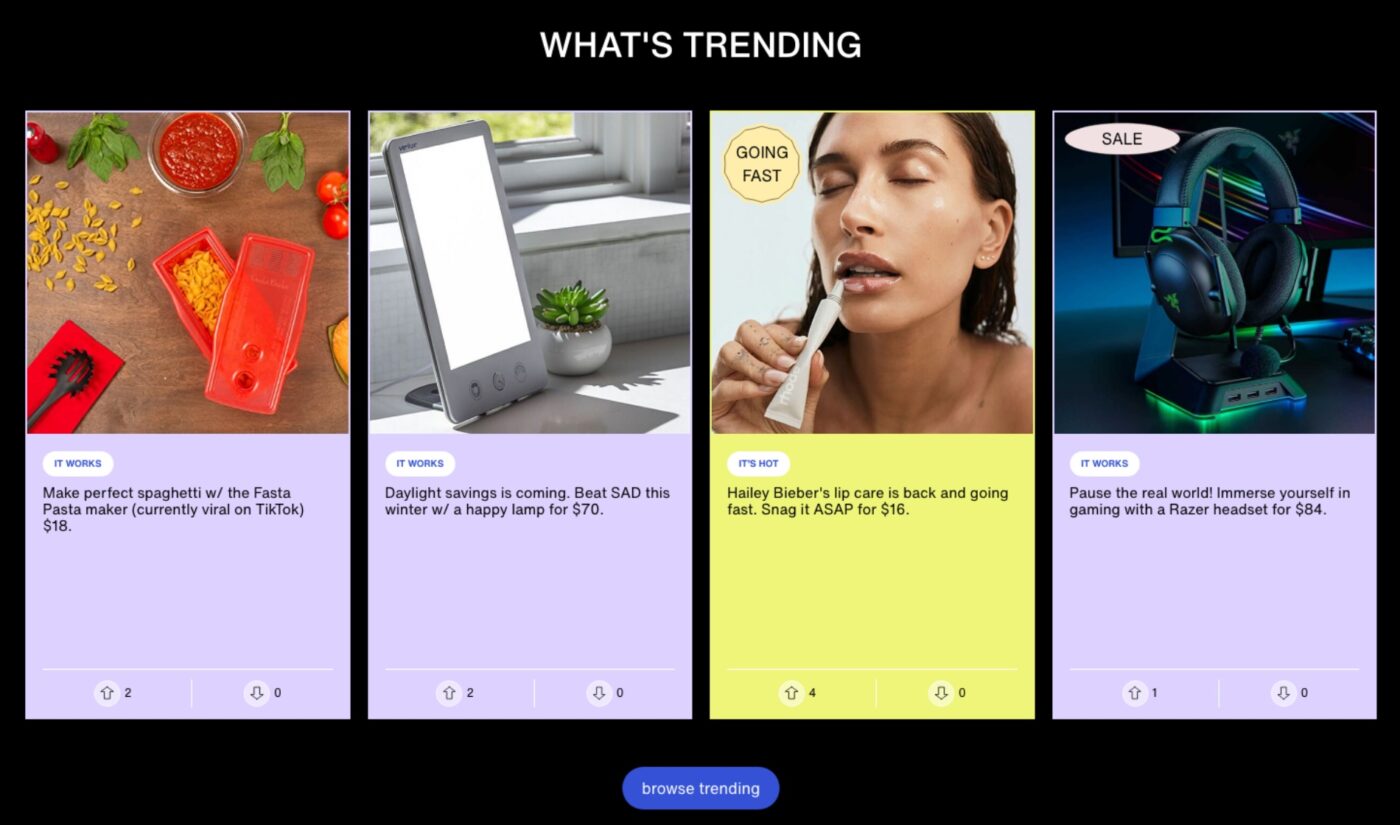 What if an ecommerce platform aggregated all the must-have products that are trending on social media? That’s the idea behind FirstFinds, a new hub launched by Hearst on October 24.

Visitors who check out FirstFinds are able to peruse more than 1,000 products, which are arranged across five themed shelves. Depending on the priorities that inform your purchases, you can shop what’s hot, what’s fresh, what’s wild, what’s green, or what works. Within each of those categories, FirstFinds users can deliver Reddit-style upvotes and downvotes, thus alerting fellow shoppers about the platform’s best and worst deals.

Hearst Executive Director of Commerce and Content Strategy Christine Anderson told Digiday that the selection of wares on FirstFinds was curated by a five-person team, which picked out products that met specific guidelines. If an item is “never on sale but it is today,” or if “you see it all over your feed,” it was flagged by the curators, Anderson said. Hearst will make revenue from FirstFinds purchases through affiliate marketing, though details about the platform’s exact monetization model haven’t been shared.

FirstFinds arrives at a time when major social media and video platforms are trying to figure out what role live shopping will play in their future operations. In the past year, TikTok, Facebook, and Instagram have all decided to roll back their ecommerce ambitions, though some of tech’s major players continue to test those waters. YouTube, for example, is bullish on its shoppable videos, while TikTok is planning a big ecommerce expansion in the U.S. this holiday season.

Going up against YouTube and TikTok would be a daunting task, but Hearst’s higher-ups believe that FirstFinds can coexist alongside bigger players. “It’s not to compete with the social platforms themselves,” Hearst SVP of Consumer Products and Partnerships Saheel Shah told Digiday. “I look at it a little bit more like a community platform.”

FirstFinds will also be separated from Hearst’s editorial brands, though the two divisions of the media conglomerate will have some synergy with one another. Content from Hearst brands will feature products that are available via the new hub. In a recent video, Hearst-owned fashion mag Elle shared some of Olivia Wilde‘s best red carpet looks. Now, one of those looks is available through FirstFinds.

The biggest challenge will be attracting users to FirstFinds. The platform had its official launch on November 1, so if you’re feeling the urge for a shopping spree, you can help Hearst solve one its trickiest problems.