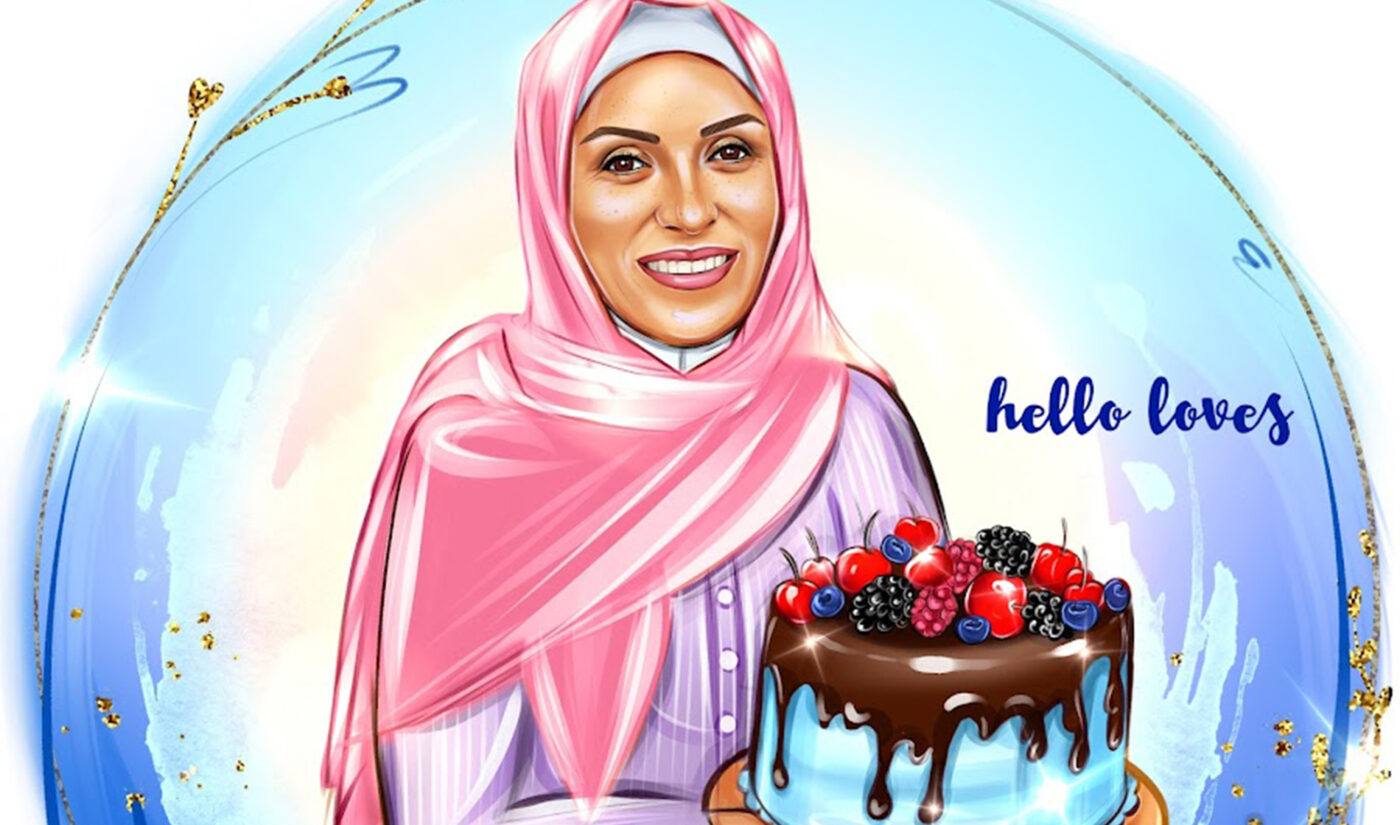 It’s the only way she–a one-woman bakery operating out of her home kitchen–can keep up with demand.

When she first started making cakes, Hachem-Osseili didn’t expect it (let alone running a YouTube channel about it) would become her new career. She went to university for teaching and taught middle school for ten years…until it became clear that paying a daycare bill for three kids was eating up her entire salary anyway. So, she quit. But she’s not capable of just sitting around the house, she says. Even with three kids, she needed something else to keep her busy.

That thing ended up being cakes. Hachem-Osseili is the oldest of five siblings, and she’s always made her younger siblings’ birthday cakes. She’s also a painter, and the kinds of artistic cakes popular on social media seemed like the perfect way to blend her passions together.

Hachem-Osseili originally started uploading her cakes to Instagram, but soon branched out to TikTok and then YouTube. People weren’t just interested in seeing pictures of the final product. They wanted to see the whole creation process. And then they wanted even more. They wanted to know how she manages to make so much homemade fondant, how she juggles dozens of cake orders a month, and how she deals with difficult customers.

She figured out a way to answer all these questions and also keep herself on track with her rigorous weekly production schedule: Bake My Day Mimo. 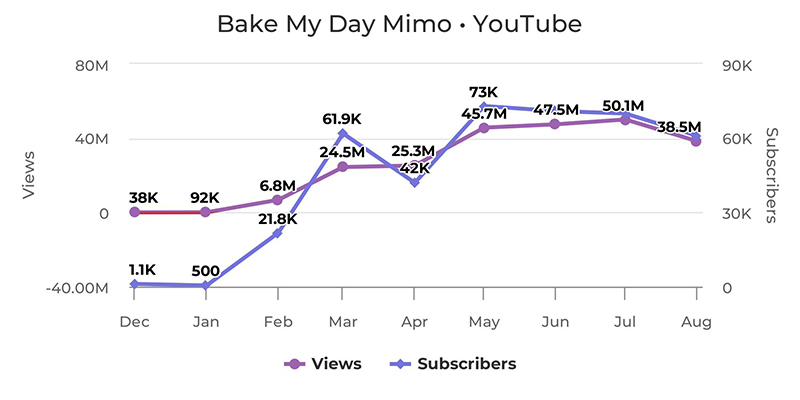 She committed to daily uploads that both follow her process–on Mondays, for example, she bakes fresh cake layers, and on Tuesdays she makes all the fondant toppers for that week’s orders, and on Wednesday she soaks the cakes in simple syrup to keep them sprightly–and regularly answer questions from her viewers.

That upload schedule has helped push her channel from around 10,000 views per month to, now, more than 50 million per month. In the same timeframe, her audience has grown from around 1,000 subscribers to nearly half a million.

Hachem-Osseili still can’t believe YouTube is actually working out for her, but she’s got her eyes set on hitting a million subscribers–and she’ll bake every day to hit that goal.

Tubefilter: So for those who may not know you, tell me a little about you, where you’re from, and how you ended up on YouTube.

Mirvat Hachem-Osseili: So my name is Mirvat Hachem-Osseili. I was actually born in Lebanon and came here when I was five to New Jersey, then to Michigan, and then I actually got my degree in teaching. I taught for about 10 years total. I used to teach fifth grade. I even got my master’s in ESL, which is English as a second language.

Then I had three kids. So my youngest, when he was born, I was telling my husband that the teaching salary is awful, especially for a charter school. I was like, “By the time it goes toward daycare and all the other things I need to help me out, we’re gonna end up with like, what, a hundred dollars a week? Is this even worth it?” So he was like fine, if you wanna quit, then quit, and at that point it was more for the healthcare, so I quit.

But I’m a very active person, I can’t just sit still at home. So I started making cakes and he kinda laughed at it, because I was making pennies on the dollar. He’s like, “So this is what you wanted to do?” And I was like “Yes! Okay! I need to get my juices flowing!”

MHO: When I was younger, I’m the oldest of five girls, and coming from immigrant parents, and immigrant family, I was kind of like the second mom. So I kind of did a lot. And for their birthdays, my mom never really planned their parties. It was always me. So I always made the cakes, and it was always just cake box mix, which I still use now, but it was also just canned frosting and I would decorate it to the best of my ability. So I always made all of their cakes for everybody’s birthdays.

Even when I got married, I made my husband’s cake. I make my kids’ birthday cakes. So then when I watched Cake Boss, this whole new idea of cake artistry, I guess, started. Because I’d always made art with cream, but then fondant came in and it just gave a whole variety of techniques and looks and everything. I was like, “Oh my gosh, I really wanna do that.” That’s what motivated me or inspired me to start.

Tubefilter: How did that transition to you being on Shorts?

MHO: It all started on Instagram and from Instagram I moved on. Instagram was not helping me whatsoever with the internet, social media. So I moved to TikTok. Somebody was like, “Try TikTok.” And I was like “All right, fine.” So I tried that. I’d seen my daughter’s account, and I was like, “I’m not a dancer. I can’t do that.” They’re like, “Mama, it’s not just dancing. It’s other stuff too.” I was like, “All right, fine, I’ll try it.”

So then I moved onto TikTok, and–Dylan Lemay, do you know him?

MHO: We’re friends as well and he was all over YouTube. He’s like, “You gotta do YouTube.” I’m like, “I’ve been on YouTube, I started a long time ago and it didn’t do anything for me. It’s hard to edit. It’s hard to keep up.”

He was like, “Yeah, but they started this thing called Shorts. I really think you’d do great.” I was like, “Okay, I’ll give it a try. Why not?”

He seemed to be doing amazing, you know? And then that’s when it started. It just grew from there. And I myself was in shock when it started. Like I was showing my kids, I was showing my sisters. Like, this is unbelievable! And I don’t know if you can see behind me, my YouTube plaque, it’s so awesome. All the little kids come over and they see it. It’s the best. Even the teenagers, their teenage friends come over and it’s like shining behind them.

MHO: It’s awesome. I love it. When it came in, my husband—he doesn’t do the whole social media thing, but even he was like “Yeah!”

Tubefilter: Intriguing how you got on Shorts. Do you think if Shorts wasn’t a thing you wouldn’t be doing social media as much?

MHO: If Shorts wasn’t so huge and so helpful for my YouTube page, honestly, I don’t think I would have, just because it gave me the motivation, you know? So now I’m throwing Shorts up practically daily. I do a couple a day actually. Then when I can, I try to edit the longer videos, which are very hard and time-consuming and I feel like require a lot of good-quality camera work, good editing skills. But the Shorts really have helped like tremendously.

Tubefilter: When did you notice your channel starting to take off? Was there a specific video, or…?

MHO: It was…gosh, I wish I could remember what it was. It was when I started Shorts, but I don’t know what specific video. In the beginning it was like 10 million views a week, I would say, I don’t even know. And I was in shock. I’m telling you, I was, I would show my friends. I’m like, “This is insane. I don’t know what’s going on, but hey, I’m here for it.” So it did die down a lot, but it’s okay. I’m super, super grateful for every follower and for every supporter. It’s still awesome.

Tubefilter: Is your growth now just more kind of slow and steady?

MHO: It fluctuates. It’s not like it was when I first started Shorts, but again, I don’t mind. I’m grateful, and on my way, hopefully, for that million. I hope so.

Tubefilter: One thing I wanted to bring up specifically is I’ve seen you talk about how you think TikTok is suppressing your content. I’ve spoken to people who are like subsistence hunters who know their stuff gets shadowbanned because they’re showing live animal hunting, fish killing and deboning, that kind of thing. But I cannot see why your content, why cakes, would be objectionable.

MHO: [tugging her hijab] This is the big one right here. This thing on my head. I can a hundred percent, I will put my life on it, this is the reason why TikTok suppresses my account. If you go to my page, I have 3.6 million followers. And I’m not saying it’s great or anything, but the views for my followers are just…they make no sense whatsoever. Like 15,000 views, 25,000 views. I mean, what is going on, you know?

It’s just very, very upsetting and I have no motivation whatsoever. I get nervous to write out comments because they’ll find my comments on other people’s videos and then they’ll ban the comment. And I’m like, “What did I say?” I’m very careful if I get into anything political, because it does get banned.

It’s ridiculous. I think one time I was making fondant fully dressed, as you can see, fully dressed, and it flagged it. They took the video down for adult nudity and sexuality. And I was like, “I could NOT be more covered. I don’t know what you’re asking me for!”

TikTok really is…I’m done with them, really. That’s why I love YouTube. They’re awesome. They only take things down for ike copyright, if I accidentally have a song in the background. That’s pretty much it.

MHO: Yeah. It’s so awful because I know I can get so much more and I’m just not given that opportunity, you know?

Tubefilter: Ugh. Yeah. So for YouTube, what does your production schedule look like? You post every day and have a daily baking schedule, so that must be tough.

MHO: It is honestly very time-consuming. I told my husband when it was starting to grow, you know, “This isn’t something I’m playing with.” It’s very time-consuming to try to keep up and edit and everything. There’s so many videos on my phone that I have to fix, but I feel like what helps me is my cake schedule.

So I have to bake on Mondays. Otherwise I’m down for the rest of the week. I have to make my toppers on Tuesdays or I have no time on Wednesday because of my Wednesdays when I fill and ice. Most of my cakes, if I don’t do that on Wednesday, then I’m put behind on Thursday, where I’m mainly decorating Thursdays, Friday, and Saturday, my decoration days. That is what takes the most of the time. Because of that, I feel like I gotta be on schedule, which in turn I’m like, okay, I’m doing this. I might as well just record it. Which then in turn leads to the daily post.

Tubefilter: Do you have any goals for yourself and your channel and your business for the next year or so?

And he’s like, “Yeah, but you wouldn’t have it if it wasn’t for my, because you quit teaching and started baking because of me.”

I’m like, no, I’m the one who worked for this. And he’s like, yeah, but you wouldn’t have it if it wasn’t for me, cuz you quit teaching and started baking. So it’s because of me that you

Tubefilter: He does have a point…