Creators On The Rise: The YouTubers behind Not What You Think had no plans for their channel. It’s about to hit 2 million subscribers. 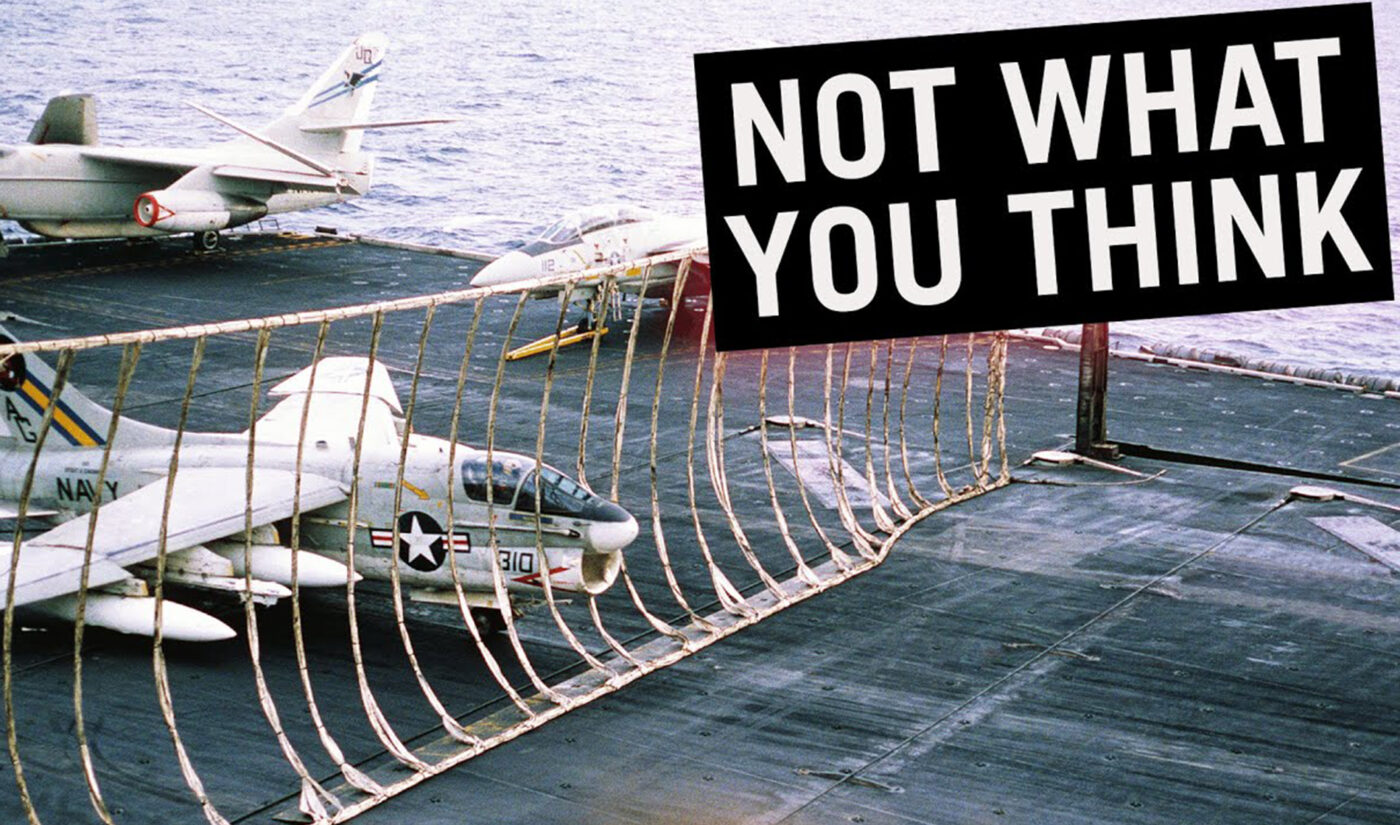 Tuxton and Rodney‘s YouTube channel started with a beer in hand.

The two friends were chilling at a cottage when Rodney pointed out that Tuxton has a voice made for narrating. Tuxton, who’d heard that before, brushed it off. But when Rodney brought him a script a few weeks later, hoping to get a channel off the ground, Tuxton agreed to record it.

Neither Tuxton nor Rodney were sure where they wanted their channel–called Not What You Think–to go. As Tuxton puts it, “We didn’t really know what the videos were going to be about, but we had to start somewhere.”

So, they started with electricity. Then pregnancy. Then that viral diagram of bullet-riddled World War II planes and the logic of armor reinforcement. That one took off (no pun intended) on YouTube Shorts, prompting the duo to wonder if maybe military tech was the right niche for Not What You Think.

The answer is…sort of. In the year since launching their channel, they’ve made a lot of videos about military technology, and many of those videos have racked up tens of millions of views.

In between those videos, though, Not What You Think has retained its “let’s try it and see” feel. While lots of Tuxton and Rodney’s videos are about tanks and aircraft, the duo also deviates to other topics, like least fun ways to die, new car stress-testing, and the Yamal LNG natural gas project. 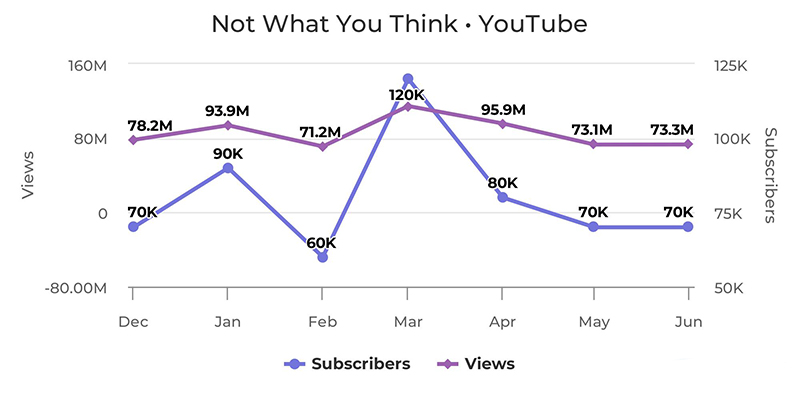 In a little under a year, Tuxton and Rodney have taken Not What You Think from zero subscribers to nearly 2 million, and their views these days are holding steady at more than 70 million a month.

Check out our chat with Tuxton below.

Tubefilter: So first, tell us a little about you! Where are you from? What did you get up to before launching Not What You Think?

That phrase has changed the lives of two friends who co-founded Not What You Think in the middle of COVID lockdowns in Canada. I (Tuxton, the narrator) have a background in computer science, and Rodney (the editor) has a background in psychology. We are in our 30s, and before starting the channel, we both had a career in our respective fields.

Tubefilter: What made you decide to launch a YouTube channel? Looking back at your oldest videos, you seemed to jump right in knowing exactly what kind of content you wanted to make. Is that accurate?

Tuxton: We were having some beers at a cottage and talking about YouTube when Rodney asked me to narrate something. I think I pulled up something from Wikipedia and read it out loud. “You have a good narrating voice!” he said. “You should start a channel.”

I didn’t take it too seriously. I had heard that comment about my voice from others many times before. A few weeks later, Rodney said he had an idea for a YouTube channel. He had written the first script, and all I had to do was record it, and man, am I glad that I did!

Even though the majority of our current videos revolve around technology and historical events related to the military, when we started the channel, our main goal was to produce high-quality “edutainment” videos, but not in any particular domain.

Tubefilter: A lot of your videos are about aircraft and ships. What fascinates you about these things?

Tuxton: If you put aside the dark side of the military, the technology itself is quite fascinating. Many of the things that our day-to-day lives depend on started as military R&D projects (e.g. GPS navigation). But Rodney and I knew nothing about the military when we made our first military-related video. It has been a fascinating journey to learn more and share those learnings with millions of viewers in an easy-to-consume format.

Tubefilter: How do you come across the facts you share on your channel? Are you sort of an information sponge, where you’re making videos about tidbits you’ve collected over the years, or do you go hunting for interesting info to share with viewers?

Tuxton: As I mentioned, neither one of us have a military background, so every single video that we have produced is a result of extensive online research. On occasion, we have also consulted experts on specific topics. Most of the time, we are genuinely curious about a topic, and once we research it and learn more about it, we feel compelled to share it in video format.

Tubefilter: Your channel has seen a big boost in view and subscriber growth lately. Do you know if there was a specific video that took off and prompted that, or has it been a rise across all videos?

Tuxton: We are very fortunate to see the growth that we have, and of course we owe that to all our viewers and fans around the world who enthusiastically watch our channel. We have also been quite focused on the quality of our work, the consistency at which we publish, and of course a huge boost that came with YouTube Shorts, which we were an early adopter of.

We went from zero to one million subscribers in 10.5 months. Now that’s something we’re quite proud of!

Tubefilter: OK, we have to know: Where did the channel name come from? Why “Not What You Think”?

Tuxton: When Rodney contacted me with the concept for the channel, his idea was in fact “Not What You Think.” I mean, he had already come up with the name for the channel, and he gets all the credit for the name! It’s a fantastic name and concept for a YouTube channel. We didn’t really know what the videos were going to be about, but we had to start somewhere. In a way, Not What You Think is not what we thought it would become either!

Tubefilter: What’s your filming/posting schedule like? Do you try to film every day? Do you film videos in batches? Do you pre-plan, or film spontaneously? Do you have a set posting schedule?

Tuxton: We split the research and scriptwriting 50-50, meaning that half of the videos are researched and written by Rodney, and the other half by me. I typically do the final edit of the script, where some humor may also be injected. Then I record the voiceover and Rodney puts the final video together.

We are a voiceover channel, so we basically don’t do any filming of our own, with some exceptions for sponsored posts and so on. We initially started by posting five Shorts per week, then transitioned to four Shorts and one long. Currently we publish three Shorts and one long every week. Since the channel is still run just by the two of us, we have quite a busy schedule. Most videos are completed a few days before publishing.

Tubefilter: Is YouTube your full-time job? If yes, when did it become a full-time thing for you? If no, what else are you up to career-wise?

Tuxton: Not What You Think is actually Rodney’s second YouTube channel. He still runs the first channel, but most of his time is spent on this one due to the success of our channel and the demanding schedule that goes hand in hand with it. He has been a full-time YouTuber since 2018.

On the other hand, I have focused on YouTube full-time only since February of 2022, which means I had a lot of evenings and weekends dedicated to working on the channel while I still had my full-time job.

Tubefilter: How have things changed for you, personally and professionally, since your channel started taking off? Have you had any cool opportunities?

Tuxton: I guess you could say it’s a dream come true for both of us. We have a successful channel that reaches millions of people every day, many of whom seem to learn from our work, enjoy our humour, and have an overwhelmingly positive experience with our content. The channel allows us to work anytime and from anywhere in the world, making it possible for us to travel while we continue to make content (I am currently on a trip in Europe as I am doing this interview).

Tubefilter: Do you have any plans or goals for your channel for the rest of this year? Any projects you can share?

Tuxton: We want to get to a point where we can publish two long videos per week. This will, of course, require finding talented people to help us, which we are starting to look for.

We have a Discord community that we would like to dedicate more time to, where we can interact with our fans in a more intimate environment.

We are also interested in starting a second channel at some point. We are not sure what it’s going to be about, but one thing is for sure…it is (not) Not What You Think!