‘Unofficial Bridgerton Musical’ was a Grammy-winning TikTok smash. Now Netflix is suing its creators for infringement. 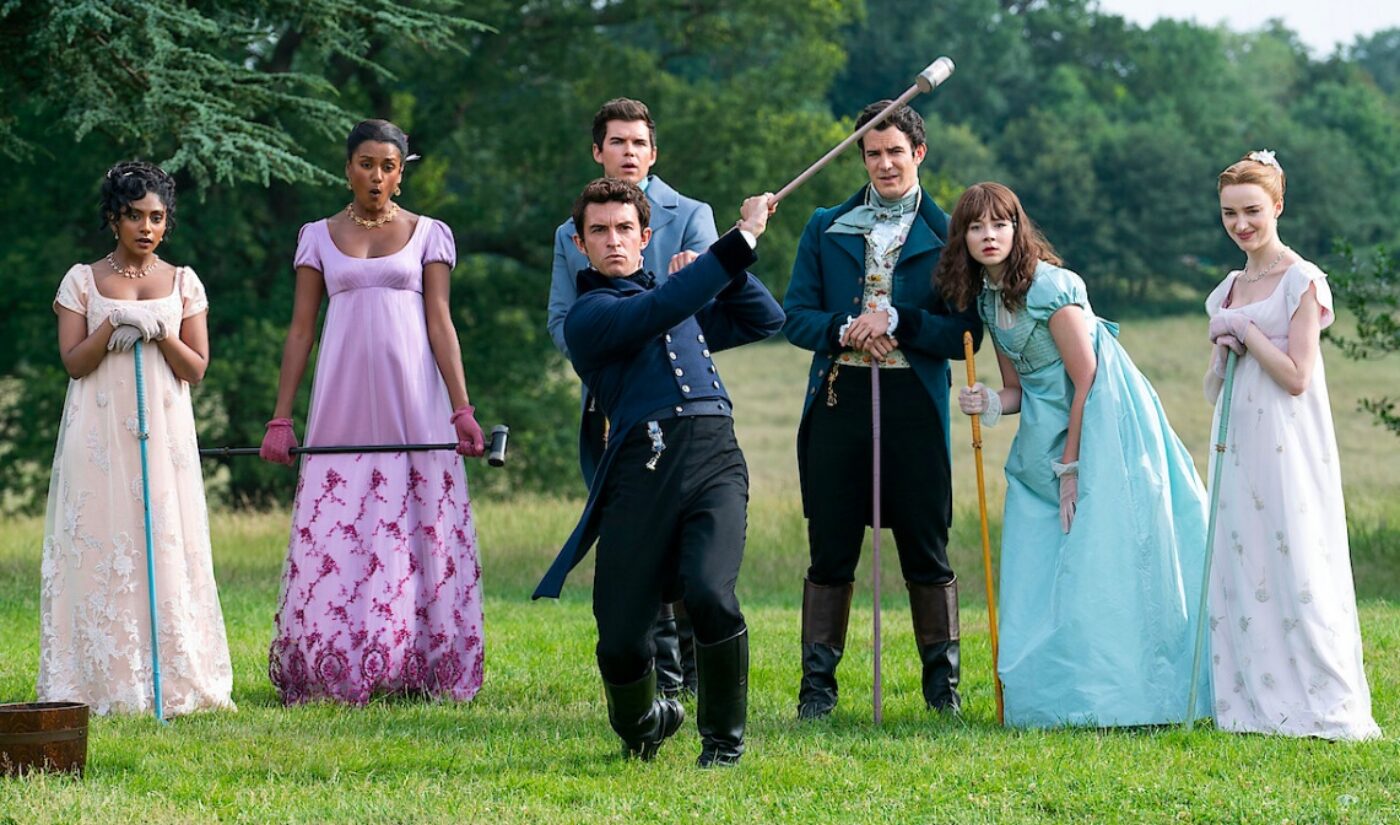 The curtain may be closing on TikTok’s favorite musical.

Netflix, which has distributed two seasons of Shonda Rhimes‘ romance series Bridgerton, has filed a lawsuit against the creators of the ‘Unofficial Bridgerton Musical‘ that went viral and won a Grammy Award earlier this year. The suit alleges that Abigail Barlow and Emily Bear borrowed the IP of the steamy Regency Era sensation and turned it into a live stage show despite “repeated objections” from the streamer.

“Defendants Abigail Barlow and Emily Bear and their companies (“Barlow & Bear”) have taken valuable intellectual property from the Netflix original series Bridgerton to build an international brand for themselves,” reads the complaint. “Bridgerton reflects the creative work and hard-earned success of hundreds of artists and Netflix employees. Netflix owns the exclusive right to create Bridgerton songs, musicals, or any other derivative works based on Bridgerton. Barlow & Bear cannot take that right—made valuable by others’ hard work—for themselves, without permission.”

Like so many other TikTok stars, Barlow and Bear rose to prominence during the pandemic, when they charmed audiences with captivating songs inspired by Bridgerton‘s characters and plot. Their tribute to the series was a viral hit, especially within TikTok’s musical theater community. Millions of views later, Barlow and Bear completed a 15-song ‘Unofficial Bridgerton Musical‘ album, which propelled them to victory in the Best Musical Theater Album category at the Grammys.

The trouble with Netflix began when Barlow and Bear adapted their songs into a live stage show at the Kennedy Center. The two musicians performed at the venerable Washington, D.C. venue during its 50th-anniversary celebration. Barlow sang alongside Darren Criss, Bear provided a piano accompaniment, and the trio delivered a soaring rendition of ‘Ocean Away.’

Barlow and Bear returned to the Kennedy Center on July 26 for a live stage show. According to Variety, ticket prices for that performance ranged as high as $149. In the days after the show, a few clips from it popped up on social media. Then Netflix officially filed its lawsuit in Washington, D.C.’s U.S. District Court.

Netflix and members of the Bridgerton creative team claim that Barlow and Bear established “multiple revenue streams” without receiving permission from the platform, Rhimes, or Julia Quinn, who wrote the books that inspired the Bridgerton series. The streamer’s legal filing also takes a swipe at the two musicians themselves, who allegedly “refused to cooperate” with the Bridgerton team.

In a statement, Rhimes had her own strong words for Barlow and Bear. “What started as a fun celebration by Barlow & Bear on social media has turned into the blatant taking of intellectual property solely for Barlow & Bear’s financial benefit,” said the powerhouse producer. “This property was created by Julia Quinn and brought to life on screen through the hard work of countless individuals. Just as Barlow & Bear would not allow others to appropriate their IP for profit, Netflix cannot stand by and allow Barlow & Bear to do the same with Bridgerton.”

The legal proceedings could determine whether the word “unofficial” lends credence to an argument for fair use. It will also be interesting to see whether TikTok issues a statement on the lawsuit. The short-form video platform played an instrumental role in 23-year-old Barlow and 20-year-old Bear’s ascendance, and the two creators of ‘Unofficial Bridgerton Musical’ are now beloved figures. Based on the response Barlow and Bear’s Kennedy Center performances have generated, Netflix’s actions will surely trigger intense backlash from the musical’s fanbase. 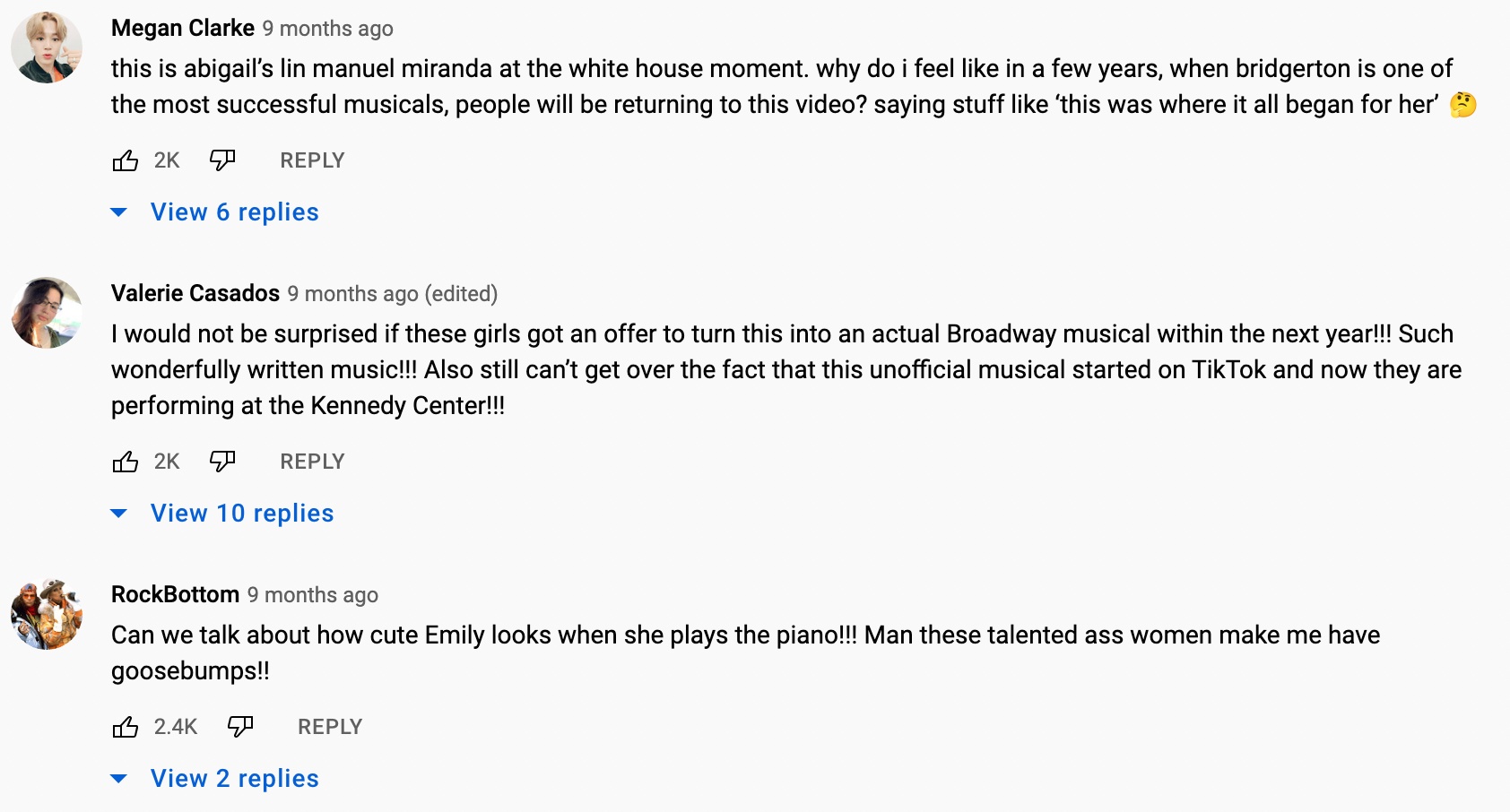 By aligning with these rising stars, TikTok could get a jolt of positive PR. It has its own plans in the musical theater world, since it hired Daniel Mertzlufft to create a musical called For You, Paige. Mertzlufft found his own viral success with a project called ‘Ratatouille: The Musical.’ Netflix’s lawsuit makes me wonder what Disney thinks of Mr. Mertzlufft’s opus.

Now that Barlow and Bear have been accused of infringement, they’ll have to decide whether the plan to follow through on additional live performances of the ‘Unofficial Bridgerton Musical’ catalog. The musical duo is scheduled to play London’s Royal Albert Hall on September 20 — at least for now.