Creators On The Rise: Truck driver Alex Nino takes viewers on the road 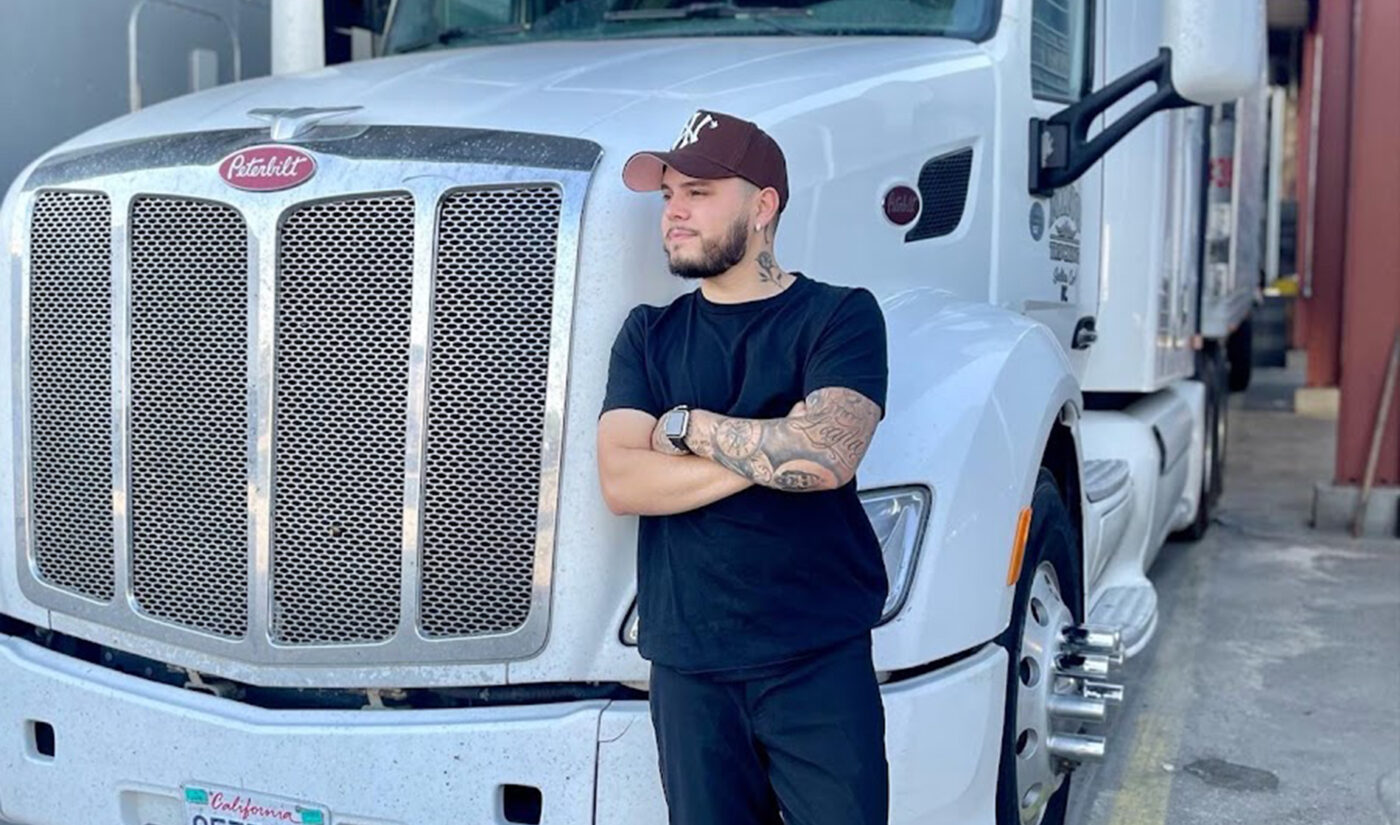 When Alex Nino started his YouTube channel back in 2018, he wanted to give viewers a peek into his life. His videos were low-key, down-home content. He hung out with his kids. He got a haircut. He flipped tortillas. He grew a beard.

But the people tuning in to his videos weren’t necessarily focused on the clips’ main events. They wanted to know what was up in the background. Why did his filming environment change so often? Why was he away from home? Why did his bedroom “look like a spaceship”?

Instead of telling commenters, Nino showed them: He was–and is–a professional truck driver making videos on the road.

To his surprise, viewers were into it. Like, really into it. His previous videos had been netting a few thousand views each. His new clips, like one about how much he makes as a trucker and one about scary driving experiences, started bringing in millions.

Nino, who’s 24 and began truck driving after encouragement from his uncle, has now been uploading job-related videos for almost a year. In that time, his channel has surged from under 1,000 subscribers to nearly 300,000, and from fewer than 20,000 views per month to more than 30 million. His growing viewership has changed his entire life, Nino says, but that doesn’t mean he plans to stop driving.

“This is my career and I get to share it with the world, and it makes it that much more fun,” he says. 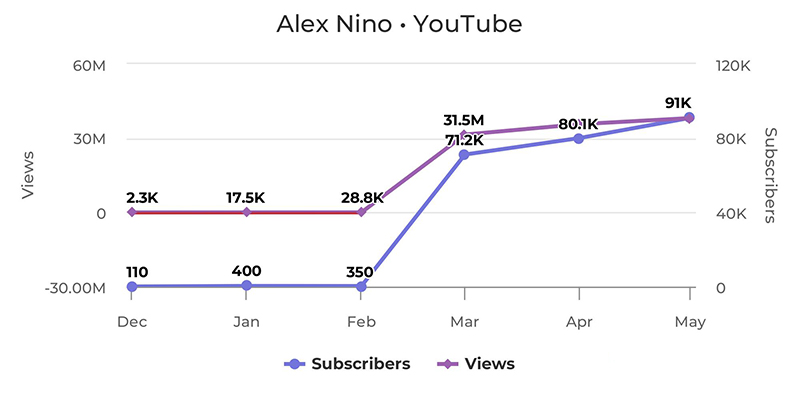 Tubefilter: Let’s jump right into it! Your channel has been growing really quickly, and one of the main reasons it caught my eye is because I dig channels where people make videos about their jobs. What made you decide to start creating videos about being a truck driver?

Alex Nino: So I started making trucking videos because before, I used to make different kinds of content, and I was always inside my truck, and I would always get comments and people telling me, “Where are you?” “Why does the background look like that?” “Why does your room look like a spaceship?” So then one morning I decided to make a video of my nighttime routine, and the rest is history.

Tubefilter: OK, backing up for a second. For those who may not know you, where are you from? How did you get into truck driving?

AN: So my name is Alex Nino and I’m a 24-year-old truck driver. I’m from the central valley in California. I got into truck driving when my uncle introduced me to it and told me to quit my old job and he would pay for my schooling and get me a job on the spot as soon as I got my license.

Then a year went by and I was about to have my second kid and I still had a warehouse job where I was struggling (financially), and that’s when I realized, “Damn……..I need to start making more money.” So I took my uncle‘s offer and and I started truck driving.

Tubefilter: Do you remember if there was a specific video that took off and really propelled the views and subs growth on your channel? Or was there a collective rise across videos?

AN: So the video that really took off for me and gave me the following I have was one where I showed my followers my nighttime routine, including my seat belt trick. They seemed really fascinated by the seatbelt trick, and I explain to them that I do this when I stay in sketchy areas. I believe that video got over 2 million views in less than 24 hours, and right now has over 20 million views.

Tubefilter: What does the average day look like for you? How do you fit video-making into things?

AN: An average day for me is pretty much either waking up in my truck or waking up in my bed at home and getting ready to go into my truck. Honestly, fitting videos into my day can either be really stressful or really easy just depending on how my day is going at work. There’s times where packing houses will take forever, and that’s when I’m able to knock out like five videos in one sitting. Then there’s other times where I don’t have the time at all, and I stress out about even making one video.

But I discipline myself to make sure I’m consistent, because, after all, consistency is key to success.

Tubefilter: Sort of a related question, but do you have anyone helping you behind the scenes? An editor or anything? Or are you a one-man show?

AN: So behind the scenes, I don’t have anyone helping me other than my wife. She’ll send invoices out to companies that I get sponsorships from. But besides that, I don’t have an editor, everything is all me. And I like it that way–I feel like it’s more natural. It’s still fun for me and I feel like if I were to get an editor and have people helping me in the background, it would feel more like a job, and I feel like it wouldn’t be fun for me anymore.

Tubefilter: What do you think draws people to your videos? Have your viewers/commenters ever said what makes your videos so intriguing for them?

AN: I feel like the style of my videos is what draws people’s attention. I was talking to one of my friends recently and he said that my videos almost are hypnotizing, and I feel like it’s because of the point-of-view style I do, and the voiceovers, and what I’m actually doing in the video. It intrigues people.

So, for example, I can be doing something completely random inside my truck, like maybe cleaning or brushing my teeth, but the voiceover will be a storytime about a scary experience I had while truck driving. So I feel like that kind of gives people more things to focus on, because they’re like, “So why is he doing this but talking about that?”

Tubefilter: Has anything changed for you personally and/or professionally since you started your YouTube channel?

AN: My whole life has started to change since I started my YouTube channel, not only financially, but when I go out I get people who notice me a lot more. I’ve had a lot more opportunities with bigger brands, and everything in general has just completely changed for me since I started doing YouTube. It’s truly a blessing.

Tubefilter: You upload lots of content to YouTube Shorts. Has Shorts played a significant role in growing your channel? Do you think you’d be able to make as many videos as you do without Shorts?

AN: YouTube Shorts took a huge role on my channel growing instantly–and fast, at that. I went from 30,000 subscribers to almost 300,000 subscribers in less than three months. I feel like Shorts is perfect because a lot of people’s attention span is within a minute, and Shorts help out with that perfectly. If you’re making good content, people will subscribe because they want to see more of you. I definitely wouldn’t have as much content if it wasn’t for Shorts.

Tubefilter: How do you see YouTube fitting into your life from here on out? Do you plan to keep being a truck driver? Do you ever want to try making other kinds of content?

AN: YouTube has been dream of mine since 2016, so it will definitely stay in my life. I enjoy making content. I do plan on being a truck driver. This is my career and I get to share it with the world, and it makes it that much more fun. I would love to make different kinds of content in the future, but for now I’m gonna stick to truck driving videos because that’s what a majority of my followers are coming for.

Eventually I would love to do something like how FaZe Rug does. He went from making Call of Duty gameplay videos to the kind of videos he does now, and still has his fanbase behind him regardless of if he doesn’t play video games in his videos. I actually look up to him and I WILL make a video with him one day. Mark my words, lol.

Tubefilter: Do you have any plans or goals for yourself and your channel? Any cool projects you can mention?

AN: I have a lot of personal goals for this channel that I want to keep to myself just so I don’t spoil them. I’m really superstitious and I feel like saying my goals out loud can ruin them. A cool project that is in the works, is me driving an electric semi truck for the whole day and loading up in it and seeing what it’s like to drive an electric semi truck with 80,000 pounds behind you.