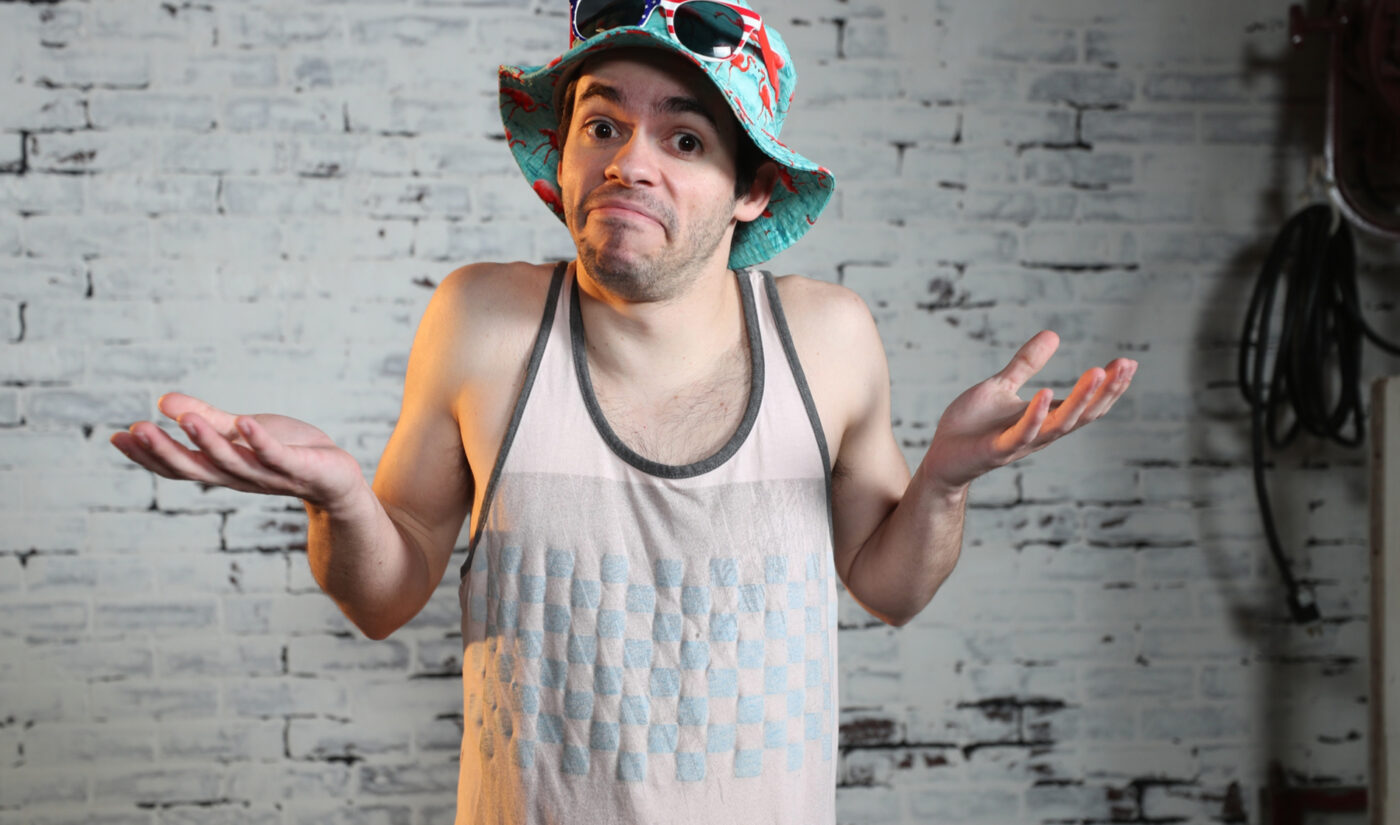 Yes, we know there are many Florida men, and many, many wild headlines to go with them.

But, at least on YouTube, Ben Brainard is the Florida man.

Brainard, who’s 26 and from Daytona Beach, describes himself as the kind of person who’ll try anything once. And he’s tried a lot. After high school, he got into a mechanical engineering program at an aeronautical university, only to “get bored of calculus,” drop out, and join the U.S. Army Reserve. Enlisting had him move to Orlando, and once there, he put his longtime love of comedy to work and broke into standup.

By 2020, he was doing open mic nights and shows every single night, and was starting to expand beyond his home state. Just as he decided to make standup a full-time pursuit and booked six shows back-to-back in Georgia, COVID lockdowns kicked in. He got the call while driving to the first venue: all six shows were cancelled.

That hit hard, but Brainard didn’t give himself much time to wallow. He wanted to keep his standup sharp. So, to do that, he challenged himself to write and post a comedy sketch every day of quarantine.

Of course, that was when he (and most everyone else) thought lockdowns would be a one-and-done, two-week event. When it became apparent things were going to stretch on longer, Brainard set a new goal–producing two sketches each week. He posted those to TikTok, then to Instagram, and finally to YouTube.

At the same time, he was resuming IRL shows, and while he knew his digital stuff was doing well, what proved it was the effect his online presence had on physical ticket sales. As a last-minute headliner at The Orlando Improv, he was able to sell around 150 tickets in five days–no small feat, and a sign that making videos had become an inextricable part of his comedy career. 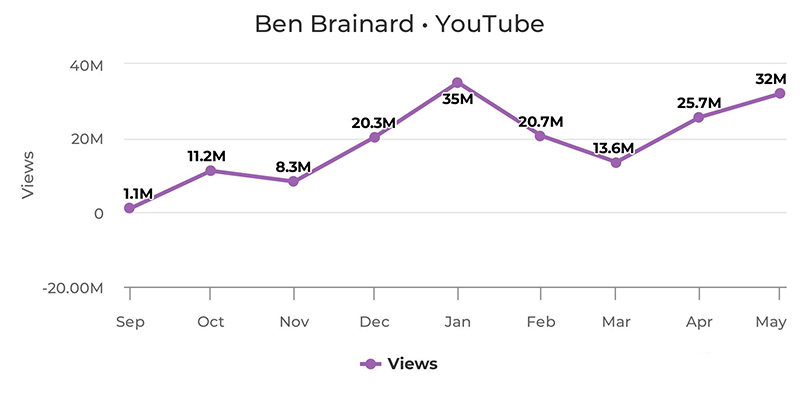 These days, Brainard has more than 1.6 million followers on TikTok and more than 480,000 subscribers on YouTube. His monthly views have gone from one million in September 2021 to an all-time peak of 35 million in January 2022. In the last three months, his channel has netted more than 70 million views.

Tubefilter: Let’s start from the top. If somebody’s reading this and they’ve never heard of you, never seen one of your videos, tell me a little bit about you. Where are you from? How did you get started on YouTube?

Ben Brainard: Hi, my name is Ben. I’d been doing comedy for many years before I even started with content creation. If you have seen my videos, you probably see me as what a lot of people call “the States guy.” I dress up as the states of America, sit down at a table, and talk about how how nobody’s doing well.

So before I got started with content creation, I was doing standup comedy, and at the start of the pandemic, I had two weeks’ worth of shows get flat-out canceled while I was driving through the middle of nowhere, Georgia. Mm. So I stopped at a cookout, I ate my feelings, and then I drove home, and home at the time was Orlando, Florida. So about six-hour drive from Atlanta, where I was.

And I decided at that moment, I wanted to keep the comedy muscle working. I wanted to write a sketch every single day for the entirety of quarantine—because, at the time, I thought it was just gonna be like a 14-day thing. That when we all still had hope.

So I started doing like a full one-minute sketch every single day, which is a lot. At the time I was just kind of putting out anything I saw I could make funny. Whatever idea I had, I would just turn into a 60-second sketch and I’d post it. It was just TikTok at first, but as soon as they started picking up a little bit on TikTok, I started posting to Instagram Reels and Facebook. Or I guess Instagram didn’t have Reels at that time, so I was just posting to Instagram and just to regular Facebook, and then regular YouTube.

And within six months on TikTok, I had gained a million followers and gotten verified. And at that point I was like, I guess I’m just gonna do this for the rest of my life now.

Tubefilter: So million was the magic number.

Tubefilter: So what sold you on that? Just instantly?

And I think I was easy to sell on it because it was pretty much in line with what I had already wanted to do with comedy, and I knew I could transition easily from that into something that was more standup-related. I had decided actually go to go full-time standup in January of 2020, like a month before the world shut down.

And I had every weekend booked from January until October of 2020.

BB: Yeah. But at the time I was broken. I was just like, I can’t just do Uber, man. I can’t do this. So as soon as something I enjoyed started picking up, I was like, this is it. This is my way out.

Tubefilter: Are you still planning to go back to standup, or are you just full-throttle content?

BB: Oh, I never really stopped doing standup. It was just the time I was in Florida. So we had like a three-hour lockdown. That’s about it. And on day 10 of the pandemic, Florida made the WWE essential. So at that moment I was like, we’re gonna be fine.

Not like fine in like the traditional sense, but I mean, as a comedian, I was like, comedy’s not going anywhere in Florida. So I just waited a couple of weeks until stuff started happening again. And I was going out to open mic every other night or whatever it was before the pandemic. I was going out every single night to at least one open mic or a show, working.

And then after a couple weeks of the pandemic, there’s a couple things that popped up here or there. It was mostly just like weird bar shows, and I would mostly just sit in the back away from everybody, walk up, do my five minutes, and then leave immediately, because that’s the only safe way to do anything in Florida, much less during a pandemic.

BB: Yeah, so comedy never really stopped. After that first six months, I think when I hit that first like big milestone of just, “I think this is a viable option,” I started looking for different ways to turn the online success into ticket sales.

My first gig was at Margaritaville in Kissimmee, Florida, which is just Jimmy Buffet’s retirement community. None of this is a joke, by the way. I was featuring for my buddy Carmen Vallone, and I think we had sold out both shows that weekend. I don’t want to disparage Carmen at all, but I’m pretty sure most of that was because they knew who I was.

And it was working! I got a last-minute headline at The Orlando Improv, which is my home club, and it’s kind of like the club where all the big names come through, just like every big name in comedy that comes through Orlando performs at The Orlando Improv. When I was asked like five days in advance, I heard from Krista, who’s the GM, she was like, “Hey, we had a headliner cancel this Friday.” She was asking me this on Monday, like, “Are you available this Friday?”

And, like. Help. But I was like, sure, I’m not gonna say no to this opportunity. So within like five days or however much time it was, I think I had sold like 120 to 150 tickets.

So at that point it was like, “Oh, okay, the online stuff is viable to just keep me alive and pay bills.”

But now it’s become this thing where I can bring people out. I can put butts in seats. This is absolutely viable for standup comedy. And from there, I was able to get in with the rest of the Funny Bone chain. I flew up to Ohio to do their four clubs up there—Toledo, Columbus, Cincinnati, and Dayton. Those went very well as well. So that kind of opened it up to all of the rest of the clubs that chain owns, and I was able to use that to get into all of these other clubs.

Tubefilter: So you’ve been busy.

BB: Yeah, I have been working nonstop on standup. I actually literally just got back a couple of days ago. I did six shows in four days—Fort Wayne, Appleton, Wisconsin, Louisville, Kentucky. And I just got back yesterday, from that.

Tubefilter: And you say “Louisville” correctly.

Tubefilter: Yeah, you get in trouble if you say it wrong up there.

BB: Oh, absolutely. I heard somebody in the Louisville airport say “Loo-ee-ville,” and I almost told them to get back in the plane and leave. And I’m not even from Kentucky! I have no horse in this race.

Tubefilter: But once you learn, it becomes a thing, right?

BB: I became one of them. I learned how to say Louisville correctly. And then I got to see Churchill Downs. I was like, “I now technically have a horse in this race.”

But yeah, to wrap up the question on online content creation, trying to put out two full, six-minute sketches every single week, while also going on the road and doing standup regularly, is, uh…

BB: Yeah. I have always posted my stuff to YouTube, and as soon as YouTube Shorts became a thing, I think it was like at this weird time where I was posting full videos on YouTube and I was kind of ignoring YouTube Shorts, because I was making these full things and YouTube had a platform where I could post like a three-minute video. So that’s what I was doing, and I was making more money doing that than I was in the TikTok Creator Fund.

But then I had a friend who was like, “Hey, why are you being stupid? Post your stuff to Shorts!”

So I was like, “Oh, okay. I’ll do that.” So I changed up how I write my sketches completely. I went from like three-minute sketches to—well, I still have three minute sketches—but I write three, one-minute-long sketches that fit together when you watch them in a row, but can also be seen standalone.

Now I post the full sketch to YouTube, the full three to four minutes or however long it is, and then I break it down into three or four sub-one-minute sketches that are standalone that I then post the YouTube Shorts as the week goes on as well. And the ROI on Shorts in insane, just on a strictly follower basis.

Tubefilter: I was gonna say, I know you’re not talking about money.

BB: No, absolutely not. I mean ROI as in I’m getting a lot of followers, but because I’m still posting the full sketches to YouTube, I have the instream ads. Then the more followers I get from YouTube Shorts, the more people I get to watch my long-form videos. So the ROI is still there in financial terms as well.