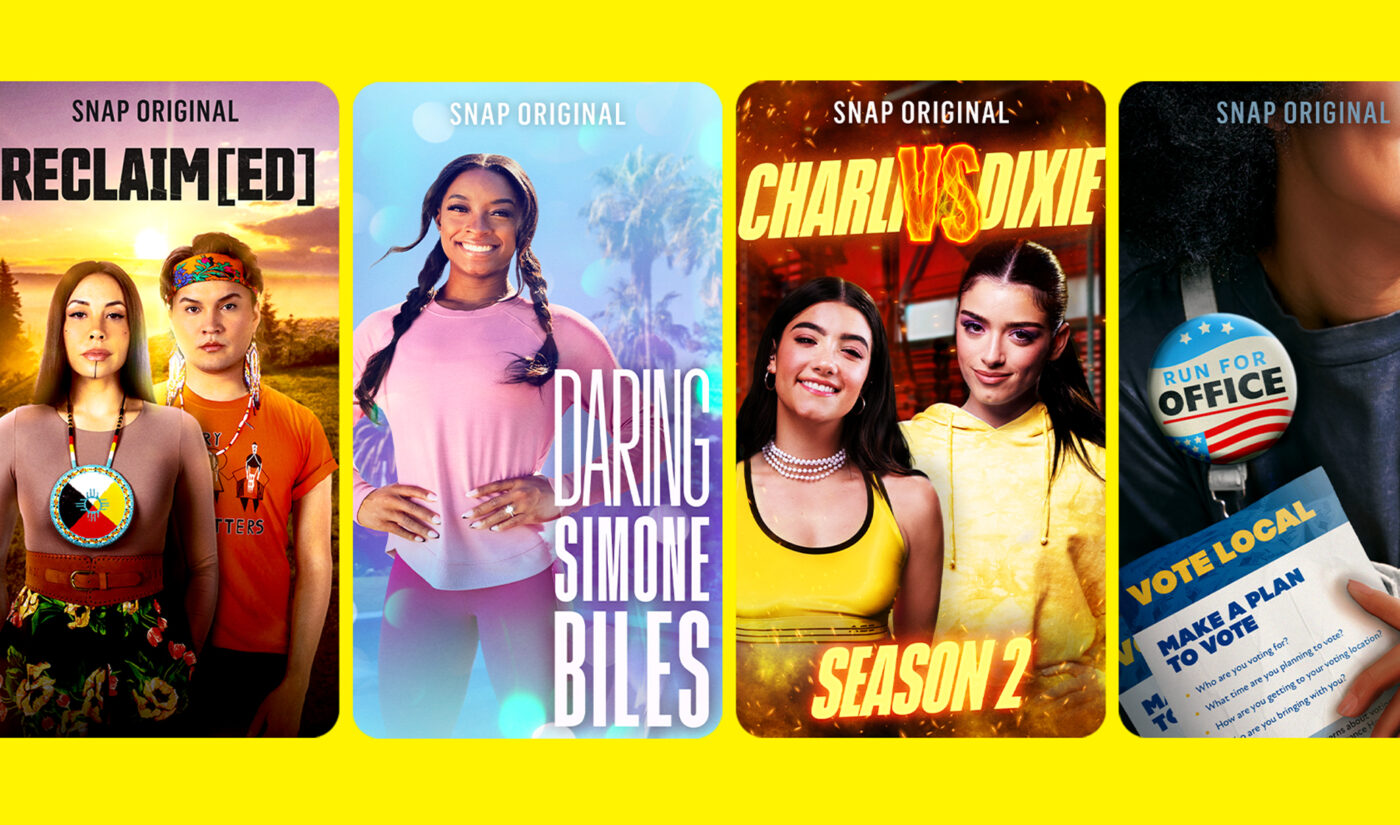 Snap’s got a lot going on.

What are those users doing on Snapchat? Well, as has been the case for years, a lot of them are watching the platform’s original programming. Snapchat has more than 150 original series, and says that in the fourth quarter of 2021, more than 80% of the U.S. Gen Z population watched at least one of those shows.

Some are also tuning in for Snapchat’s augmented reality push: It says more than 10 million users watched Breakwater, a series from Snapchat and Verizon that used AR Lenses to give viewers an up close and personal look at a dystopian landscape wrecked by climate change. Its overall library of AR Lenses see 6 million views a day.

Another big crowd-drawer was, probably unsurprisingly, Charli Vs. Dixie, the D’Amelios’ unscripted challenge series. Over 20 million users tuned in for season one, Snapchat says.

Simone Biles’ series will see her tackle new challenges and careers, like beekeeping and DJing

Charli Vs. Dixie is, probably also unsurprisingly, one of the original series Snapchat has renewed for a second season, along with The Me and You Show, which Snapchat pitches as using its homegrown tech to “turn you into the lead actor in funny scenes with your best friends on Snapchat, from dating and relationships to school and the holidays.” Fifty million users watched season one of that series, it says.

Here are all of Snap’s new content announcements (with descriptions provided by the company):

The folks making these series and future Snap Originals are asked to take part in Snapchat’s new Equity Partnership Pledge, it announced today.

Per a representative, the pledge wants “partners to commit to supporting Snap in a variety of inclusivity initiatives including diverse staffing both on and off camera and organic partnerships with advocacy groups to assure that Snap Originals are reflective of our community’s diverse voices.”

Last but not least, Snap has sealed a partnership with Cameo.

Cameo-ers will make custom short-form video ads for marketers that are specifically formatted to run on Snapchat.

Snap says this program adds on to its Creator Marketplace, which debuted this time last year and is similar to the Cameo program, except hooks brands up with Snapchat creators instead of Cameo talent.

Snap describes the partnership with Cameo as a “first of its kind” for both companies.