There’s a nifty perk for some Karat cardholders: Their faces on billboards. 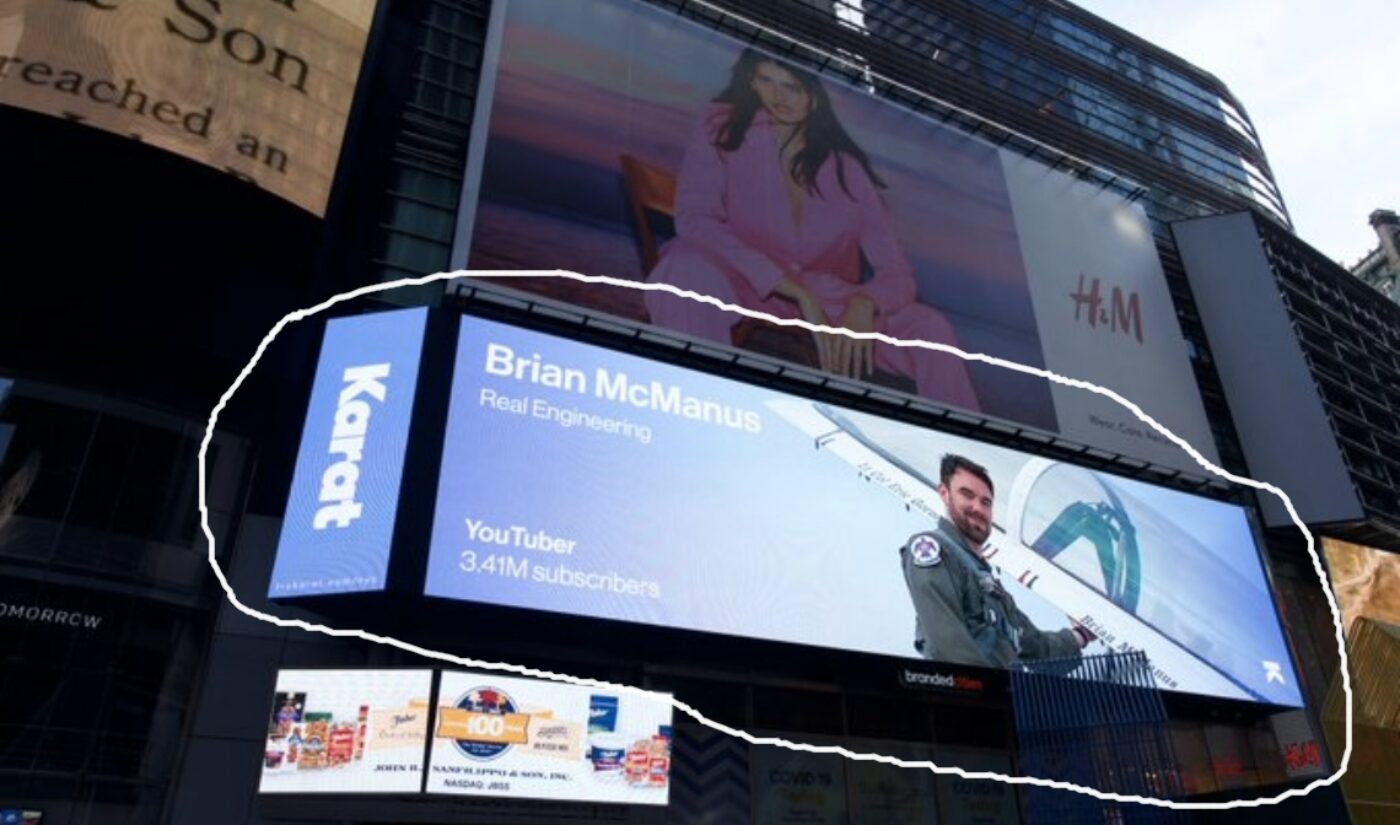 Karat Financial is known for introducing a credit card designed for the creator economy. When it came out of stealth in 2020, the fintech company proposed that its card would help out influencers whose uneven expenses can make traditional banks suspicious.

Like any other credit card company, Karat offers additional perks to its members. If you want to see what Karat is doing on behalf of its partners, head to Times Square before March 20. Or, if you’re not local to New York, you can just take a look at the image above.

The billboard you see up there advertises Real Engineering, a popular science YouTube channel operated by Irish creator Brian McManus. McManus is one of 34 Karat partners featured on billboards in the heart of Midtown Manhattan. In total, the two-year-old company has run three billboard campaigns since the start of February — two in New York and one in L.A.’s West Hollywood neighborhood, next to the TCL Chinese Theatres — and has featured more than 80 different creators across all three waves. And as McManus noted, these services have been rendered to cardholders free of charge.

Can’t get the local newspaper in Galway to do an article about the channel, but I can get a billboard in Times Square for free. Thanks Karat! pic.twitter.com/GQNCgj2WzB

“The billboards are just one of the perks we provide cardholders,” Karat co-founder Will Kim told Tubefilter. “There’s a reason some of the biggest creators in the world continue to use Karat: we respect them as the businesses they are and we’re obsessed with providing the highest level of service as their partners.”

Since these campaigns began, most of the featured faces have taken the time to snap pictures next to the billboards that promote them. Karat told Tubefilter that 70% of the participating creators have shared their billboards on Instagram. YouTube gaming star Ludwig struck a pose, while the always-stylish Tiffany Ma opted for an entire photoshoot.

Perhaps these creators look so happy because they’re excited about the marketing potential of these billboards. Jack Neel, a short-form video star who was included in the most recent Times Square campaign, saw his billboard as a chance “to be showcased in a way that’s bigger than a 60-second TikTok video.”

This was the same sort of phenomenon that occurred when YouTube put some of its top stars on billboards beginning in 2014. People who didn’t know a thing about the online video community were suddenly exposed to it. “Any creator can benefit [from a billboard] as every person that walks by it is a potential fan who hasn’t discovered their content yet,” said vlogger Carter Sharer, who was part of the West Hollywood campaign. “Being in a popular area like Hollywood means more eyes, more potential fans who haven’t discovered the content yet.”

“Being featured on a billboard is like a celebration of hard work.”

That’s how Sharer felt about seeing his face up next to the TCL Chinese Theatre marquee. One look, and he knew he’d “made it.”

Sure, getting your face on a billboard is good for your business. But the perk also has intrinsic value, especially for creators who have busted their butts to get where they are today. The billboards serve as proof that the people on them have achieved a significant level of success and accomplishment. YouTube often tapped creators with inspiring origin stories when launching its IRL ads. Karat has a similar goal, with co-founder Eric Wei calling the billboards “a fitting way to celebrate the breadth and diversity of this new economy.

Russian-born Marina Mogilko, who uses the Karat card for her business LinguaTrip, saw her billboard as a sign that “great things happen,” even for immigrants like her. “Being on a billboard in Times Square has always been a dream!” Mogilko told Tubefilter. “As a kid I thought this was a sign that ‘you made it’ in life.”

“Something about that kind of recognition is really fulfilling,” Neel added. He described the joy of “knowing that your efforts and grit are finally being recognized.”

The Karat partners we talked to were unanimous in their assertion that anyone in their line of work could benefit from a billboard. Mogilko asserted that this opportunity could be a “career highlight” for any creator. Plus, as Neel noted, posing for a photoshoot is just plain fun. His overall review: “10/10 coolest thing I’ve done this year!”

Karat has been supported by multiple rounds of VC funding. Most notably, the company raised $26 million in 2021, including an $11 million Series A. Many of the creators who carry the Karat card, including Sharer and chess prodigy Alexandra Botez, participated in that investment.