Creators On The Rise: AndreaXAndrea was a slime YouTuber. Now? She’s the CEO of her own slime boutique. 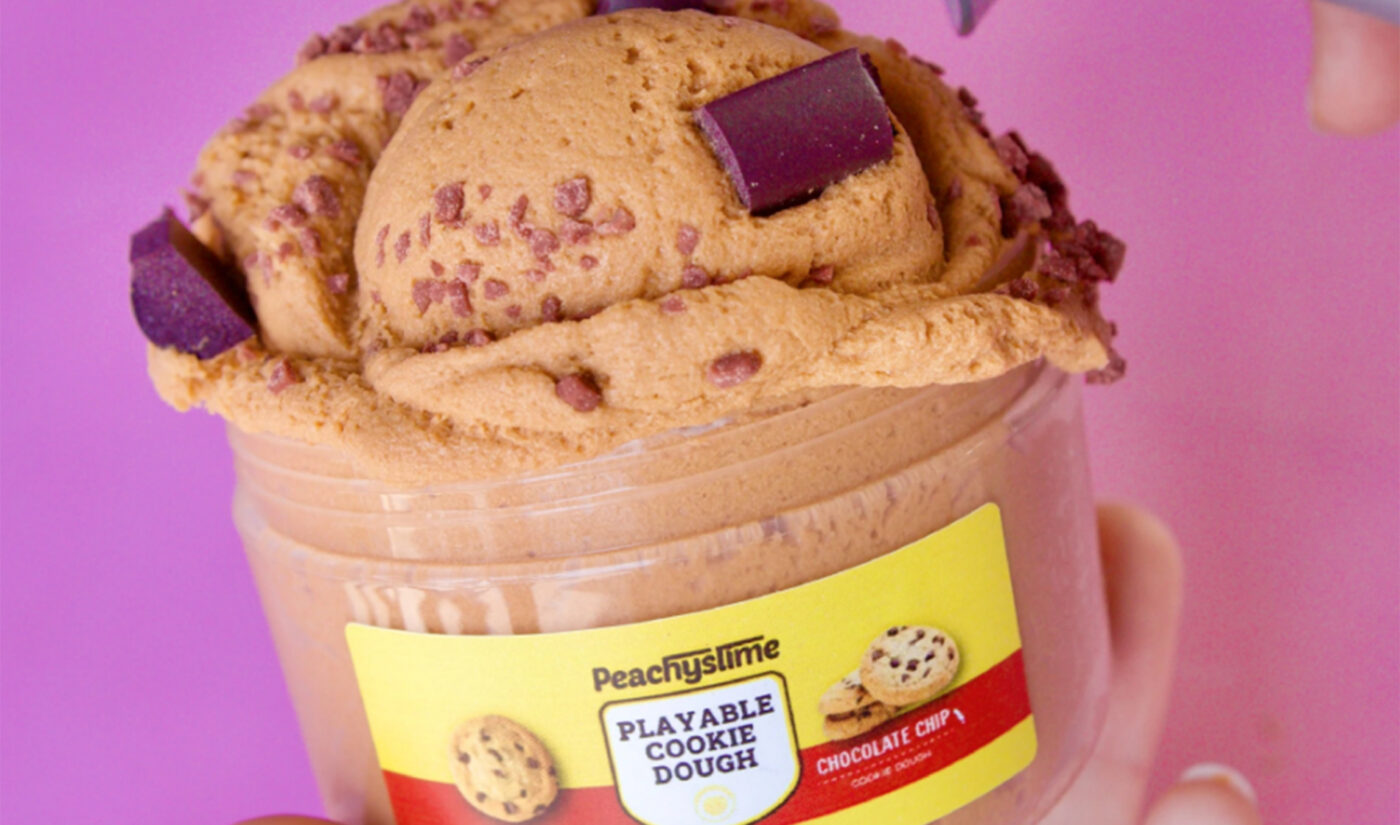 Back in 2016, she was one of thousands of creators making videos about the year’s biggest craze: slime. She uploaded about 100 videos, 37 of which have one million views to date, and attracted a nothing-to-sneeze-at audience of around 800,000 subscribers.

If you were in the YouTube-o-sphere that year, you know that plenty of YouTubers who made names for themselves as slime DIYers, testers, and enjoyers parlayed their YouTube popularity into partnerships with companies like Craft City to release branded slimes into big box stores like Walmart and Target.

Six months after her YouTube channel began to take off, she founded her own slime-making company.

For anybody thinking Wait, isn’t everyone kind of over slime?, we point you to the sheer volume of product Peachybbies moves. Andrea’s company sells more than 40 varities of slime, and restocks their store each Friday. Every single time they restock, they try to put between 100 and 300 individual packs of each slime variety up for sale.

Customers who are quick enough snag slimes like Pink Lemonade Italian Ice, a bright yellow-and-pink slime that smells like Country Time pink lemonade and has lemon charms and (non-edible) sprinkles mixed in. Or there’s Butterfly Pea Flower Crunch, a “snow fizz” textured slime that smells like fruit tea and comes with a packet of flower and leaf charms to mix in. Or Rainbow Cubes, a jelly slime that comes with squishy jelly cubes, rainbow sprinkles, and myriad charms, and smells like vanilla.

So yes, you may not see quite so many mass-produced slime kits on store shelves these days, but Peachybbies has proved it’s got staying power.

And, thanks to a recent boom in YouTube viewership, Andrea’s company is actively growing. 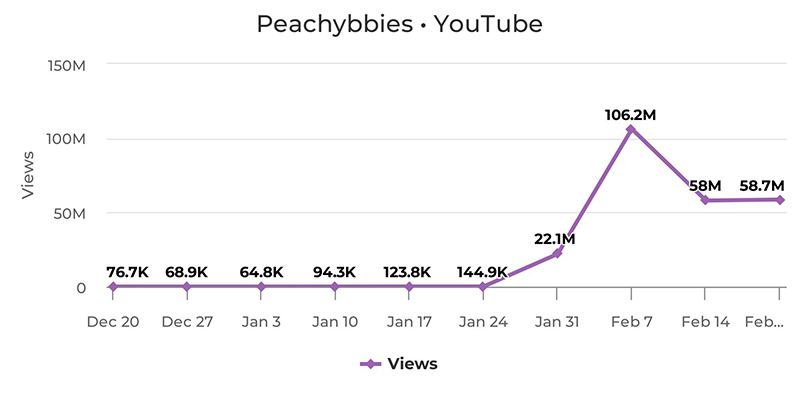 Social media has always been the core of Peachybbies’ marketing strategy. It’s never paid for ads, Andrea says. Instead, the brand caught its early updraft with her own YouTube audience, tapped other slime-making creators for word of mouth, and launched accounts on both TikTok and YouTube giving viewers behind-the-scenes looks at Peachybbies’ slime-making and staff.

Then, in February, Peachybbies’ channel shot to 100 million views. Andrea has no idea what prompted the spike–but she and her team are taking it as a sign to cement tentative expansion plans, increase their production resources to up the amount of slime they can produce each week, and to pursue potential deals that could put Peachybbies slimes in retail stores.

Tubefilter: We’ll dive into Peachybbies in just a second, but before we do, tell us a little about you! You were a YouTuber before you launched your company. What made you want to start a YouTube channel? What drew you to creating videos?

Andrea: Yes I was! Well, kind of. It was more of a dream of mine than an actual career at that point. I started off on AndreaXAndrea doing fashion and lifestyle vlogs. During 2016, slime became a huge national trend. I made one video about it that blew up to over a million views, and before you know it, that became my brand. After six months or so, I created Peachybbies as the brand to sell slimes under while still posting slime challenge videos on my other channel.

Tubefilter: Lots of other slime YouTubers ended up partnering with manufacturers to release their own branded slimes, but you went all the way and started an actual company, hand-making your own products. That’s a huge commitment. How did you decide starting a company was right for you? What were the challenges of launching Peachybbies?

Andrea: Handmade slime is a totally different product than the mass-produced ones that you can find in big box retail stores. I really wanted to provide my customers with a higher-quality experience. We’re actually considering going the mass-produced route to offer a different line of products in places like Target and Walmart, but handmade slimes sold online will always be the core of our business.

The biggest challenge is trying to wear a bunch of different hats. Produce the content, make the artwork, handle customer service, innovate new slimes each week, etcetera. Thankfully I have help for a lot of this nowadays, but at first you have to figure it out alone.

Tubefilter: What role have YouTube, TikTok, and other social media played in marketing Peachybbies?

Andrea: My business would not exist if it wasn’t for social media marketing. We haven’t spent a penny on paid ads, which is very unusual in the ecommerce world. It’s not that we’re against it, but for now we’d rather spend our money on expanding our content creation!

Tubefilter: What do you have to say to folks who might roll their eyes at a company based entirely on slimes? Why does Peachybbies have staying power?

Andrea: Haha, all I have to say is don’t underestimate any industry! For example, people had the same reaction to the Snuggie, and yet it ended up selling over 30 million units. Slime is an amazing sensory toy for things like stress and anxiety. I personally use it to help ground myself when I start to panic. We’re here to stay because we don’t get complacent—we’re constantly innovating, creating, and striving to do better. One thing I’ve learned on social media is that you need to learn how to adapt!

Tubefilter: Your YouTube channel has recently seen a big boost in number of views and subscribers. Do you know if there was one specific video that took off, or did numbers go up across a bunch of videos simultaneously?

Andrea: Great question! It wasn’t any specific video, the algorithm all of a sudden decided we were worth viewing, lol. We were uploading two videos a day for like two months straight and they were only getting a few thousand views each. Then BOOM, everything started getting 500,000+ views, and ever since it’s stayed that way.

Tubefilter: Has this surge in engagement changed anything for Peachybbies? Are you focusing more on producing Shorts, have you brought in any new team members…?

Andrea: For sure! We were already looking at expanding the business, but now we’re way more confident in doing so. During our Friday launches, the store sells out in maybe two minutes. While it’s great that business is going well, it’s become so difficult to buy our products that tons of customers are growing frustrated. We’re trying to expand as fast as possible! And yes, we’ve been aiming to bring on more social media creators as well.

Tubefilter: How heavy is Peachybbies’ focus on making content compared to making slimes? Like, this might be hard to quantify, but is there a rough percentage of time spent making products versus making videos?

Andrea: It’s a bit of a cliche, but I’d have to say 50/50. If we have nothing to sell, then what’s the point of making content…but if we don’t have content to promote us, then eventually we won’t be able to sell any slime!

Luckily, I have an awesome team who helps make the products, so personally I try to devote more time into making content, but I always make sure to make new slime ideas and prototypes each week still.

Tubefilter: What has the overall rise of short-form content done for your business? Do you think you would be making videos so regularly if it weren’t for TikTok and YouTube Shorts?

Andrea: It’s been a complete game-changer. My career started off as a YouTuber making 10+ minute-long ASMR videos. It was big for a while, but eventually people got bored of that style of content. TikTok and Shorts created an entirely new wave for the slime community.

Tubefilter: Do you have any plans for Peachybbies that you can share with us? Anything exciting coming up in the next few months?

Andrea: Well, I am definitely looking at my career differently now. It’s really heaven to be able to produce videos that I personally want to produce, and have an audience out there that enjoys and supports the content I enjoy producing.