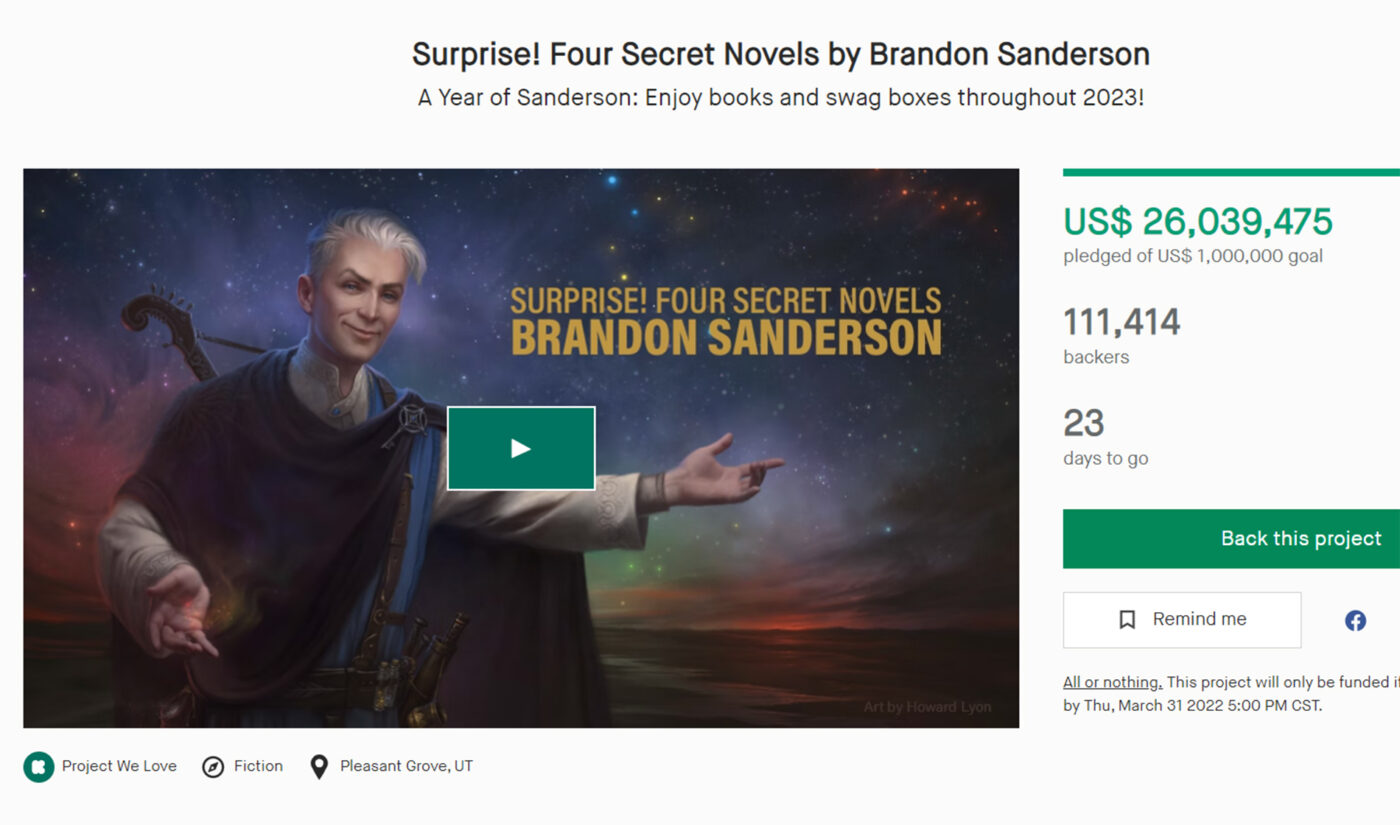 “Everyone, I’m supposed to WRITE fantasy worlds—not live in them.”

That’s the first line of author Brandon Sanderson’s latest update to backers on Kickstarter, where his project to release his next four novels just crossed a whopping $25 million in pledges.

For those unfamiliar with Sanderson, he’s the author of numerous iconic fantasy series, including Mistborn and the Cosmere universe. He was also chosen to wrap up Robert Jordan’s bestselling series The Wheel of Time.

His Kickstarter project includes three standalone books set in the Cosmere universe, and one standalone book in a different setting. All four books were previously unannounced, and are being released through Sanderson’s own company, Dragonsteel Entertainment, instead of through his longtime publisher Tor.

Backers can pledge to receive digital, physical, and audio copies of the books, plus themed swag boxes.

Sanderson’s 30-day campaign originally sought just $1 million—a figure it raised in under 35 minutes, according to Kickstarter.

In its first 24 hours on the platform, Sanderson’s campaign raised >$15 million from more than 22,000 individual backers. These are both record-setting accomplishments, Kickstarter tells Tubefilter.

The campaign also set a new record for most amount raised by any project in a single day. It more than doubled the previous record-holder’s amount.

At press time, the project has raised $26 million from 111,000+ backers, and is officially the most-funded Kickstarter of all time, having surpassed the $20.3 million raised in 2015 by now-discontinued smartwatch brand Pebble.

“When I started writing Secret Project #1 two years ago, I had no idea what this would become,” Sanderson wrote in his update. “Back then it was just a chance to do something different, to search out a new kind of voice for my writing and give something special to my wife. Yet I can’t help but think that something huge has just changed. Not just for me, but for publishing as a whole.”

The sheer size of the trove raised by Sanderson’s project has stirred some discontent among other writers, as Slate chronicled here. But it’s tough to find flaws in a project that’s essentially just a preorder campaign for four self-published books.