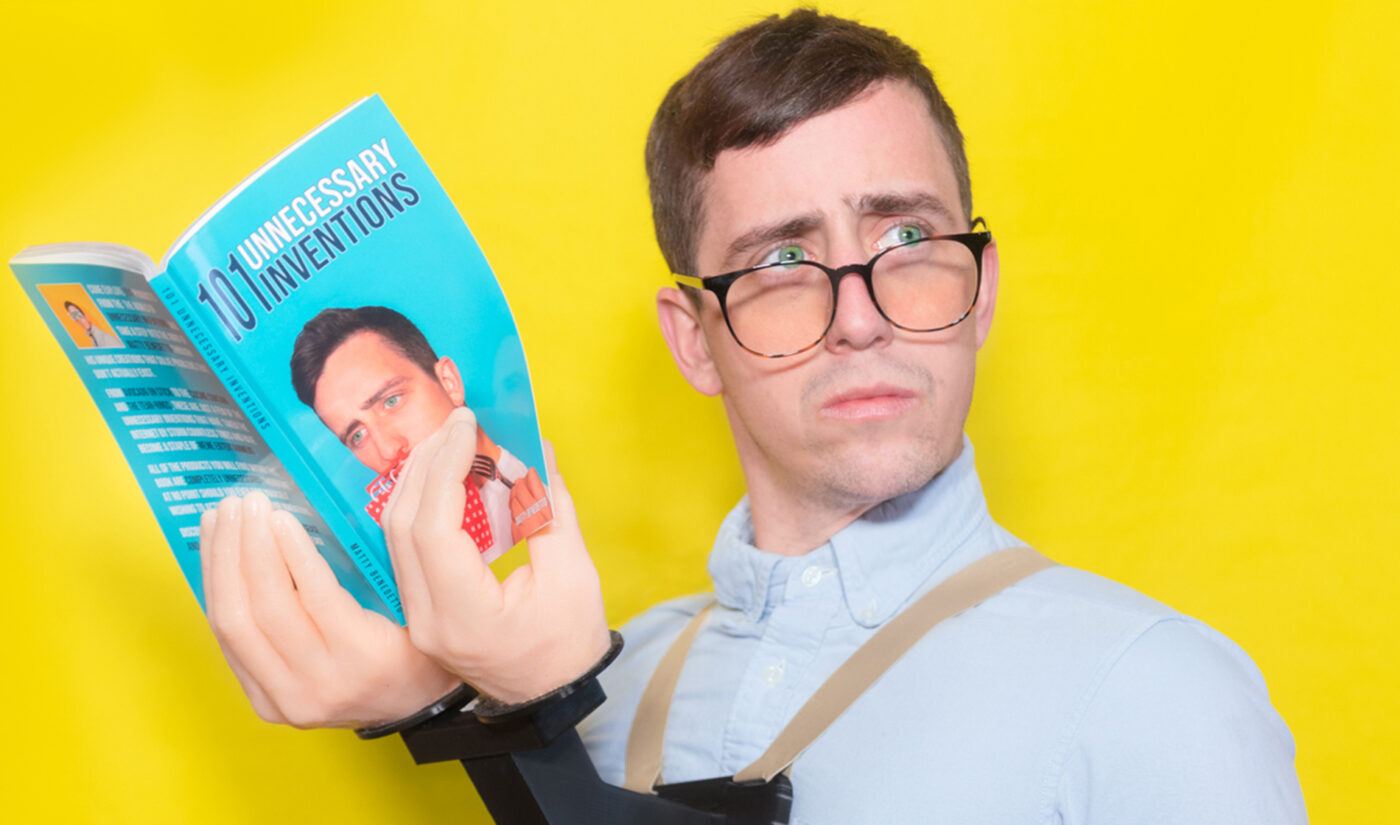 If you read our other weekly column, Creators on the Rise, you probably know Matty Benedetto. We featured him back in October, after his YouTube channel took off and shot from around one million views per month in early 2021 to tens of millions each month.

But for those who didn’t see our previous spotlight, here’s the rundown: Benedetto makes things that no one needs, and that (most of the time, at least) do not and will not ever exist.

His channel Unnecessary Inventions is a trove of absolute ridiculousness. Does anyone need a keyboard that can only type your passwords? No, of course not, but Benedetto made one, and his video about it has 46 million views. Is it absolutely required to have a tube that somewhat unreliably shoots outside air into your car as you’re driving? Nope. What about a device to stop your Tic-Tacs from rattling? A fidget-spinning backpack? An anti-soggy-cereal bowl? Earrings that dispense thimble-sized squares of tissue for people to mop up their tiny violin-sized tears?

None of these are strictly needed–and that’s what makes them so fun for Benedetto to design. As ridiculous as his fake products are, his background in production and manufacturing is very much real, and these days he’s got a full-fledged studio stocked with 3-D printers, embroidery machines, a laser cutter, a rug-tufting setup, and pretty much everything else he could ever need to take any hairbrained idea from mere concept to working model.

Since we talked to him in October, Benedetto has taken his channel from around 700,000 subscribers to more than one million. And he’s starting to lay plans for his company to produce more real-world products (often in partnership with other brands) and possibly even find a way for people to visit and see up close how Benedetto makes his unnecessary inventions.

Tubefilter: When we talked to you in October, you had a little over 700,000 subscribers. Now you’re at more than a million! How did it feel to hit one million subs?

Matty Benedetto: It really felt great! I wanted to try and slide it in before the end of 2021 but just missed it by a day or two. However, there really is something special about hitting 1M on YouTube–maybe it has to do with the milestone plaques that they send. It just really gives you a sense that you’re really making it on the platform and they care at the same time.

MB: At Unnecessary Inventions, each week I design and build fake consumer products to solve problems that don’t really exist. I have a full design studio to help me take an idea in my head to a real finished product in about one to four days, week in and week out. I document the whole design process from behind the scenes with DIY build videos, vlogs, and commercials for the products I create.

When I first started Unnecessary Inventions in March 2019, all of the content was photo based over on Instagram. As my following grew over there, more and more people wanted a deeper look into how I actually built the inventions as well as videos demonstrating a little further how they worked. So YouTube was the perfect extension to give my audience that extra look into the unnecessary world.

Then, only about six months later, in September 2019, I decided to go full-time working on Unnecessary Inventions, as I began getting brand partnerships to build new inventions and incorporate the specific brand into the design of the product. Those first couple campaigns were for Bud Light and Call of Duty. Since then, I’ve worked with a number of brands, like Old Spice, Captain Morgan, DoorDash, Canon, KFC, Shopify, and more!

Tubefilter: Unnecessary Inventions is also a company, and you actually sell a bunch of products—some apparel and some, like the BaguettePack, perhaps just a tad bit unnecessary. What was the process for starting an actual consumer product line? Do you plan to keep making more products?

MB: Over the past 15 years prior to Unnecessary Inventions, I started and built three different ecommerce brands where I mass-manufactured dozens of real “necessary” products that I designed. From clothing, luggage, tech accessories, and more–I had a pretty diverse background in bringing products to market.

Out of the 300+ inventions I’ve designed under Unnecessary Inventions, around 15 or so have been available for purchase. So with my previous background, bringing those inventions to life was just second nature to me at that point. Majority of the things that are actually available for sale are mass produced overseas and imported to my design studio in Vermont.

I have a few products launching soon that all fall within the Unnecessary Inventions world but might not exactly be my exact inventions. I think part of the success of the brand revolves around the fact that they aren’t for sale because it’s the opposite of what you’d expect me to do. Someone comes to my channel and after watching a few videos, “Wait what, none of these are for sale?!” So they take a deeper dive to find out more.

The majority of the business side of Unnecessary Inventions relies heavily on the brand partnerships.

Tubefilter: What’s changed for you overall in the last six months or so? Has your increased traffic and growing subscriber base paved the way for anything cool or helped expand the Unnecessary Inventions team?

MB: Over the past six months, I continued to pump out some great inventions that were really well received. A few of them got the attention of Captain Morgan and I worked with them for about two to three months planning a fun campaign around the Super Bowl. I got to be featured in their Super Bowl commercial for the Super Bowl Punch Bowl–and even got to launch the campaign by going on Jimmy Kimmel Live! in January. So it was really awesome to break into a little bit more of the mainstream media world with that project.

Tubefilter: We asked last time about the effect YouTube Shorts has had on your channel. Any updates there? What’s your experience been producing short-form content versus long-form content?

MB: I am still heavily focused on YouTube Shorts, and I have absolutely seen a consistent increase in numbers across the board. Short works really well for me because I am able to focus on getting new ideas out there much faster. On top of not selling the inventions, I think another aspect that has led to my success is the frequency in which I am able to get new inventions published. Long-form content can slow the process down–however, it also gives you more time to show the audience your personality and connect with them. It’s definitely a balancing act that I am still trying to perfect.

Tubefilter: You mentioned your studio setup last time, but we didn’t get too in-depth with it. We’d like to ask more this time! How many 3-D printers do you have? What else is stocked in the studio?

MB: I have been in my current studio for just about one year now, and it really has become my dream space. It’s 2,400 square feet and has every tool and gadget I could ever hope for. In total, I have about 19 3-D printers in the studio. It’s been really helpful to be able to both work on my own personal inventions for content as well as working behind the scenes on branded partnership projects all at the same time with the number of printers here.

However, on top of that, I also have a Glowforge laser cutter for cutting out wood and acrylic, a few sewing and embroidery machines, two CNC mills, a direct-to-garment printer, a rug tufting setup for making custom rugs, power tools, and of course all of the filming equipment I need to produce my content. So as I mentioned earlier–basically everything I could possibly need to take one of the ridiculous ideas in my head and bring it to life!

Tubefilter: What are your goals for this year, as a creator and a business owner?

MB: I’ve said this time after time, but I’d just really love to bring Unnecessary Inventions into the real world for people to experience. It’s really hard to know when the global pandemic will finally ease up to allow it to happen, but I’d love to create an in-person experience where people can see a full 360 of the unnecessary world. I think a lot of people have never seen how a 3-D printer works–so a section on the technology behind the inventions, an area to see some of my inventions on display, and even and area to get a look into the content creation side of things as well.

Then on top of that, I hope to get the chance to work on some bigger branded campaigns like the Captain Morgan Super Bowl project. Fingers crossed!

MB: I would have to say my favorite part about being a YouTuber is that I have the freedom to do something new every single week. I’ve been able to make a living simply taking ideas in my head and showing them to the world. One week I might focus on doing an in-depth video on how I made a particular invention, while the next week I’ll do some shorter content and film some funny product commercials. I simply love the flexibility and creative freedom it has given me.

Tubefilter: What’s next for you and Unnecessary Inventions? Where do you hope to be in five years?

MB: Who knows?! I have always never been much of a planner–I simply take life one invention at a time. So I know what my next invention is going to be that is coming out this week, but beyond that, I’ll take it one opportunity at a time as they come to me!