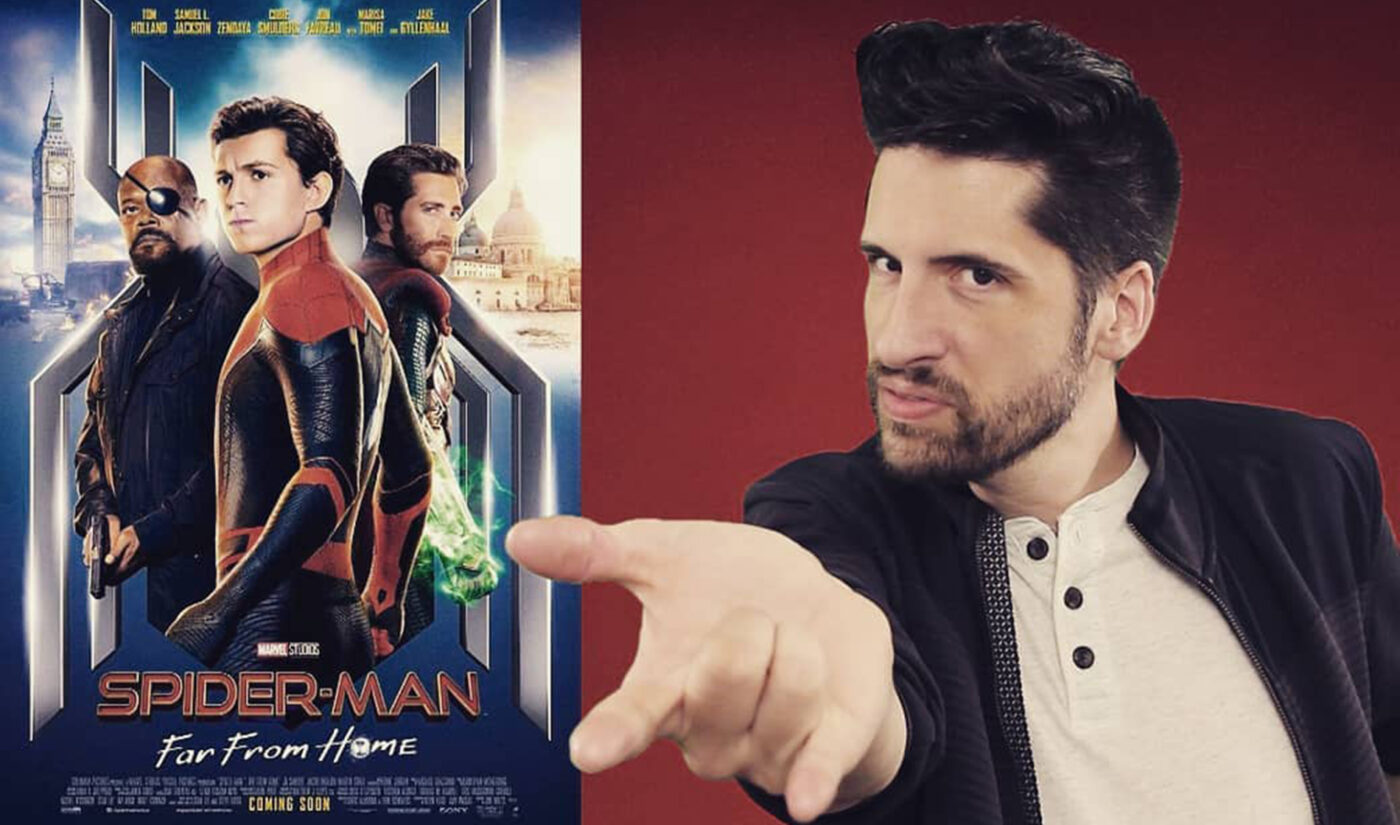 It was still the baby days of YouTube, so though a handful of film critics were establishing themselves on the fledgling platform, movie studios weren’t exactly banging down their doors to offer them press passes to early screenings. They had to wait for films’ public release days like the rest of us plebs.

Jahns, you see, was a projectionist–a resident of the little room high up in the back of a movie theater. The person who, pre-digital projection, swapped out massive rolls of film on hulking metal projectors, and who was singlehandedly responsible for maintaining and repairing said film and projectors. For Jahns, who’d long been in love with movies, it was the perfect position. When he started posting roasts and reviews of movies on YouTube, it became an even better job, because unlike his colleagues, he had access to movies days ahead of their scheduled screenings. That was invaluable, and gave him a significant leg up in those first few years of video-making.

These days, Jahns is no longer in the projection booth–but he spun the initial momentum that job gave him into a full-time career as a TV and film critic on YouTube, reviewing the latest and greatest and not so greatest Hollywood offerings.

Jeremy Jahns: I will always have a big “thank you” in my heart for all of my fans. I know I can honestly never say enough to my fans and people who watch my videos, all of whom have made my life as it is possible, but I’ll certainly try. I hope you all know that I take none of you for granted. I am absolutely consciously aware that I am where I am because of all of you, so again, thank you all!

JJ: Well, I grew up in a small town in western Washington, where I was a projectionist at a movie theater (and an assistant manager at a retail store at one point, but that’s a whole other side of miserable). I never went to college, but that’s only because (1) I was broke, and (2) I didn’t know what I would go to college to major in. Going to college aimlessly without a career in mind seemed like a bad idea from where I was coming from, so I remained a projectionist–which, I gotta say, was a fun job. It kind of depresses me that the job of “projectionist” is going the way of the dodo bird in this digital age, because the job was a blast. But screening the new movies at midnight is no doubt the reason that I cannot get into “filming mode” for my YouTube videos until at least midnight. All those years as a projectionist have set me up as a night owl for life.

Tubefilter: Was there a specific film that made you fall in love with movies? How did you come to be a movie reviewer?

JJ: There are quite a few for sure. The easy answer is Star Wars, but I do remember the 1989 Batman being an epic theater-going experience for me. Fast-forward some years, and I would hit up the new movies in theaters as an escape from my parents’ divorce. Fast-forward a bit more, and I would be a projectionist at a movie theater who would watch all the new movies as part of the job. I suppose I have watched new movies every weekend for decades. Makes sense that I would do it for a living.

Being a projectionist at a movie theater was pretty advantageous for a movie review channel on YouTube as well. YouTube wasn’t “legit” yet, so the few of us who were reviewing movies on YouTube didn’t get invites to movie screenings; my being able to watch the movies a couple days before other YouTube movie reviewers really gave me a bump in those early days.

Tubefilter: You started reviewing movies on YouTube way back in 2009. Why did you decide to launch a channel for your movie reviews? Did you have any ambitions about YouTube becoming a big part of your life, or was it just kind of something you were trying out?

JJ: Oh no, I never thought my channel would become what it has become. My first uploads weren’t even reviews at all; I uploaded a few fanmade trailers that I edited for the fun of it. It wasn’t until later that I would upload my first review (which my friends constantly encouraged me to do, so a big thank you to them). I suppose “review” is lightly used here; they were more like “roasts.” I just figured critics already exist, so I’ll just blast movies I hate on YouTube. It has evolved over the years, of course, partly due to the fact that being that angry on a weekly basis is exhausting, and affects your mindset in a completely negative way.

Tubefilter: How do you decide which movies and shows to review? Do you tend to pick things that are in your areas of interest, do you review films/shows you think will draw a lot of viewers…?

JJ: At first, when I was a projectionist with a YouTube channel, I would just review what my theater got. Now it’s more of a judgment call. To balance the job element and the hobby element of YouTube is a very important dance. Lucky for me, most of the films that will draw big views are ones that I genuinely look forward to. But there are moments where I make that decision to take a hit on views in the name of me finding optimal enjoyment in something (namely some streaming series). I used to do videos on each episode as they aired, but about half way through the season, it would become a grind. So I’ve recently just binged the series when it’s all out, and done a video on the entire season. I might go back to episode-to-episode videos, I gotta feel it out. My habits are rarely set in stone.

Tubefilter: What’s your production process like? How long does the average video take you to make, from start to finish?

JJ: That does entirely depend on the video. Videos where I talk about a new movie trailer are fun and take the least amount of time. Just gushing about what looks awesome, and joking about what looks silly. I love them. Movie reviews take a bit more time, because you want to get your point across in a concise manner. You want your video to be long enough to hit the points, but not so long that it becomes boring. Plus the added factor of travel to the movie screening and back, and a movie review day is a full work day.

A season or series of a show takes the longest to film and edit by a mile. I am not good at sitting in one spot for long periods of time, so a 12-hour editing session can become a bit much, but better that than phoning it in. I don’t script my videos (though I occasionally have bullet points for a longer video), so I pace my kitchen like a mad man until I have my thoughts in order. Then I’ll feel it all align in my head in a mental “click” moment, turn on the camera, and get to work. My pacing is much longer than my filming session. Which might seem like a waste of time for some, but this is the mental process.

JJ: Well, I don’t do videos daily. For the most part, the videos are planned via movie screenings. Sometimes I get surprised with a movie trailer drop on a random day, and have a surprise video day. As for my day to day, I’m surprisingly boring. I’ll make my rounds to the local retro game stores every now and then. Maybe hit up thrift stores to expand my VHS collection.

As I mentioned before, balance is important, so I do not believe it is healthy to have your only hobby be the one you turned into the job. You need something that has no pressure, no required upload time, and isn’t linked to your financial stability. Something you do “because you can.” This has led me to taking up hobbies such as Warhammer painting, learning guitar, and retro gaming. I’ve always been a gamer, but retro gaming is another kind of hobby. Also, painting miniatures (such as Warhammer) is deceptively meditative. I highly recommend it.

JJ: Yes, it is. I think it was around 2013 that it became my full-time job. I tend to be cautious when it comes to taking leaps like that, but at the point I made as much on YouTube as I made as a projectionist, I was like, “That’s cool….but let’s give it another year to see if it sticks.”

Funny enough: I’m still not 100% comfortable with the concept. Maybe it’s because I’m never 100% comfortable with anything, but making your career on YouTube is a world of unknowns and variables among an ever-shifting zeitgeist, whether it be with viewers, the ever-changing platform as a whole, or advertisers that might result in the next “Adpocalypse.”

Not that I don’t love what I do, but there are stresses with the YouTube gig that I feel people don’t talk about. Regardless, it’s still a blast, and as no job has a “guarantee,” so for my part, I can just be myself, give my honest opinion, and hope I don’t become boring.

JJ: My favorite part of being on YouTube is what it has allowed me to do off of YouTube. I am a pretty private person when it comes to this stuff, but YouTube allows me to help my family out (namely, my mom and dad) in ways I can never pay back to the viewers and fans who have made it possible. My family and I thank you all from the bottoms of our hearts.