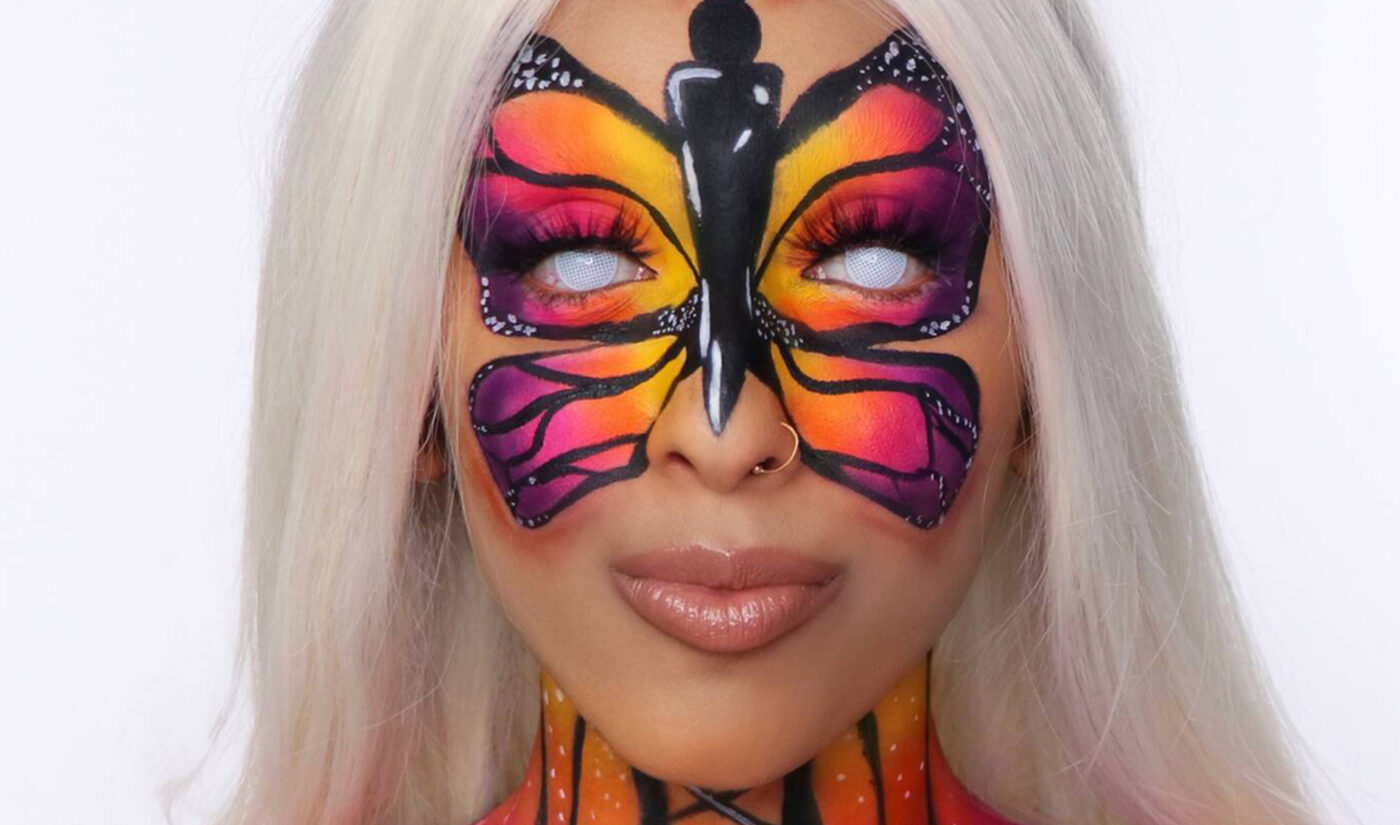 Seven years ago, Thivi was having a rough go of things. She’d recently been diagnosed with celiac disease, a complicated and often debilitating condition that causes people to have an immune reaction when they eat anything containing gluten. Trying to understand celiac, restructure her entire diet, and learn to mitigate the disease’s effects on her life was taking a serious toll on Thivi.

As an amateur makeup enthusiast, Thivi gravitated toward the platform’s gurus. She came to the niche with zero skills (her judgment, not ours!), but when she decided to try some of the styles she’d seen on herself, she was shocked at how quickly she was able to pick up techniques and recreate gurus’ looks.

By the time Thivi realized makeup could be more than a hobby, she was nearly finished earning a degree in kinesiology. After graduation, she moved into a job as a personal trainer. But within a year, she knew it wasn’t what she wanted to do for the rest of her life.

So she quit–and since then, making content has been her full-time pursuit.

These days, Thivi shares her own makeup looks–which range from the sort of glam night-out looks beauty gurus are known for to intricate, vivid portrait-style creations that cover her entire face in art–with more than 1.5 million subscribers on YouTube and 2.2 million followers on TikTok.

Tubefilter: Tell us a little about you! Where did you grow up?

Tubefilter: Where did your interest in makeup start?

Thivi: About seven years ago I was really into makeup, but I knew nothing about it. So that was the time where there were a lot of beauty tutorials on YouTube, and I would literally watch them every single day. It was a good distraction for me because I got diagnosed with celiac disease early on and it was really tough to go through. Watching these makeup tutorials really helped me, and by watching them, I learned so much.

From there I wanted to have a platform, especially YouTube, because that is where I learned a lot of my skills.

Tubefilter: How did you hit the point and go from, “I love watching these videos, I love watching YouTube” to “I want that to be me, I want to be on YouTube”?

Thivi: When I started watching these tutorials, I would go and do it on myself, and I would learn really quickly. I learned so fast from these girls, and I was like, wow, if they can teach me when I knew nothing—like, zero—then I can teach as well, because I’m so passionate about it.

I really wanted to do it, but I never really got the opportunity to start, because I was still in school and stuff like that. I would say around the end of 2016 or early 2017, that’s th etime when I first started uploading to YouTube.

Tubefilter: Were you in university at the time? What did you go for?

Thivi: I went for kinesiology and health science.

Tubefilter: Has YouTube been your full-time job since you graduated? Or did you/do you have a separate career in kinesiology?

Thivi: As soon as I was done school, I was working as a personal trainer for a bit. It wasn’t very long, maybe like…let’s say about a year. That was around the time where I was just starting to post, and then I quit that job to pursue social media full-time.

Tubefilter: This is another “When was the point…” question, sorry. How did you become confident enough to quit your job and go full-time? What was the catalyst?

Thivi: To be honest, it’s not like I quit because I was comfortable or anything. I was just like, “I’m not happy doing this.” YouTube was always in the back of my head, so in order for me to fully put my time and effort into it, I really needed to just quit and focus on doing my makeup.

Tubefilter: Your makeup looks are really, really artistic and creative. Did you used to watch creators who made similar looks, or did you learn the basics from YouTube and then expand to creative looks yourself?

Thivi: I learned the basics from YouTube for sure. I actually did the beauty/glam tutorials looks myself for a very long time. I would say I started getting into creative makeup at the end of 2019. That’s when I really started learning and practicing it. At the time I don’t think there were many “creative” makeup artists on YouTube. There were a few, so I started watching them, and then I was self-teaching, and in 2020 is when I started putting that type of content out there. It was something that was really fun to do, and it really tests you creatively as well.

Tubefilter: What was the audience reaction to those videos? Did you just keep doing them because you wanted to and enjoyed it, or were they generating more views than previous content?

Thivi: It was definitely both. I really, really wanted to do it, and I did see people gravitating toward my more creative makeup looks right away. Like, it was instant. And I just followed that path. I started putting out YouTube Shorts and they were all creative makeup and people just loved it.

Tubefilter: That leads right into my next question: YouTube Shorts has obviously had a huge effect on your channel. What has it done for your growth and career overall?

Thivi: Like I told you, I started around early 2017, and I actually had two YouTube channels before the one I have now. With those, nothing would really hit for me. I did a lot of long-form content and, as you probably know, makeup is a very, very saturated industry, so it was really hard to get my long-form videos out there. Then I was introduced to Shorts, and I was doing creative makeup at the time, so I just started posting. And within a couple of weeks, I started to see numbers and views that I’ve never in my life seen before on YouTube.

Tubefilter: You’re also on TikTok, where you have more than 2 million followers now. When did you expand over there?

Thivi: I actually started on TikTok first, like two or three months before I started YouTube Shorts. So they were growing pretty equally—I was seeing rapid growth on both.

Thivi: So initially, I did repurpose my TikToks as YouTube Shorts. However, once I started building a separate community on YouTube, they’re completely different from my TikTok audience. Some of my subscribers, they don’t even have TikTok, so they started requesting things I wasn’t doing, and I would specifically make content for them that I wouldn’t post anywhere else because the audience wasn’t on TikTok or on Instagram.

Tubefilter: You don’t see much crossover between your audience on TikTok and YouTube, then?

Thivi: I would say yes and no. They are in a similar age range, but they’re different in the sense that some YouTube subscribers don’t have TikTok, or they say their parents won’t let them have TikTok. So I would say age group, yes. But other than that, they’re completely different.

Tubefilter: You produce a wide range of looks, so this probably varies, but how long do your videos generally take to make, from conception to upload?

Thivi: It takes anywhere between, if it’s a very easy one, three hours at most, up to eight hours.

Tubefilter: Do you have anybody working with you behind the scenes, like an editor, or is this you doing everything?

Tubefilter: As you mentioned, the beauty space is incredibly crowded. How do you make your content stand out?

Thivi: For me, it’s just staying true to myself and being authentic and doing different things that I enjoy. That’s helped me sustain myself, because I was posting every single day, especially at the beginning. And when your community’s asking you, “Hey, can you do this? Hey, can you do that?”, you need to be able to give them what they want. I feel being true to myself and authentic and doing what I really love helped with that. I cannot imagine doing the amount of videos I did in a different niche or something like that.

Tubefilter: Do you have strategies for dealing with burnout?

Thivi: Yeah, that’s something I’ve faced more recently than I did at the beginning. I would say that if you create any type of content, you can experience burnout. For me, creative makeup is more exhausting, because you’re spending so many hours on it, so I’ve definitely dealt with burnout.

A strategy I did was to take one look and create many TikToks from it instead of just one or two, because it’s a lot of time going into them. So if you’re creating a lot of creative makeup looks all the time, then you are definitely gonna burn out and I don’t recommend that. So do one look, many videos, and then also doing compilation-style videos that you can post later, which allows you to take breaks in between.

Thivi: It depends on what content I’m making. If it’s like a beauty tutorial or review, it honestly feels like I’m FaceTiming a friend and just being myself. In terms of creative makeup, I just love being creative, and it feels like I’m doing a painting. It’s like…I’m so in the moment I just kind of forget about the real world, and I don’t even realize five hours has gone by. It’s just a really good feeling.

Tubefilter: Do you have anything else to share? Anything in the works that’s coming up?

Thivi: I actually do. I am planning on launching my own makeup brand, so I’m just getting ready for that. I’m really excited to see how my community and supports me. It wouldn’t be possible without them.