Creators On The Rise: Thanks To YouTube, Walt Disney And MTV Animator Patrick Smith Can Go Indie Full-Time 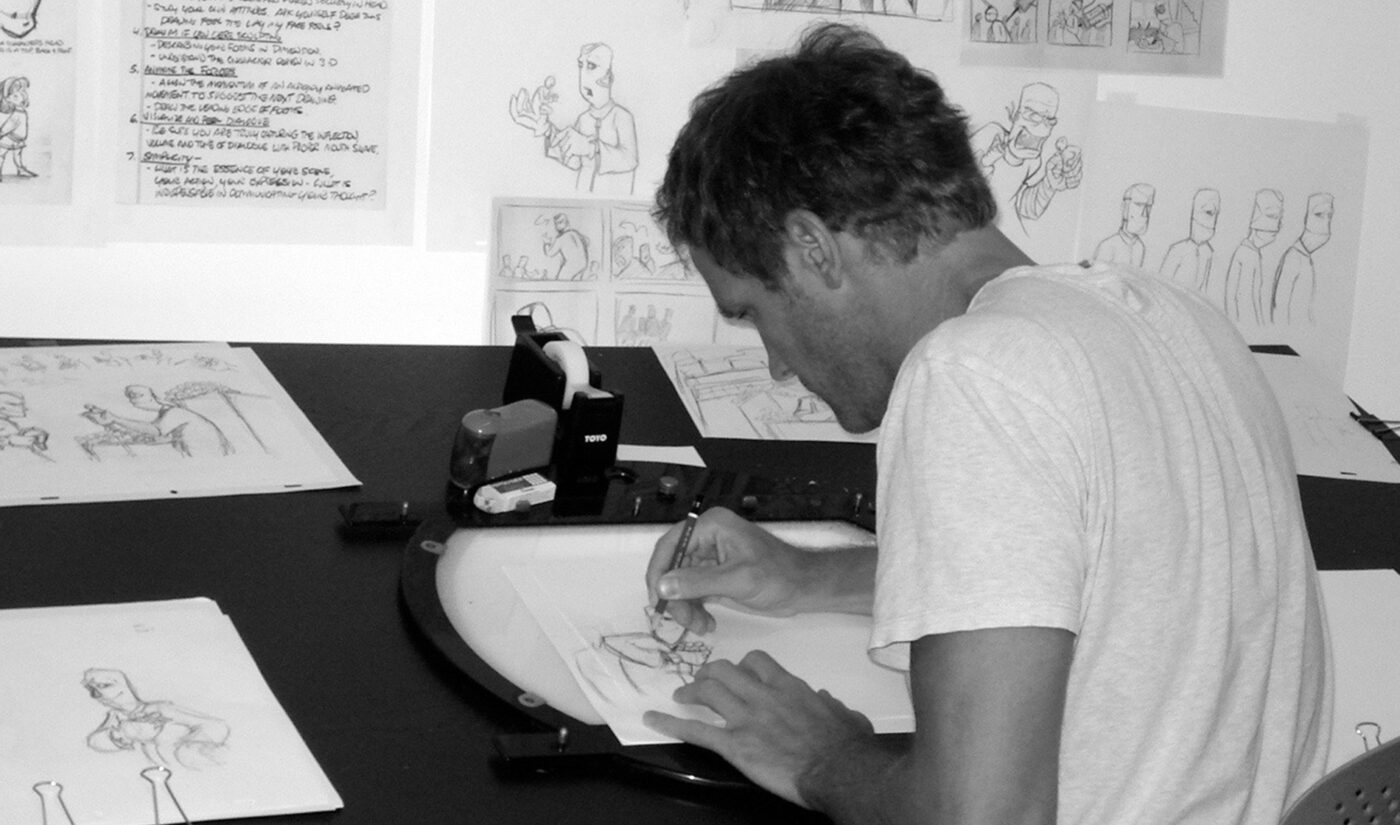 He was 21 years old, and his passion for art had been kindled the year prior by the work of well-known skateboard artist Jim Philips. Smith hadn’t yet begun to sharpen his own fledgling art skills, but he knew two things: he loved hand-drawn pieces, and he wanted to go to art school.

Not long after Smith applied to the California Institute of the Arts (aka CalArts) a prestigious university known for producing top-notch animators, he drew the blob. The blob wasn’t meant to be a big deal; it was a 10-second animation that Smith purposefully kept “abstract and weird” because, in his own words, he “wasn’t very good at drawing” (yet). Smith created it the old-fashioned way, by hand-drawing each frame on paper. When the bit was completed, he showed it to a friend, and that friend gave him some solid advice: that he should consider sending it in to MTV in the hopes that it would become one of the network’s famed ID spots.

Smith wasn’t so sure, but he recorded his animation to a VHS tape and mailed it to MTV’s headquarters.

Two weeks later, CalArts rejected him. That same day, MTV called and said it wanted to buy the blob.

Smith agreed to sell his 10-second clip to MTV–but that sale wasn’t the end of his relationship with the network. His ID spot went on to win multiple prizes, including a Broadcast Design Award and a jury prize at the 1995 Holland Animation Festival. So MTV called again, and this time, it offered him a job.

Thus began Smith’s professional art career, which led him from that first MTV job (working as an animator on Beavis and Butthead) to storyboarding for none other than Walt Disney to directing Beavis and Butthead spinoff Daria. While working on Daria, Smith began producing quirky, often social commentary-themed projects in his off hours, and when he needed a place to share them, YouTube seemed like the obvious choice.

Smith’s channel, launched way back in 2007, now holds 28 complete short films, all of them hand-drawn or stop-motion animated from start to finish by Smith himself. By the start of 2021, Smith had amassed around 274,000 subscribers, and was netting a few million views per month for films like Handshake, Pittari, and his most popular short film, Pour 585 (embedded above). 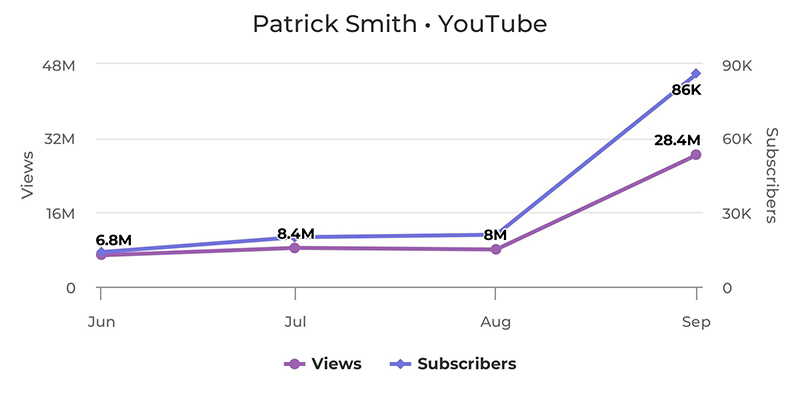 It’s impossible to say exactly which of Smith’s short films caused his channel’s engagement to jump in September, but by the numbers, Pour 585 appears to be a likely candidate. The five-minute piece follows an anthropomorphic wine glass who’s on his way to undergo a transformative rite of passage. Leery of what will happen to him, the glass fights the ritual’s overseer and…well, we won’t spoil the rest.

Smith describes Pour 585 as “a cautionary tale about the dangers of conformity that uses metaphor to illustrate the process of indoctrination.” To date, the film has brought in a whopping 128 million views on YouTube–and that traffic certainly helped push Smith’s channel from 6.7 million views in June, 8.3 million in July, and and 8 million in August to more than 28 million in September. In the same timeframe, Smith went from 370,000 subscribers to, now, nearly 540,000.

For Smith, this channel growth is a sign that he’s fast approaching a longtime goal: being able to support himself and his family by working on his own independent projects full-time.

Tubefilter: Tell us a little about you! Where are you from? How did you get into art and animation?

Patrick Smith: I’m a product of the 90s. I grew up in Boston, and my first exposure to art was the brilliant artist for Santa Cruz Skateboards, Jim Philips. This interest in skate art morphed to film when I opened a book on animation in 1993 (20 years old), and I was just totally hooked.

One of my earliest attempts at animation has an interesting story. In 1994, I animated a strange 10-second hand-drawn piece, a morphing blob revealing different haggard faces. I wasn’t very good at drawing, so I kept it abstract and weird. A friend of mine told me I should put a logo on it and send it to MTV–they were doing a lot of very cool ID spots back then. So I mailed a VHS tape of the animation to MTV Networks, the address I got from a phonebook. About two weeks later, they called me up and said that they wanted to buy it. I remember the day, because it was the same day that I got rejected from California Institute of the Arts. The spot won a Broadcast Design Award and a Jury Prize at the 1995 Holland Animation Festival.

After that, MTV offered me a job on Beavis and Butthead, which was my first ever studio job, bringing me to New York City, where I desperately taught myself more about animation, mostly on the job.

Tubefilter: How did your career progress from there? Did you ever end up going to art school? How did you get a job storyboarding at Walt Disney?

PS: I spent a few years at MTV, and after animating the hallucination sequence on the Beavis and Butthead movie, I was offered a job storyboarding at Disney, which had just opened up a studio in New York to make the TV series Doug and 101 Dalmatians.

Storyboarding led me to directing, and I returned to MTV a few years later to direct the show Daria, which was a spinoff of Beavis and Butthead. Around this time, I started making personal independent short films (the first of which was Drink in 2000…I can’t believe how long ago that was).

PS: It fit me perfectly. I’d been making short films for years, but outside of film festivals, I never really had a place to put them in front of an audience.

Tubefilter: A lot of your work is traditionally hand-drawn, but you also do experimental stop-motion. What is so appealing to you about both of these styles? Do they each help you accomplish different things when it comes to storytelling?

PS: The dichotomy of hand-drawn and stop-motion was 100% a product of my desire to experiment and not to get caught in a single medium. I found that stop-motion helped me to create content that has more complex ideas than hand-drawn cartoons, tackling issues I’ve always thought about but couldn’t quite express. The YouTube audience seems overwhelmingly more interested in the hand-drawn films, but the stop-motion films are a lot more successful critically and win a lot more awards at film festivals.

Tubefilter: Tell us a little about your production process. How long does one short film take to put together, from conception to upload? Is there anyone else working with you behind the scenes, or are you a one-man band?

PS: I’m definitely a one-man band. A typical hand-drawn film takes me about two months to make, depending on the complexity of design and idea. Right now, I’m making a sequel to my film Pour 585, it’s very complex and has taken over two months (should be done by Nov. 1). Most of my ideas have been on my mind or in my sketchbook for years before I finally decide to sit down and storyboard them out.

Tubefilter: Recently, quite a few of your short films have generated millions of views, which in turn has significantly grown your channel’s subscriber count. Do you know how your films took off? Did you promote them, did someone share them, did the traffic come organically through YouTube…? Was there one video that did particularly well, and drew attention to the others?

PS: My first successful video was Handshake in 2014, which was a film about how relationships can be very sticky situations, which I visualized by having two people stick together like Silly Putty.

There was a slow and steady increase for a long time, but things really took off in 2019 with Pour 585, which got over 125 million views only two years after I posted it. Pour 585 is a simple film that illustrates the process of indoctrination, using characters with wine glasses as heads. I did a lot of promotion for that leading up to the release. It had a successful film festival run the year before (including qualifying for the Oscars for Best Animated Short), so I think that organically helped it gain traction once it was posted.

The other short that helped a lot was my film Masks…at 11 million views, it’s an important video for me because it’s a lot longer than my other videos, and generates a lot of income for the channel.

Tubefilter: What else are you up to outside of YouTube? Are you working on any projects right now? Do you have any other gigs? Talk us through the average day!

PS: I start my day at 5 a.m. I answer YouTube comments for about 20 minutes before I start drawing. I really love reacting to comments on YouTube, it means a lot to me that people take the time to watch and then to say something about it!

Typically I have a few commercial jobs or a music video to do. But sometimes, like now, I can work full-time on my next film. I end the day early, around 11 a.m., and I do whatever I want for the rest of the day, typically hanging out with my family, cooking, or working on our house here in Montauk, New York. I try very hard to disengage and get animation out of my mind until the next morning, when it’s time to start it all again.

PS: 100% yes. I’m turning down commercial jobs more often these days. And I’m really close to being able to make short films full-time, for the first time in my career. I’ve always had to balance paid work with personal projects, and the prospect of making a good living making animated shorts is finally becoming a reality.

PS: I absolutely love the engagement with viewers. I love reading well-thought-out comments, and getting into discussions about art and storytelling. I find it incredibly inspiring. Also, I’ve made some really good friends, with viewers and other creators. I’m also addicted to the ebbs and flows of views and subscribers, the analytics allows you to learn so much about your own content and how audiences react (or don’t react). It’s also just exhilarating to know that your animation is being seen by so many millions of people.

PS: In five years, hopefully I will still be doing this! My next film is called Pour 668, a sequel. Also, I did a really weird music video, which I’m waiting anxiously for the OK to post; it includes brain removing robots and six-legged dogs.

I have so many more short films to make–the challenge is to find the time to make them, and hope people will be patient enough to wait a month or two between shorts.

I really believe in quality over quantity, and I think engagement with viewers is very important, which I hope makes my channel a tiny bit unique.