Insights: Netflix Looks To An Immersive Future With Gaming Initiative 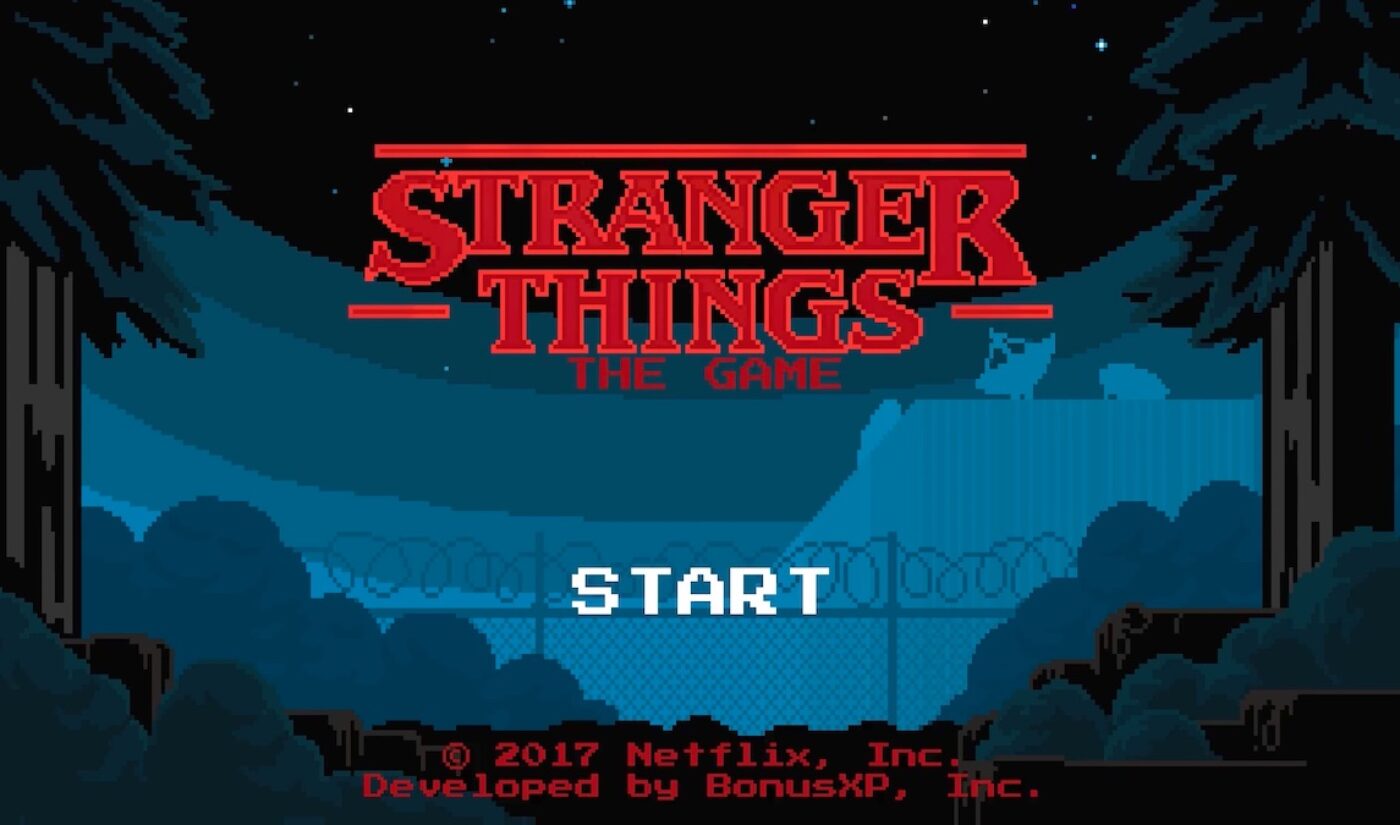 It’s getting a bit dizzying keeping track of all the ways Netflix, the O.G. online streamer known for ladling dozens of series and movies a month onto its subscribers, is busy trying to do a whole bunch of other things beyond video.

The moves promise to reshape the world’s biggest streaming service into something a bit wider, perhaps less focused, but also more engaging and sticky than what’s on offer from its burgeoning competition. And by competition, I mean not just other streaming services, or even traditional linear movies, cable, and broadcast TV.

Just as Netflix co-CEO Reed Hastings routinely does, I’ll define “competition” as TikTok, and YouTube, and live sports, and Fortnite, and a bunch of other things that can deeply absorb our attention for hours at a time.

Like the social media companies that have (in sometimes deeply problematic ways) engineered their interfaces to keep you clicking, flicking, connecting, and “engaging” for hours, Netflix clearly understands that its main job is to keep us wanting to use it more than anything else. And it’s now going to try to build new ways to keep you connected to its service for even longer.

Netflix took a big step into the future, using its quarterly earnings call Tuesday to detail plans to move into video games as a free enhancement to its existing subscriptions. It previously announced the hiring of Mike Verdu, a well-respected veteran of Electronic Arts and Facebook‘s virtual reality unit Oculus, to head the new game division.

Netflix is hardly the first media company with an in-house game unit. The rise and fall and rise of game divisions at Disney, Warner Bros., and other studios is a long and tortured history. And of course, Sony makes more money from industry leader PlayStation than it does from any of its movie, TV, and music divisions.

And Netflix isn’t the first tech giant to have a gaming investment either.

In March, Facebook Watch wrapped the first season of Rival Peak, a hybrid show with a vibe that crosses Big Brother, Survivor, The Sims, and secret government lab. It features 12 animated characters controlled by the collective decisions of hundreds of thousands of viewers, with a weekly highlight show hosted by Wil Wheaton. CEO Jacob Navok said the show racked up 100 million minutes of view time, 96 percent of it on mobile devices.

Creator Genvid calls Rival Peak a “massive interactive live event” (aka MILE) and just raised $113 million from a range of big-name investors. Navok said the company has four other such MILEs in development, all paired with prominent franchises.

Meanwhile, Microsoft has Xbox, dozens of excellent development studios, and the Windows operating system that is home to most PC gaming. Apple has Arcade and the vast mobile game ecosystem on its iOS App Store. Even Amazon is making games, if not very successfully, alongside its vast video investments, which include Twitch, the gamer world’s livestreaming megaphone. 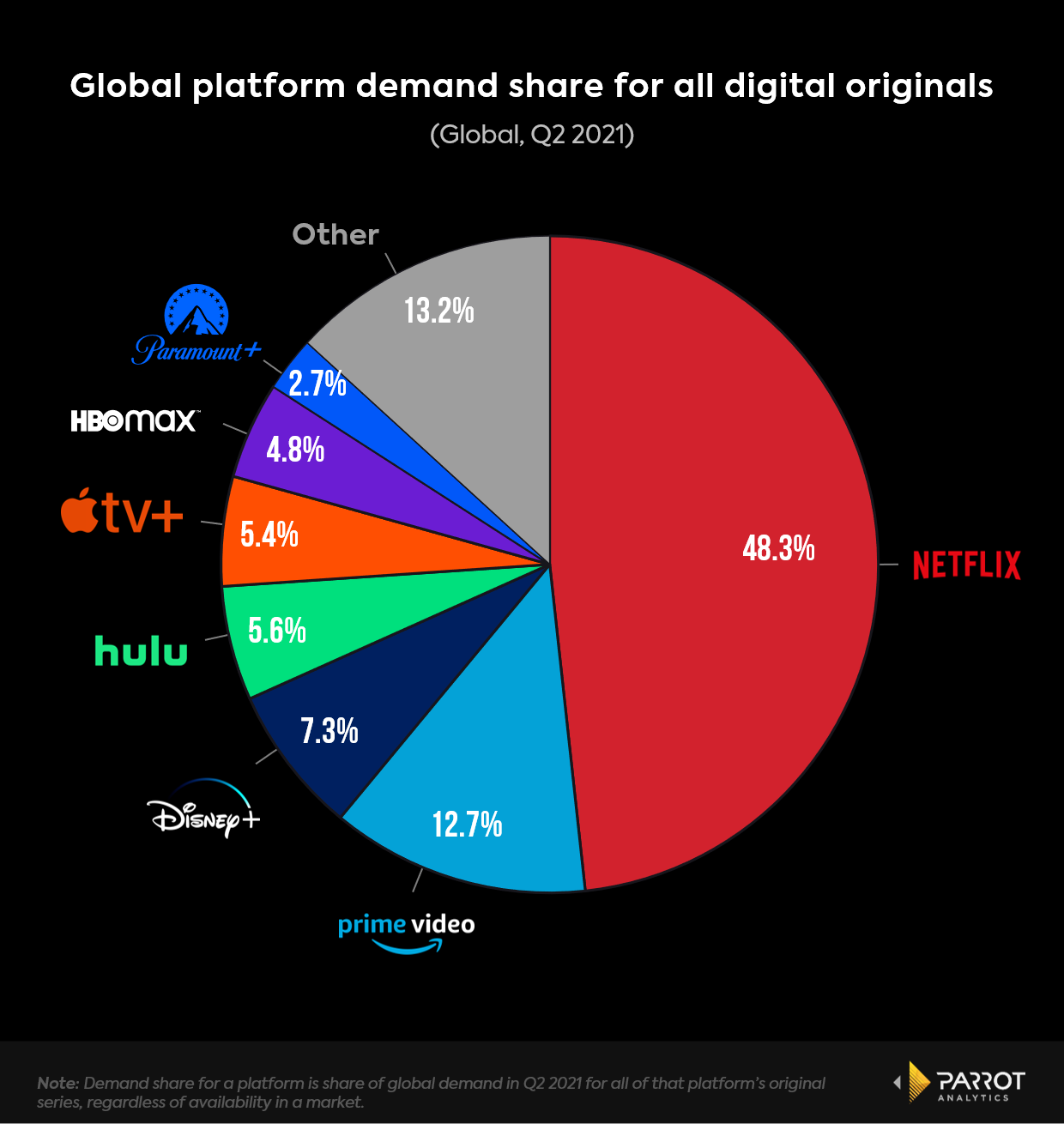 For the first time, audience demand for Netflix original shows comprises less than half the overall total, according to Parrot Analytics.

Netflix has plenty of motivation to diversify beyond video, though, and fast. Parrot Analytics this week released data suggesting audience interest (it uses a metric called demand share) in the streamer’s original programming is dropping compared to  other streaming services. For the first time last quarter, Netflix originals commanded less than half that audience interest, though its share was still bigger than the next six services combined.

The key here is that streaming competition is growing fast. Netflix can keep spending $17 billion or more per year to make new shows, while everyone else does much the same thing. Or it can explore ways to move beyond the  single pillar of its substantial success.

To its credit, the company has experimented with games for a while, part of a long-running internal conversation that executives said was typical before embarking on big new initiatives.

Back in 2018, Netflix made a splash with Bandersnatch, a relatively simple choose-your-own-adventure episode of Black Mirror, its creepily spot-on anthology of the dystopian side of our onrushing future.  Netflix also has licensed games to experienced developers based on its biggest original hit, Stranger Things.

Next week, the company kicks off a touring virtual reality experience,Viva Las Vengeance: Army of the Dead, built around its recent Zack Snyder-directed action horror film. Some 75 million subscribers watched during the movie’s first four weeks of release, Netflix said, making it one of the company’s 10 most-watched movies ever.

Viva Las Vengeance lets up to six participants fight virtual zombies from inside a taco truck over a 30-minute experience that evokes key parts of the movie. The experience also features themed food from Sin City Tacos, including Zombie Mulitas, Tacos Alphas, and the Viva Burrito.

The experience, which was developed with Fever and Pure Imagination Studios, is scheduled to debut in New York, Los Angeles, Las Vegas, and Washington, D.C., with plans to bring the experience to 17 more cities in coming months.

It’s tempting to think of that sort of traveling experience as simply a marketing extension, another part of Netflix efforts to build a narrative universe that’s already spawned a prequel and a spinoff.

After all, Netflix spent an estimated $879,000 on TV advertising for the show, and generated more than 51 million impressions, according to estimates from iSpot.TV. The company also sprinkled 10 trailers and other videos across Facebook and YouTube, grabbing nearly 20 million views, according Tubular Labs.

But it’s more useful to put Viva Las Vengeance and the game initiative together as part of a broader effort to move Netflix into the next generation of entertainment, with the kinds of immersive experiences that have been called virtual reality, mixed reality and augmented reality.

All the big tech companies (and don’t forget Snap, the original AR innovator that just had a fabulous quarter) are investing billions in immersive technologies, because they know it represents the next stage of computing, beyond desktops, mobile phones and tablets.

If Netflix wants to continue to be relevant in this next generation of entertainment (and information, news, sports, work, and much else), it needs to begin learning now how to make immersive experiences that keep its subscribers around, watching its offerings for hours at a time, and paying for its subscriptions for years to come. In multiple meanings of the term, it’s just a matter of time.