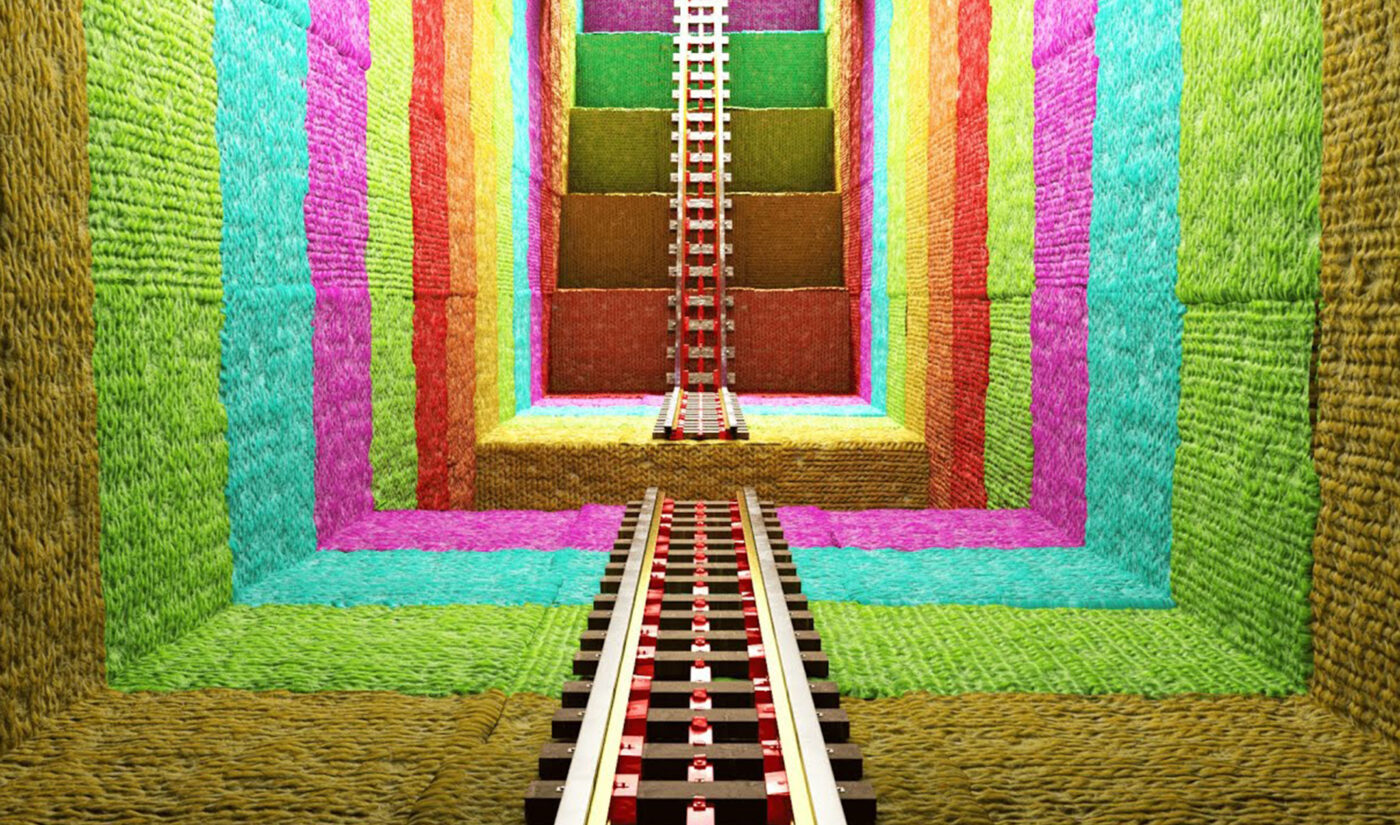 Jake Fellman just wanted to show prospective clients what he was capable of.

A year ago, Fellman was on the verge of graduating college. But unlike many of his classmates, who would walk the stage and go on to take their newly minted degrees out for a job hunt, he already had a post-grad position lined up–at his own company.

Fellman, a longtime artist, originally started his freelance design business in 2018, shortly after expanding his 2D art skills to 3D modeling and animation. His productions skewed toward (as he puts it) “dry, explanatory content” about manufacturing and luxe electronics–a busy niche that he knew would easily amount to 40 hours a week once he was out of school. Despite that assurance, though, he wanted to pad his established client base to be sure his full-time work would stay full-time.

Fellman launched his channel in September 2020 with the sole intention of using it as a portfolio. His earliest videos–short, often chaotic clips of cartoony characters he modeled himself–align with that plan.

But then Among Us happened.

As much as Fellman is an artist, he’s also a gamer. And like millions upon millions of other gamers stuck inside during COVID-19 lockdowns, he became entranced by the multiplayer murder game. His fascination soon crossed into his art, and on Sept. 24, he posted his first Among Us animation to YouTube Shorts.

To date, that 24-second video (about the comedic tragedy of trying to report an impostor, only to draw the sus spotlight to yourself) has amassed more than 22 million views. 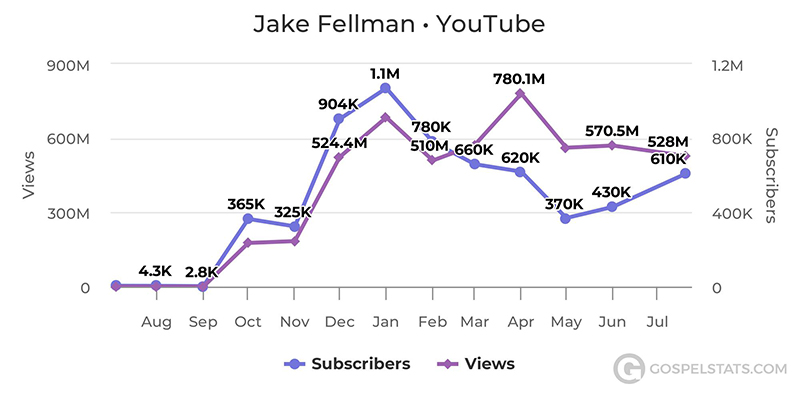 For Fellman, the success of that single video was a sign to keep doing what he was doing. He went on to produce 90 more Among Us-themed videos over the next three months, and dozens of them netted at least 10 million views each, driving his channel from around 24,000 views in September to more than 524 million in December.

By the start of 2021, the Among Us fever was fading. Fellman, however, had a backup: YouTube’s most popular game, Minecraft. Like his Among Us videos, his Minecraft animations focus on funny, relatable, or just plain visually intriguing moments that depict what Minecraft might look like in “real life” HD.

Fellman uploaded his first Minecraft animation Feb. 21. In the four months since, he’s uploaded nearly 70 more clips that collectively have helped drive his channel to nearly 600 million views per month, and from one million subscribers to more than 6 million. This steadily growing audience has convinced Fellman that his channel can be much more than a demo reel–it can be a career all its own.

Tubefilter: Tell us a little about you! What’s your name? Where are you from? How did you get into digital art?

Jake Fellman: My name is Jake Fellman, and I was born and raised in Wisconsin.

Digital design became a favorite pastime of mine shortly after my first exposure to Adobe Photoshop in 2014. A few years of playing in the land of 2D graphics had me itching for more as I began to feel my creative aspirations capped by the abilities of the software. On a lazy Saturday afternoon in 2018, I finally decided to jump into the notoriously complex realm of 3D modeling and animation.

I studied marketing at the University of Wisconsin-Madison, where I earned a bachelor’s degree in business administration in 2020. During my sophomore year of college, I launched a freelance design business and progressively developed my list of clientele. By the time graduation rolled around, this business had become my full-time job, as it had blossomed into a comfortable source of income.

The upbeat, shortform skits that you can find on my TikTok/YouTube accounts are a relatively new venture for me. My experience creating 3D work for clientele has historically skewed toward dry, explanatory content for industrial and high-tech electronics.

JF: I’ve been playing Minecraft since its initial release in 2011. At the time, I didn’t own a console and was stuck playing the pocket edition on my iPod Touch. In 2013, I finally got an Xbox (along with a copy of the Bedrock Edition) for Christmas. Although the game’s features back then pale in comparison with those it ships with today, I remember being very content just exploring the land and creating simple structures. Present-day, the game still holds a special place in my heart, and I continue to play on a weekly basis.

My YouTube channel got its start off the back of Among Us content–I produced 90 videos that cumulatively earned around 3 billion views. However, the game began losing popularity in early 2021, as many players had become bored with its repetitive gameplay. I was ready to pivot to a new subject matter, and Minecraft was the perfect fit. Its large base of active players allows for massive potential viewership, and the simple graphics leave plenty up to my artistic direction.

I started posting my artwork online in April 2020, with the intention of cultivating an audience to leverage as a marketing tool for my freelance design business mentioned earlier.

JF: There are a few factors that created a “perfect storm” for my sudden success on YouTube.

First and foremost is the fact that I was one of the earliest adopters of YouTube Shorts as a whole. There was a time when you could look at “#Shorts” on YouTube and see my content practically dominating the pivot page. Secondly, I have a very distinct art style that no one else quite replicates on YouTube, allowing me to stand out in an already small pool of creators actively making Shorts.

The final contributing factor is the subject matter on which my content revolves: Among Us was the biggest video game sensation of 2020. And now, the Minecraft community is as strong as ever.

JF: At the moment, there is no long-form content on my channel–Shorts are the only force at play when it comes to my channel’s growth. I don’t have much experience making long-form content, so I’m not the best person to compare all of the pros and cons that they each bring to the table. However, I do know that if I were to be making 10-minute videos, I would only be able to post once each month due to the time-consuming nature of 3D animation. Bite-sized content is perfect for animators because it allows for a faster production cycle and thus a more regular posting schedule.

Now is the best time to be a Shorts creator, as the Shelf is still relatively uncluttered. Many of the biggest creators in the shortform world (Charli D’Amelio, Lil Huddy) have yet to post their first YouTube Short. Inevitably, the space will fill with migrating TikTokers, and it will be increasingly difficult to make a significant mark.

Tubefilter: On your channel, you mention it takes around eight hours to make the average short video. That’s wild! Can you talk about your production process?

JF: The first (and arguably most important step) is finding the right idea. I consume quite a bit of Minecraft-related memes from a wide array of content creators on all platforms and keep a notepad filled with inspirational concepts I see others producing. I mix these notes with random shower thoughts and my own experiences in-game to make something uniquely mine while simultaneously following the footsteps of concepts that have proven to be successful for others.

Once I have a fairly concrete idea, I sketch out each shot to help clarify what assets I need for the production. I also take time to lock down the camera angles that I’ll be using throughout. This part of the process is called storyboarding. I move forward with creating any models which are unique to the animation at hand. Since I produce series-based animations, I can reuse the vast majority of my models and rigs. The creation process for new assets can be a 10-hour project on its own, so I only introduce new models that I deem essential for the animation at hand.

The vast majority of my time is spent animating the video itself, which is done with “keyframes.” The process is simple–transform the asset slightly in the 3D space, set a “key,” move forward in time, transform the asset to the next position, set another “key,” repeat. Next up, the scene has to be detailed beyond just the moving parts–I add in lights and environmental assets (this includes things like trees, grass, clouds, and stone backdrops).

Once the scene is complete, the animation goes through a process called “rendering;” the computer needs an additional eight hours(ish) to run calculations idly. I typically have this lined up with my sleep schedule so that I can wake up and finalize the animation through post-production touchups such as color correction in After Effects. Then it’s finally time to post!

JF: I strive to be a source of utterly unique content that is satisfying, addictive, and mentally stimulating. I want to provide my viewers with engaging videos in a style that no other creator produces.

JF: Shortly after reaching 100K subscribers in October 2020, I began to wrap up the relationships I had with my freelance client base. By the end of 2020, I was nearing 2 million subscribers and had phased out all freelance work, ready to start the new year as a full-time content creator. Now, my overarching goal is to build a sustainable entertainment business that I can continue to develop for years to come.

Tubefilter: What’s your favorite part of making content as a whole? How does posting your art on TikTok/YouTube help you as an artist?

JF: After grinding away at an animation for hours, sharing it with the world gives me a unique sense of satisfaction. My favorite part about creating content is pressing the “post” button and being sure that millions will appreciate my hard work. It feels terrific to know that there are people on the other side of the screen waiting to see what I’ve created.

JF: I plan to continue creating Minecraft videos for the remainder of 2021. There is a huge update coming to the game in December, and I’m positive it’ll spike a surge of new viewers for my channel. In 2022, I plan to branch out into a new video game series–I’m currently considering a few options, including Five Nights at Freddy’s, Roblox, and Super Mario.

In five years, I plan to hire additional animators to help with producing content so that I no longer have to sit in front of my computer for 10 hours every day. I’ll step back into a managerial position and lead creative direction for the studio, and as a team, we will tackle more significant projects such as 20-minute shows or full-length feature films.