Creators On The Rise: Cam Casey Spent The Past Year Conquering TikTok And Snapchat. Now He’s Making His Move On YouTube Shorts. 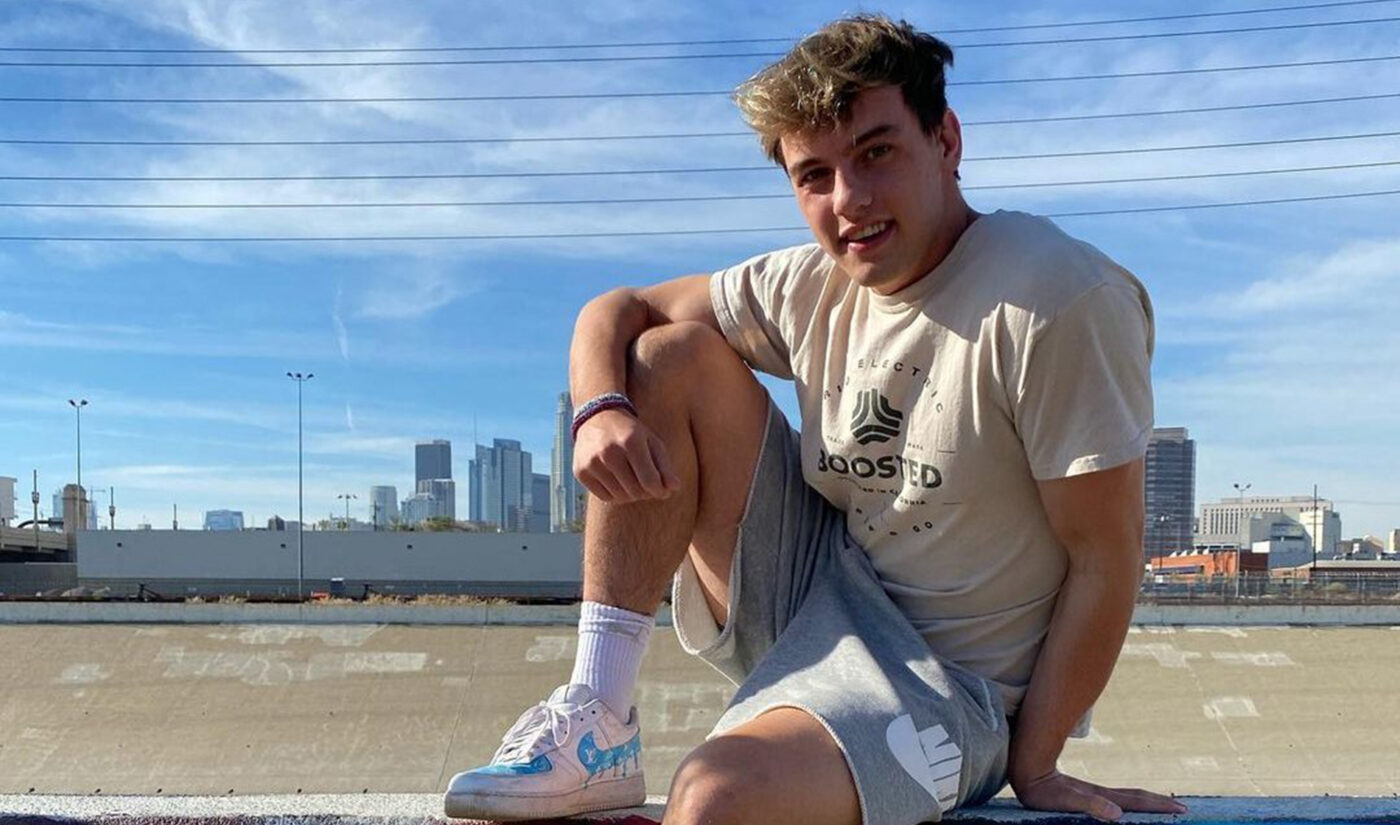 Cam Casey has had a whirlwind year.

And if there’s one thing the past twelve months have taught him, it’s that getting in on the ground floor of new platforms is a key part of his success.

As a high schooler, Casey–who’s now 19 and based in Los Angeles–dreamed of being a YouTuber. He launched his channel in 2017 and filled it with a range of clips about travel and trendy topics like Fortnite, but despite his efforts (and objectively impressive cinematography), his content failed to net him a sizable following.

Then, in 2019, Casey, like many, many other Gen Z’ers, discovered TikTok. He promptly carried his content to the shortform platform, where he zeroed in on chronicling his adventures in abandoned locations. Not all of his early videos took off, but the ones that did brought hundreds of thousands and even millions of views. It was the kind of success Casey had hoped to find on YouTube, but he had no qualms about hitting pause on his channel there and switching his focus to whatever platform generated the most traction for his videos.

Casey’s TikTok account–where he’s settled firmly on trendy pop experiment content like filling balloons with Mentos and Coke and testing mind-bending illusions–now has more than 8 million followers, and he still uploads there at least once per day.

However, TikTok is no longer his sole focus.

Over the past eight months, Casey has changed tack twice more. In November 2020, he saw potential in Snapchat’s TikTok competitor, Spotlight, which debuted with a tempting promise: it would divvy up at least $1 million per day amongst the creators of top videos.

Casey began crossposting hundreds of his videos from TikTok, and by January, his efforts had paid off–he’d made a collective $3 million from his clips. By March, he’d used a chunk of that money to buy a snazzy McLaren 620R (base price: $300,000), and had begun investing in real estate, he says.

He still uploads to Snapchat, but like TikTok, it’s no longer his sole pursuit, because in April, he expanded to YouTube Shorts. 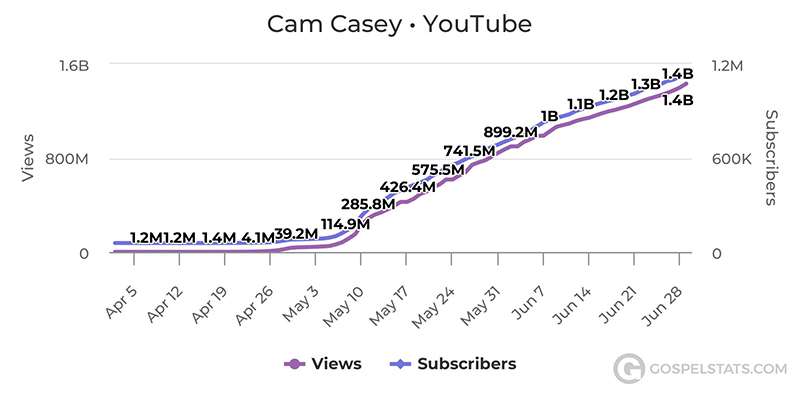 Since April, Casey has uploaded more than 400 videos to YouTube Shorts, and nearly 20 of them have brought more than 20 million views each. His most popular clip, an on-brand Mentos-and-Coke explosion, has more than 200 million views.

These videos helped push Casey’s channel from 34,000 views in March to 38 million in April, then a whopping 804 million in May and 629 million in June. His subscriber count has similarly skyrocketed from 50,000 to 1.2 million.

Casey’s multiplatform strategy has made content creation his full-time job, and his success has fanned the flames of his YouTube ambitions. His new goal, he says, is to reach 10 million subscribers.

Tubefilter: Tell us a little about you! What’s your name? Where are you from? What did you do in ye olde days before TikTok and YouTube?

Cam Casey: My name is Cam Casey and I am a 20-year-old content creator originally from Chicago, but now live in Los Angeles. Before YouTube and TikTok, I was a photographer and high schooler!

Tubefilter: We see you’ve been uploading longer-form videos on YouTube occasionally for a few years. What made you start a YouTube channel originally? Did you want YouTube to be your career?

CC: Originally, I started my YouTube channel because it seemed like fun and I loved to make videos! I have always dreamed of YouTube being a career for me! Creating fun, engaging content has been a passion of mine for some time, and I am fortunate enough to be able to do this full-time now.

Tubefilter: When and why did you start making content on TikTok? Did you start your account knowing what kinds of videos you wanted to make, or did you discover your content niche along the way?

CC: I really started to focus heavily on TikTok and creating shortform video content at the beginning of 2020. I started to see some success early on and kept grinding trying to find what works well and what doesn’t. I sort of discovered my niche along the way, and have always been changing and evolving to new trends!

Tubefilter: When and why did you start uploading clips to YouTube Shorts? Do you crosspost your content from TikTok, or make different content for each platform?

CC: I started posting Shorts soon after the beta was released. I have learned to try and be early to the game when new platforms emerge. For example, when Snapchat came out with the Spotlight platform, I was literally posting videos on that platform the day it launched. I started using videos I had made on TikTok and put them on Shorts, but now I do a combination of original shorts content and repurposed content.

Tubefilter: Your YouTube channel has recently seen a noticeable boost in subscribers and views. Do you know which video or event triggered this increase? What do you think made that video particularly popular?

CC: I had posted a video each day for 44 days straight, and got nothing. On the 45th day, I noticed one of my videos started to pick up some decent views! That video now has over 200M views! I think it did so well because the watch time was over 100% and there was no English, resulting in a worldwide viral video.

CC: Shorts has been a game-changer for my channel. I had a little over 50k subs before Shorts, and now I have been gaining half a million-plus subscribers every month! The views have been great as well! I think what Shorts does is create more discoverability for creators, which is obviously huge when you are looking to grow your subscriber base.

Tubefilter: What’s your production process like? How long does the average video take from conception to posting?

CC: Videos on average will take me about 30 minutes to make about a 30-second-long video! Sometimes I have a ton of ideas and I can crack out a lot of videos, but other times, I really have to brainstorm ideas and obviously execute the video well. So, it can vary quite a bit.

CC: I hope people either learn something or try something new from my content. At the end of the day, though, I just hope they are entertained and enjoy the content.

CC: Content creation is my full-time job. I do various investments on the side, but creating content is my number one priority! Since having success on Shorts, not too much has changed because it does not pay, but once YouTube starts monetizing Shorts, I believe it will change my priorities even more!

CC: My favorite thing about making content is the freedom it gives me and the fact that it’s always been something I’ve wanted to do!

CC: In the immediate future, I want to continue to make great shortform content and continue to grow my numbers to hit that 10M subscriber mark with YouTube Shorts! Other than that, I have a very successful show called Cam Casey on Snapchat and continue to grind out content for TikTok.

Other than content creation, I have a real passion for real estate investment and cars. I have already started to build out a portfolio of short-term rental real estate and envision that part of my business to be much larger in five years. That’s how I afford/justify these crazy cars I love!