Creators On The Rise: COVID Kept Magnus The Therapy Dog From Visiting Hospitals—So His Handler Took Him Online 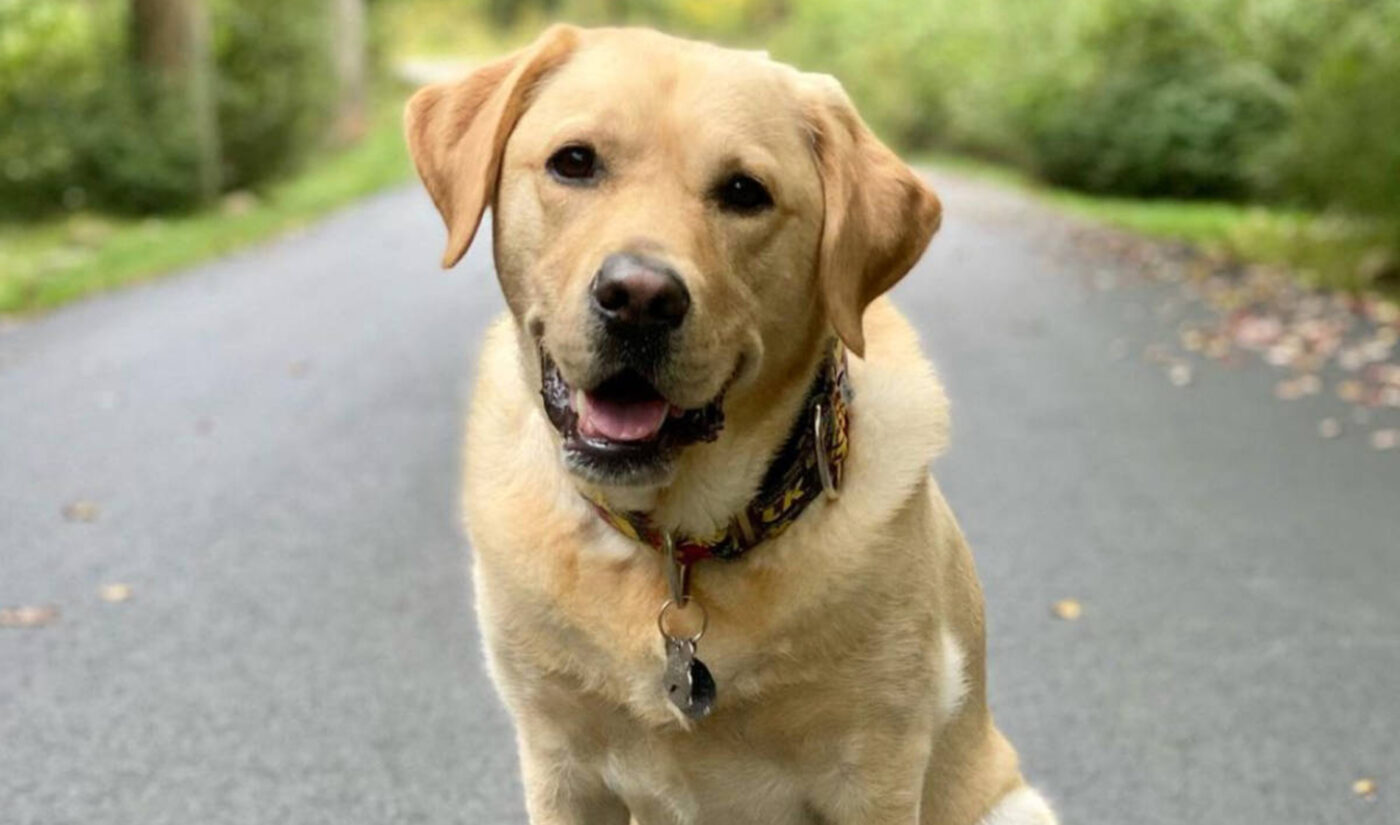 Before the pandemic, Magnus the yellow Labrador and his handler, Brian Benson, were regular visitors to New York City’s hospitals and schools.

Magnus was originally bred to be a service dog for the blind, but when that didn’t work out (as is sometimes the case), Benson’s family adopted him. Right away, Benson tells Tubefilter, they saw he had an unflappable, uniquely relaxing temperament, especially around children.

The family decided to have Magnus tested for therapy dog potential–a test he passed “with ease,” Benson says. Unlike service dogs, therapy dogs aren’t trained to assist a specific person with medical or other disability-specific tasks. Instead, they are taught to volunteer in a range of environments–everything from veteran facilities to nursing homes to mental health wards–where they provide a calming, affectionate presence.

Once Magnus was certified for therapy, he and Benson became a familiar sight at local facilities. Each week, they visited hospital wards to comfort clinically and terminally ill patients, and traveled to schools to meet students dealing with emotional issues and learning disabilities.

But, like many things, Magnus and Benson’s trips were derailed when COVID kicked in. With hospitals and schools abruptly closed to visitors, Benson opted to take Magnus’ skills to a new locale: the internet.

Benson doesn’t know which video triggered the channel’s sudden growth, but its biggest video yet is a Nov. 18 upload where Benson and Magnus photocopy an image of Magnus’ paws inside Benson’s hands. That 11-second video has brought in more than 30 million views.

The channel’s next biggest, with 5.7 million views, is a 15-second bit where one of Benson’s daughters jokes about Magnus’ bike-riding capabilities.

Benson says that so far, Magnus’ growing popularity has opened the path to longer-form, potentially educational content about therapy dogs and the impact they can have on the people around them. 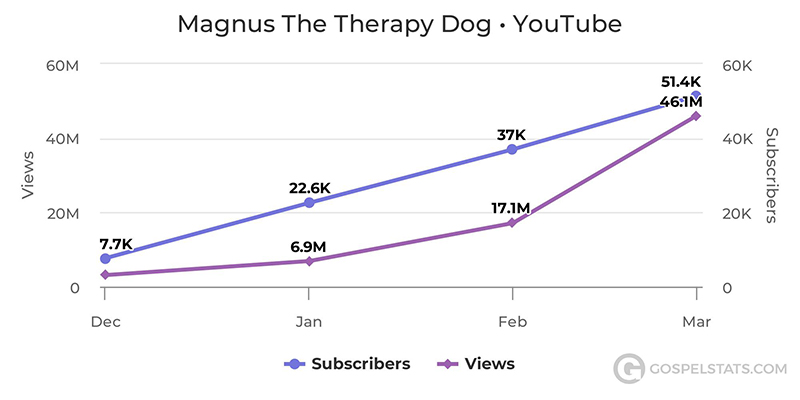 Tubefilter: Tell us a little about you and Magnus! How and why did you end up getting Magnus?

Brian Benson: Magnus is a five-year-old yellow Labrador who was originally bred and raised to become a service dog for the blind, but like a lot of people, Magnus had a career change. He did not end up becoming a service dog, so I adopted him to become our family pet when he was a little over a year old. He fit perfectly into our family. I took three months off from work when I adopted Magnus so we could spend time not only training, but most importantly bonding and a developing a solid line of communication. This strong foundation has been the bedrock of what makes Magnus such an amazing therapy dog.

BB: Where service dogs and emotional support animals provide help to their respective owner/handler, therapy dogs provide help and service to others. Therapy dogs can have a huge impact on a person’s life by providing both psychological and physiological assistance. Animals have a way to reduce people’s stresses, fears, and anxieties in a way that is hard to describe.

From the moment I brought Magnus home and I saw the way he interacted with my two young daughters, I realized he was different. It’s easy to teach a dog to sit, stay, down, etcetera. However, the one thing that you cannot teach a dog is empathy. This is where Magnus really shines. He has a natural ability to read people and understand what they need. Everyone who encounters Magnus cannot help smiling and feeling relaxed. He has a calming nature about him that relieves any stress or anxiety.

After much research, I found a reputable organization in my area that offers therapy dog certification courses. Magnus was first evaluated by one of their master trainers to see if he would even qualify to be in the program. After passing that with ease, Magnus and I then completed a six-week certification course that now allows us to visit various places that need pet therapy teams.

Magnus and I mainly focus on hospitals and schools. In the hospitals, we visit both terminally and critically ill children and adults. We also visit with their grieving family members and the overworked hospital staff who care for them. In addition, we also visit with student of all ages, with a focus on students who have emotional issues or learning disabilities.

Tubefilter: Your channel has recently seen a noticeable boost in subscribers. Do you know which video or event triggered this increase?

BB: I’m honestly not sure if a single video or group of videos have been the reason for our rapid growth on YouTube. I hope the growth is due to the fact that people really connect with Magnus, and that through our videos, he accomplishes what he does on an in-person visit–which is to make people happy and smile!

Tubefilter: How, why, and when did you decide to start making YouTube content? Why do you focus mostly on Shorts videos?

BB: When COVID hit, all in-person therapy visits were permanently put on hold due to health and safety concerns for both the people we would visit and for the handlers as well. This forced us to find alternative and unconventional ways to reach people and comfort them.

This is why we decided to start social media accounts on all of the major platforms–YouTube, Instagram, TikTok, and Facebook. This allowed us to reach a huge audience of people in need; people who were depressed, in pain, and feeling lost. The short form content seemed to be the best way to capture peoples attention and provide a lighthearted, comedic burst that they seemed to really need in order to lift their spirits.

BB: The recent surge in engagement has only motivated me to create more content. I get messages from people around the world every day saying that our content has really help them through some very dark times. This is exactly why we want to keep doing this: to comfort people and help them during their time of need. As long as the response to our content is positive and people keep wanting more, we will keep producing videos.

BB: The positive responses and the messages we receive actually make all of the long hours and hard work worth it. All we ever wanted to do was help others and this has become our way to pay it forward and try to do good in the world.

BB: We actually starting our first account on Instagram. After that, we expanded to TikTok, Facebook, YouTube, and eventually Triller and Dubsmash. We realize that each platform caters to a different audience, so it is necessary to cast a wider net in order to reach and help as many people as possible.

Tubefilter: What’s next for you and your channel? Do you plan to expand to longer-form videos?

BB: We have considered expanding into some longer-form videos. A lot will stay within the comedy area; others may cater to dog training tips and advice (which we get requests for a lot), others may be more behind the scenes of Magnus’ day-to-day life.