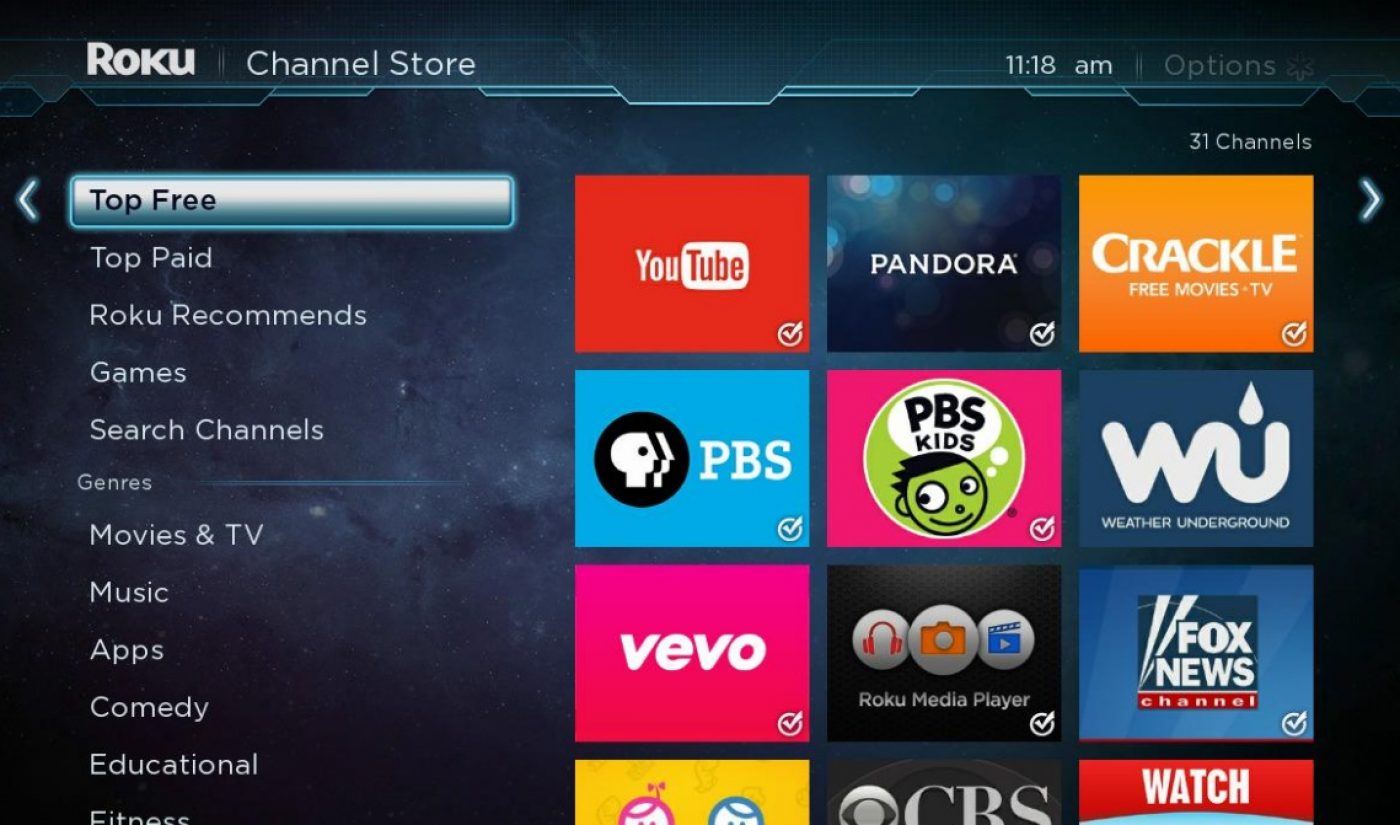 Whatever world-conquering juice the executives at Roku are drinking these days, I want some of that. The little indie known for dirt-cheap streaming sticks, dongles, and pucks with a slick interface has turned into a budding superpower, strong-arming Hollywood studios, scooping up millions of new customers, and perhaps venturing into original content.

I mean, who do they think they are? Apple? Google? Amazon?

Those three gigantic companies, each with market capitalizations of more than $1 trillion, all make devices that directly compete with Roku, whose market cap tops a considerably more modest $43 billion. Roku also competes with proprietary streaming interfaces in Samsung and Vizio connected TVs.

That the company is powering through all that very big competition is a testament to the devices and dead-simple interface that have made Roku the most popular streaming video delivery system in the United States.

The big brag came this week, when Roku announced it has 51.2 million active accounts, up 14 million from a year earlier, or nearly 38%. Even better for a company that makes a lot of money from advertising, watch time is up 55%, to 58.7 billion hours in 2020.

The company’s ad-supported Roku Channel has been a hit during the pandemic, reaching an estimated 61.8 million viewers in 2020.

It’s a misnomer to call it just a “channel,” however, because the Roku Channel is more like free, ad-supported services such as Tubi, Xumo, and Pluto (all of which are carried on Roku). Like them, the Roku Channel aggregates dozens of linear and live services, movies, older TV shows, news and more, connects viewer with their subscription services, and makes high margins on the ads and subscription fees it generates. And like those competitors (all of which are available on Roku), the Roku Channel has become a popular pandemic destination for locked-down, lean-back audiences looking for free shows in an accessible, easy-to-watch format.

Shares jumped nearly 11% on Thursday (and are up around two-thirds over the past three months) after delivering better-than-expected numbers on key metrics.

In response, Needham analyst Laura Martin upped her price target from $315 to $400, writing to clients, “What’s clear to us from 2020 is that ROKU has won the streaming wars in the US. Its (connected-TV) focus, platform competitive advantages, moats and execution excellence all suggest to us that ROKU will continue to take market share in 2021.”

Not at all incidentally, last week Amazon said its competing Fire platform had crossed the 50 million account mark. Together, the two companies’ streaming devices can be found in the overwhelming majority of the 110 million or so U.S. households, which gives them tremendous leverage in dealing with the sudden explosion of streaming services from big Hollywood studios.

That burgeoning leverage, and willingness to use it, was made explicit when Roku (and Amazon) refused for much of 2020 to carry HBO Max and Peacock, from two of Hollywood’s biggest media companies. Who says content is king?

In part, those standoffs were because Roku wanted the right to use some high-quality Peacock and HBO Max programming on the Roku Channel, while the streamers didn’t want to give away any of their premium content. But Roku held firm, and eventually got deals closer to what it wanted.

It’s a mark of the shifting power balances in Hollywood that, when the stalemates were resolved, Wall Street investors saw it as a Roku win, but also one for HBO Max and Peacock, which could finally begin extending subscriber reach that had been strangled during the standoff.

And then there’s today’s news that Roku has acquired the library of content accumulated by Quibi during that streaming startup’s brief existence. No word yet on what that library is worth, but Quibi spent a big chunk of its $1.75 billion in funding on dozens of premium shows from big names, creating at least some worthy programming.

A Quibi deal might be a good acquisition for Roku, providing a nice library of content that it actually, for once, owns. But that endorsement comes with some serious caveats:

Positioned for the streaming decade

Roku is in a good position for the moment, and knows it.

“The world is moving to streaming and we look forward to continuing to help viewers, advertisers, content publishers, and TV manufacturers succeed in the Streaming Decade,” Roku CEO Anthony Wood said in a statement announcing the company’s latest results this week.

I suspect streaming video, and the companies that deliver it to consumers, will be a big deal for longer than just a decade.

But at the rate things are going, perhaps it’s possible that by 2031, we’ll be watching our virtualized, multidimensional, gameified moving-image digital entertainment through interocular contact lenses provided by AppleSoftOogleZonViaCasTT, the entertainment/tech/social-media consortium acquired by Roku in 2028.