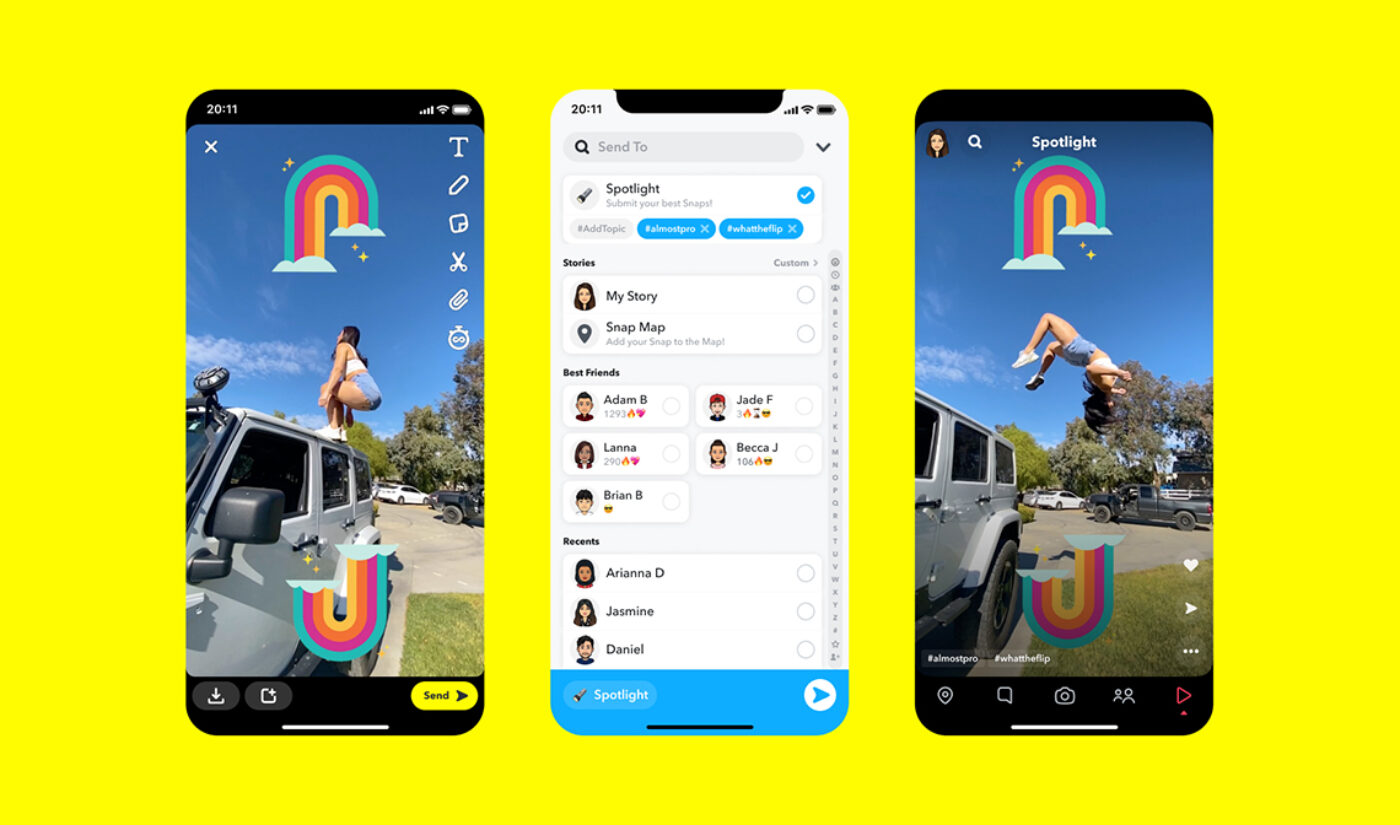 Snapchat has launched its own short video platform—and will distribute $1 million per day to creators of top-viewed content.

Spotlight, now the fifth tab on Snapchat’s recently redesigned home page, will surface “the most entertaining Snaps from the Snapchat community all in one place,” parent company Snap says. The tab isn’t like YouTube’s Trending page or Instagram’s Discover; content isn’t scraped automatically or algorithmically from across Snapchat. Instead, users have to manually submit their video Snaps by selecting Spotlight in the “Send To” menu, and Snap’s content moderators screen each submission before allowing it to appear on the tab.

Videos within Spotlight are ranked by a proprietary formula that predominantly takes it account total number of unique views, as well as average watch time and number of likes. The higher a video’s rank, the greater chance it has to earn money for its creator: Snapchat will divvy up the $1 million per day amongst an undisclosed number of “top” videos, a Snap spokesperson tells Tubefilter. Creators will receive a share of the money proportional to how many views their video(s) generated, and top creators each day will see very significant earnings, the spokesperson said.

To qualify for payment, creators must be over the age of 16, and–at least for now–must be located in the U.S., U.K., Canada, Australia, New Zealand, Norway, Sweden, Denmark, Germany, or France. The program will run through the end of 2020, a Snap spokesperson said, and potentially beyond.

In a statement, Snap emphasized that creators “don’t have to be a celebrity, influencer, or public figure” to earn money on Spotlight. “We want to make Spotlight fair and fun,” it said.

On the viewer side, Spotlight will serve videos to users based on their interests, and will aim to serve local content when it can, Snap says. As for how often content on Spotlight will rotate, Snap says that submitted videos will remain live within the tab until creators choose to delete them, meaning a video could go viral and earn payout at any time after publication.

Snap says a key reason it created Spotlight is because it saw Snapchatters publicly posting their videos to other platforms–such as, perhaps, TikTok.

Those who have been following Snapchat’s developments will know that Spotlight is just the latest in a series of moves Snapchat has made to expand beyond its ephemeral private-messaging origins and toward being a TikTok competitor. Over the past few months, it’s launched permanent public user profiles and given folks a way to share links to original programming off-platform. Finally, just last week, it acquired Voisey, a U.K.-based startup whose titular app lets users make custom songs and soundbites with a variety of vocal effects.