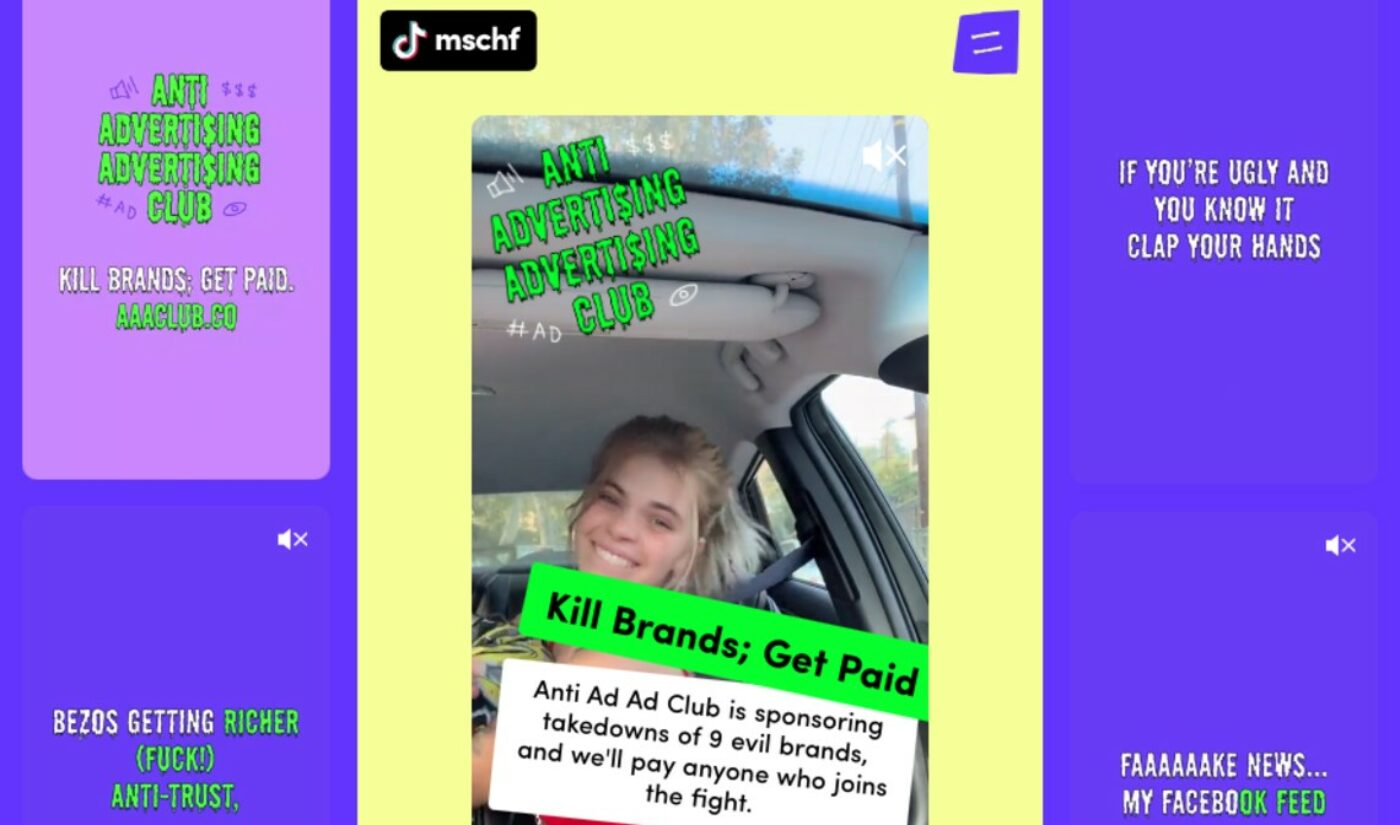 MSCHF, a Brooklyn-based startup that describes itself as the “Banksy of the internet” — and which launches bizarrely compelling products every second and fourth Monday of the month — has unveiled its latest drop, squarely targeting the influencer set while providing larger commentary on influencer culture.

The company’s new Anti Advertising Advertising Club consists of nine songs made for TikTok that are designed to take jabs at what it has termed “evil” brands — including TikTok itself, Fashion Nova, Amazon, the NFL, Tesla, Facebook, Purdue Pharma, Comcast, and Palantir, according to MSCHF.

The TikTok track, for instance, is titled “If Ur Ugly And U Kno It” and references the notion that the platform has allegedly suppressed content from unattractive users. Per the Anti Advertising Advertising Club, the other songs satirize allegations that: Fashion Nova steals designs and uses sweatshops, Amazon violates human rights and busts unions, the NFL disregards player safety, Tesla is negligent about the health of its own employees, Facebook proliferates hate speech and fake news, and Purdue Pharma has profiteered off of the opioid crisis. Other songs are aimed at Comcast and Palantir.

In order to participate, anyone is invited to create TikToks using the above tracks, which can be accessed on the Club’s website. In order to get paid, creators must hit viewership thresholds — which vary from brand to brand and track to track — provide proof of their identity, and then cash out.

The reward tiers range from $10 (to anyone who can get at least 5,000 views using the TikTok track) to $20,000 if a user can get 10 million views using the Palantir song, titled “Theyre Watchin You” (which will only be paid out one time). As for the other prizes being furnished on an unlimited basis, MSCHF says it doesn’t know how long it plans to run the campaign, so “if you’re serious about claiming some bounties, we’d suggest posting quickly.”

“We’ve gone from no one wanting to sell out to everyone wanting to sell out,” reads the campaign’s manifesto, which likens the concept of being an influencer to hawking “cheap, direct-to-landfill products” as a means of seeking approval. “If every user’s desire is to sell out, we’ll happily enable that impulse if it means we can punch at the companies doing the buying.”

Previous MSCHF collaborations include Jesus Shoes (or customized Nikes with holy water from the Jordan River embedded in the soles), Cuss Collar (that curses at your dog whenever it barks), and a mobile game collaboration with YouTube star MrBeast, which challenged participants to hold their fingers against their phone screens for as long as possible, and which ultimately handed out $20,000 apiece to four winners.