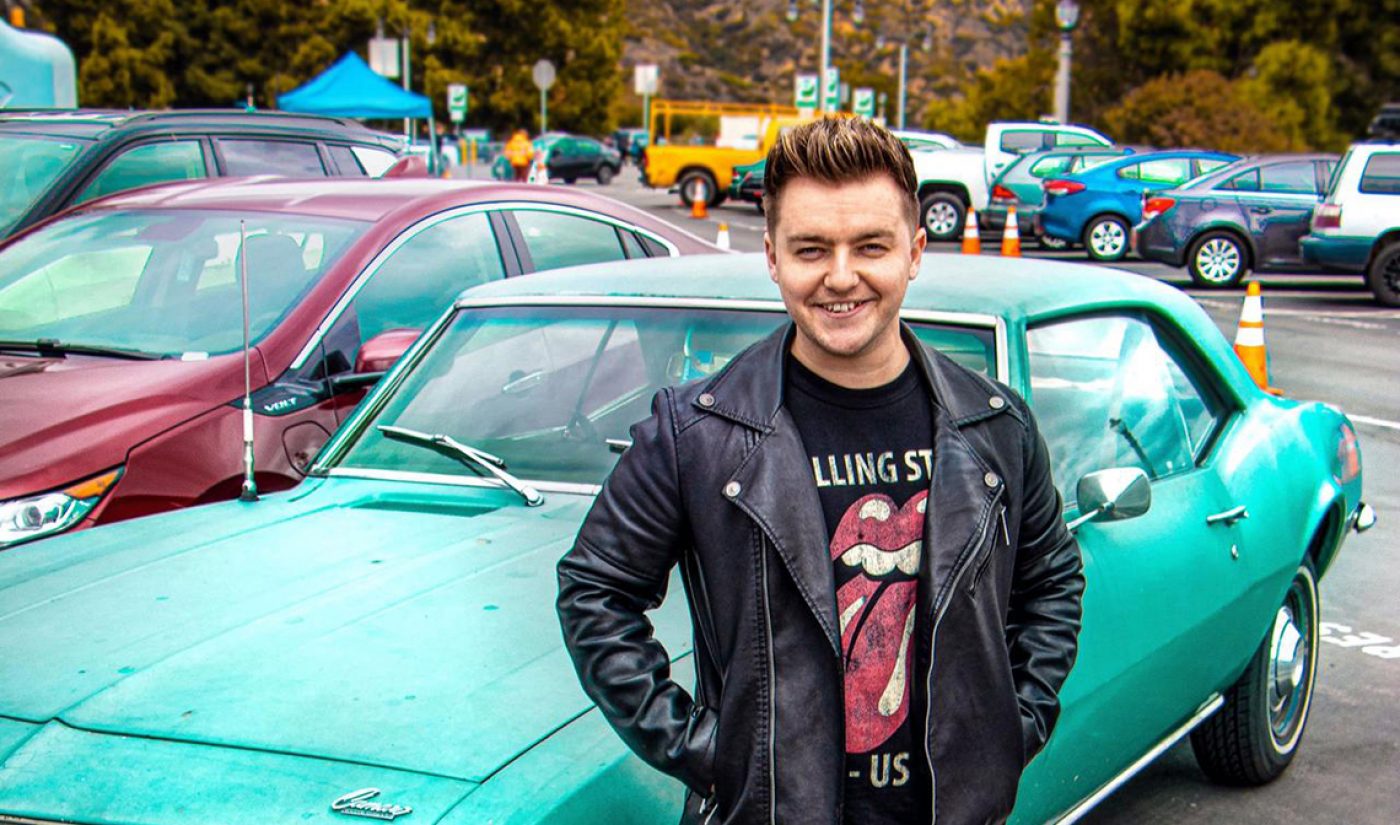 Cameraman Carl loves a good prank. The setups, the jump scares, the screams—it’s all what he lives for. For him, the only tough thing about it is figuring out how to condense all of that, from prep to punchline, into one 15-second TikTok video.

Carl originally started pulling pranks to entertain himself at the auto supply store where he worked full-time. He’s a filmmaker by trade, having attended Bridgend College for an honors degree in production. But after he graduated, he couldn’t find a local position in the industry, so he “ended up giving up on that dream” and resigning himself to a day job, he says.

Oddly enough, though, it turned out that day job was his path to filmmaking: One of his customers turned out to be a local social media star known for their pranks, and after learning about Carl’s passion for film, they asked him to come work for them. He didn’t know much about social media, but he knew what to do behind a camera—and thus, he became “Cameraman Carl.”

TikTok (in the form of its former competitor app Musical.ly) entered the scene in 2017, when Carl—still a cameraman—met one of its top stars, Houssein, during a tour. Carl downloaded the app, browsed around, then made a casual comedy video featuring one of his friends. To his surprise, the video racked up more than a million views, and his account began to accumulate followers.

These days, Carl’s no longer grudgingly working a day job, and the only camera he holds is his smartphone. He now has more than one million followers on TikTok, and is set to make his first appearance as a featured creator later this year at U.K. convention TokFEST.

Carl: It’s truly amazing! It’s still quite surreal to think of, but I’m so grateful for everyone who’s been a part of this journey so far, and I hope you stick around for many more years to come!

Carl: I’m 27, and I’m from Bridgend in South Wales. I’ve lived here my whole life; it’s a small town with a lot of characters, which is great for doing public videos! When I was a teenager, I borrowed my brother’s old MacBook and one day decided to edit an action-packed film trailer that consisted of scenes from movies like Bad Boys and James Bond. It turned out pretty good, considering I’d never done anything like that before! From that moment, I knew I wanted to have a career in video production of some sort.

After I left school, I was working part-time in Halford’s whilst studying film and video in Bridgend College, which allowed me to achieve a bachelor of honours degree in film and video production. There’s never been much TV or film work around here, so I ended up partly giving up on that dream and went full-time in Halford’s a few months after graduating. Then, one day, one of my customers happened to be a local social media star who was a prankster, and he offered me a job as a videographer and editor. I jumped at the chance, even though I knew nothing about social media!

I worked hard to learn and perfect my craft–most of the time I was working 60 to 80-hour weeks! But I was fortunate enough to build a following from doing that job, and it allowed me to leave and focus on doing my own social media full-time earlier this year!

Carl: I found out about TikTok when it was originally called Musical.ly. We did a U.K. comedy tour in 2017, and our support act was one of Musical.ly’s biggest stars, Houssein. He introduced us to the app, and I downloaded it after our tour ended and started making videos outside of work with my friends just for fun. It all just sort of took off from there!

Carl: My first video went viral! It was just a simple comedy sketch about “when one door closes, another door opens,” and when I opened the door, my friend Jake was sitting on the toilet! (Sorry about that, Jake!) It racked up 1.2 million views, and I was blown away! Since then, I’ve been lucky enough to have a number of viral videos doing comedy sketches and pranks that have helped me grow steadily over time. My biggest video to date was when we were having a meeting in Starbucks–Jake went to the toilet, and I quickly set his laptop to play explicit noises when he opened it. His face was brilliant, customers were shocked, and you can even hear an employee shout “Oh my god!” in the background. I love making videos like that!

Carl: I think TikTok gives anyone a fair chance to shine. Sure, you have established influencers like David Dobrik, Addison Rae, Logan Paul, and Zach King on there, but it also gives you or your siblings or your neighbours the opportunity to go viral, and that really encourages people to give the app a try.

Plus, I think the range of content you can find on TikTok is one of its unique traits. You can go from watching comedy videos to informative videos, fitness videos, life hacks, and even videos with mental health tips and tricks. The sheer variety means you never really know what you’re going to stumble upon next on the For You page, and that makes the app quite addictive!

Carl: I’ve mostly worked with just friends so far, but I’d love to collaborate with other creators in the future, when it’s safe to do so. The pandemic has really made collaborations a difficult thing to set up–everyone’s concerned about safety, and rightfully so! Plus, Wales is known for its truly terrible weather, so meeting outside is easier said than done! In terms of brands, I’ve been lucky enough to work with BoohooMAN and the BRITs so far. Hopefully many more in the future, though!

Carl: I spend more time than I care to admit scrolling through the For You page! I know I’m not alone on that one, because there’s no such thing as a “quick browse” on TikTok! I try not to spend too much time brainstorming content, I prefer that if an idea comes to me, I’ll go just and film it. I think when you say to yourself, “I have to think of/make content today!” it can put real pressure on you and it becomes less fun. I prefer it when my ideas are more organic and spur-of-the-moment, and I think my audience prefers that too.

Carl: I love watching creators like Woody and Kleiny and their crew. Zach King does insane visual effects! Dr. Julie Smith is a wonderful creator, she gives out free mental health tips every day and she’s helping so many people who don’t have access to professional help. There’s all of the U.K. creators who work hard every day to keep striving forward. There’s too many to name!

Tubefilter: What made you fall in love with pranks? How did you know that they were your “thing”?

Carl: I’ve been pulling pranks since I was working in Halford’s. Being short meant I could fit into fun places like on storage shelves or inside delivery boxes. I still have an old video of me hiding in a box and jumping out to scare my colleagues! So making pranks and even going on to film and edit for a prankster was just a natural fit for me. I just love to make people laugh! I’ll always refer back to a quote I heard in an old Ryan Reynolds movie called Van Wilder: “You should never take life too seriously, you’ll never get out alive!” And it’s true! So let’s just have fun while we’re here!

Tubefilter: What’s your favourite prank you ever pulled?

Carl: It has to be the mannequin scare I did to Patricia, our cleaner in my old job! I’d just come back to work after a long period off due to a broken ankle, and I was still hobbling around a bit…No one thought I was in any state to be pulling any pranks yet! So I’d found an old morph suit in my house and we had a photography studio downstairs in our office with mannequins sitting on chairs. I sat down next to the mannequins in my morph suit, pulled a pose, and got one of the boys to bring her down to help him move something. She had the fright of her life! I believe that’s the first and only time I’ve heard her swear, too! It was hilarious, and by far my favourite video I’ve made so far.

@cameramancarlBought @the_j.man a brand new pair of Yeezy’s… or so he thought 👀😂 … what would you do?

Tubefilter: What makes TikTok a particularly good fit for your prank content?

Carl: There’s so much comedy on TikTok, and viewers love pranks! TikTok loves short, sharp content, so for me, it’s a challenge to get a story, the setup, and a punchline into around 15 seconds. Plus, as a viewer, you don’t mind watching a hilarious 15-second video over and over again!

Carl: I plan to take things a day at a time, to keep making more content that people love on TikTok, and continue to grow and spread laughter. I’ve also recently started a YouTube channel that I’m so excited to grow. I’ve managed to get to nearly 30,000 subscribers in four months, which is amazing! It’s longer, story-based comedy content with a prank or two thrown in here and there! Then, later this year, I’m set to be a featured creator at TokFEST, which is my first big social media event. Hopefully in the future I can do TV-related projects and possibly release merch later this year, too!