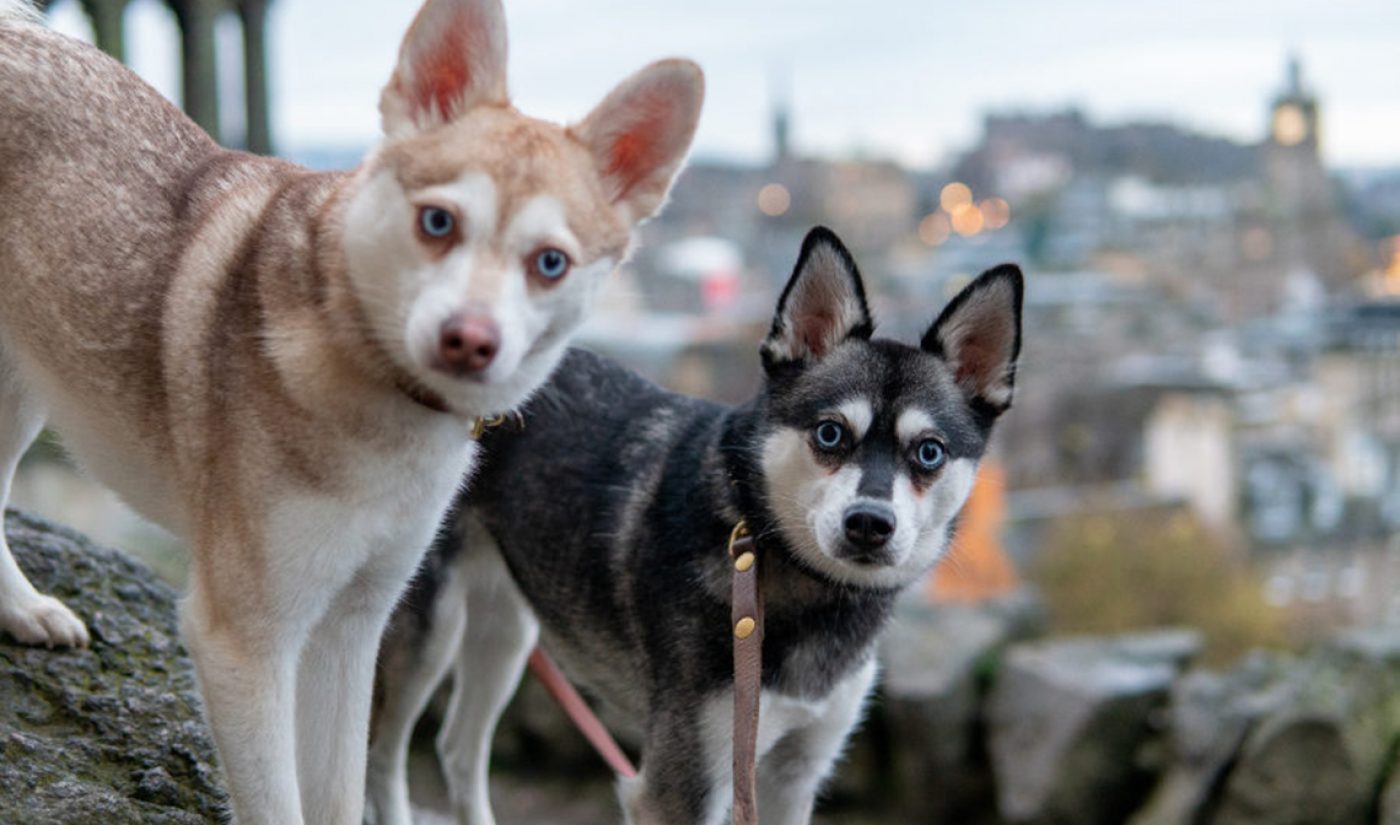 We all know the internet loves cats, but TikTok family LifeWithKleeKai shows that web denizens can be just as enthusiastic about canine companions.

Today’s Millionaire account belongs to two fetching (sorry) dogs, Copper and Skye, and is run by their parents, Yasmin and Kieran. At first glance, you might think Copper and Skye are Siberian Huskies or Malamutes, but they’re actually Alaskan Klee Kai dogs, which are much, much smaller than their sled-pulling brethren. But as Skye and Copper are adept at demonstrating, Klee Kais share quite a few things with larger breeds, including distinctive vocalizations and a keen intelligence that lets them pick up lots of tricks.

Those tricks have come in handy on TikTok. Yasmin and Kieran have been on the platform for less than a year, but it didn’t take them long to get a pawhold on their ideal content niche: putting a pup’s twist on trends that are popular with TikTok’s human creators. In one of their recent videos (which you can see below), they used one of TikTok’s top-trending sounds–a version of “Le Festin” from Ratatouille, which TikTokers are using as a background for all kinds of food-related videos–and gave Copper a chance to “cook” for Skye, who hadn’t been eating as usual. They’ve also gotten Copper and Skye to get on those dance memes…sort of.

By hitting on these trends, the couple has been able to get LifeWithKleeKai up on TikTok’s Discover page numerous times–something Kieran says has played a key part in growing their audience to the 1.7 million followers they have today.

Kieran: When we hit one million followers, it was surreal. We had only been on the platform for a few months, and were still learning the ins and outs. Now, having been on TikTok for nearly a year, we are pushing on 2 million followers, and we are so grateful for every person who has followed along in Skye and Copper’s lives. Our TikTok community is so supportive and has shown us and our dogs so much love!

Tubefilter: Tell us a little about you! Where are you from?

Kieran: We are a husband-and-wife duo—Yasmin is originally from California, and Kieran is from the west of Ireland. We met in London, where we were both living at the time, and since then we’ve gotten married, moved to California for a few years, then recently made the move back to England.

Tubefilter: How did you meet and adopt Skye and Copper, and become such a fan of Klee Kai dogs?

Kieran: We met as many young couples do—through a dating app! We were both living in London at the time when we started dating. Yasmin had been introduced to the Klee Kai breed when she was quite young and had always wanted to get one once she had settled down. When she introduced me to the breed, I was smitten!

Tubefilter: How did you first find out about TikTok? What made you decide to join and start posting videos about your pups?

Kieran: We heard about TikTok when we were looking at an article predicting some of the big social media apps in 2019. We liked the idea of TikTok, having previously been fans of Vine. We signed up to the app, and soon after, TikTok U.K. reached out to us on Instagram to ask whether we’d like to receive a TikTok handbook in May 2019. Initially, we didn’t really focus on TikTok, but we started to create regular content around September 2019 and it has sort of snowballed from there.

Kieran: Like I said above, we didn’t really start to produce regular TikTok content until September last year. We started to create content around the hashtags on the TikTok Discover page. We were featured 5-10 times, which helped us get to around 80,000 followers. We filmed a video of us returning from a holiday in Morocco to reunite with our dogs. That video was the first time we got more than one million views. If I remember correctly, it grew our following from 80,000 to around 250,000.

After that, we continued to create content with a view to trying to get into the featured videos on the Discover page. In February and March, we had four or five videos that all got a couple of million each. One video in particular of Skye as a puppy has over 20 million views, and that elevated our following to over one million. We had another video of the dogs playing tic-tac-toe that’s got over 4 million. We were one of the first dogs to try the trend, and it’s since been used by TikTok for some of their ads on U.K. social media. That’s helped to grow our following, too. We get a couple of DMs a week on Instagram from users who have seen the TikTok ad with Skye and Copper.

Kieran: TikTok is such a creative platform. From our personal experience, the content on TikTok is much more relatable, unfiltered, and incredibly creative. It’s the one app that keeps inspiring us to create. I think the creativity and candidness of the creators on the app is what keeps viewers coming back! We’ve started to see a lot of trends being created on TikTok and then taken to Instagram and Facebook with huge engagement rates. It’s a lot less superficial than other social media platforms, and a lot more inclusive, which is so refreshing in the age of social media.

Kieran: I’m fortunate to work from home, so I get to spend a lot of time with Copper and Skye. I co-founded a sports website called thesportreview.com in 2008. In 2019, we launched a new dedicated pet website called hellobark.com, which features Copper and Skye. While I’ve covered the Alaskan Klee Kai on my website, I’ve built a library of over 650 articles covering topics ranging from different dog breeds, reviews of pet products, advice from experts, as well as a social stars section. Within the social stars section, I’ve had the opportunity to interview some of the biggest dog accounts on Instagram and TikTok. We’ve gone on to build friendships and relationships with some of the dog accounts that I’ve interviewed.

We’ve also done quite a few brand sponsorships on TikTok now that it’s being taken more seriously by brands, and have some exciting ones in the works! Having seen Life With Klee Kai grow to 1.7m, I still find it interesting to learn what works for other accounts and what inspires them to create content.

Kieran: My average day usually involves getting up around five to walk Copper and Skye before I work on The Sport Review for a couple of hours. The rest of my working morning/afternoon is dedicated to building out the content on my helloBARK! website. In the afternoon, we focus on filming a couple of TikTok ideas or creating content for our YouTube. We usually brainstorm content for half an hour every day, and scroll through FYP to see what sounds are trending or general trends. It’s hard to predict what works best for us; sometimes it’s a cute dog challenge, or it could be a viral sound. Our followers do seem to like when Mom or Dad feature. It’s all down to some experimentation, really.

Kieran: There are loads of dog accounts we enjoy following. There are a number of different approaches to TikTok content for pets. You have accounts that like to tell a story, such as ScottyHubs aka Scott and Gracie, or 1Jolly1 aka Puddin and Doser. There are other accounts, like Shaq the Pug, that do interactive content, really engaging their following. There’s Doby and Blue, who come up with lots of videos to show off their range of tricks. We’re a bit of a mix of everything, we haven’t really settled on one niche because we enjoy trying different trends. Of the other accounts that seem to experiment with a bit of everything, we like Mini Doodle Bentley, Lola the GSD, Ollie and Butler, and Mocha Pom.

Tubefilter: Your dogs are obviously very smart. How did you come up with the idea to involve them in comedy skits? Are there ever challenges to working with them (and getting them to work with you)?

Kieran: We like spotting human trends on TikTok that we can attempt with Skye and Copper. The breed in general can be quite stubborn, but for the most part, they are really good when it comes to filming. We like to utilize their training and personality traits (Copper’s howling on demand and Skye’s sass). Sometimes they’ll do something really cute or funny that will change the direction of our initial idea—but that’s the beauty of animals! You can never predict what they’re going to do next!

Kieran: With everything going on in the world, our aim is to keep putting smiles on people’s faces through our videos. With COVID-19, we are unsure of what the future looks like or what our new normal will be like. Our biggest hope is that we can one day soon be reunited with our families.