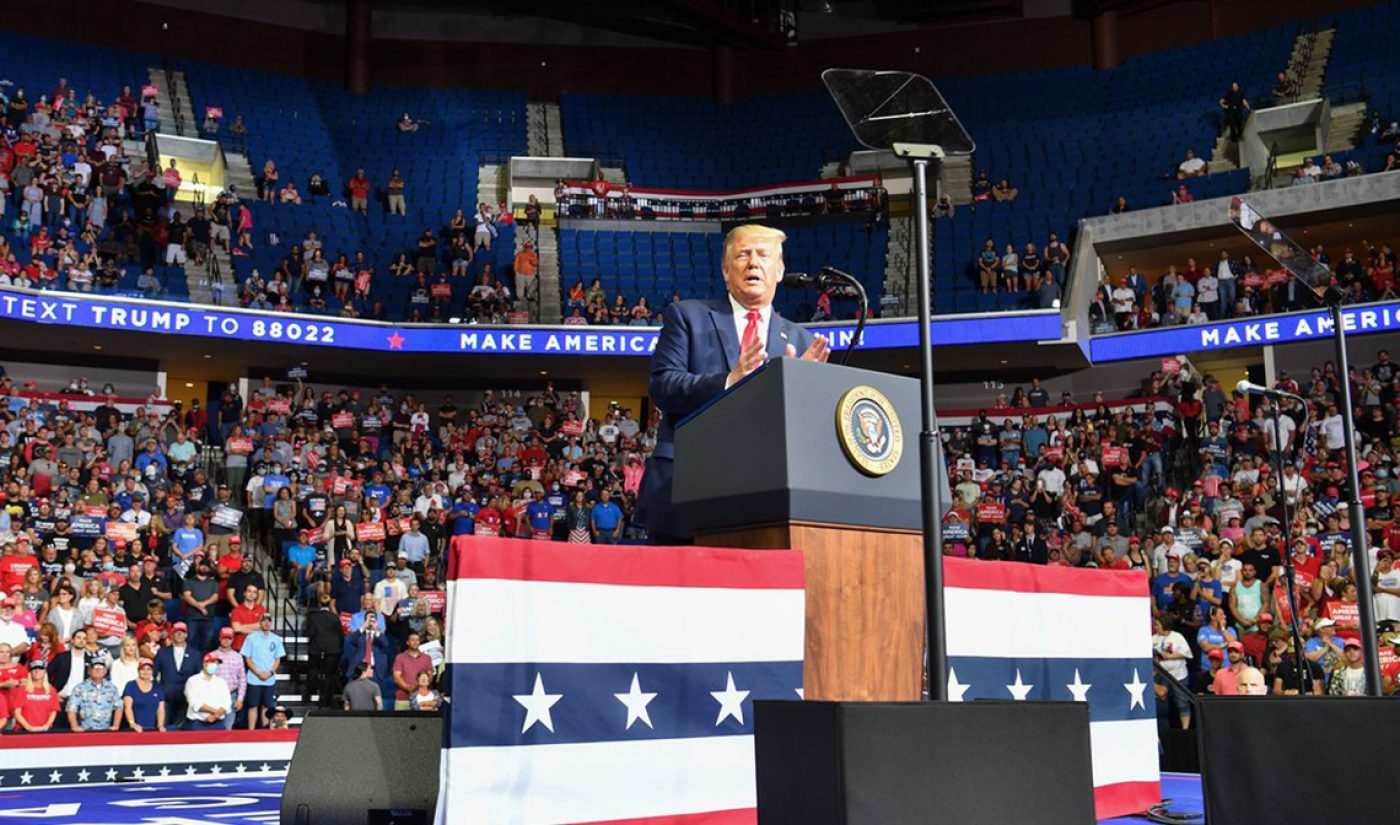 Eight months after launching his Twitch channel, Donald Trump has been temporarily banned from the platform for violating its policies against hateful conduct.

According to The Verge, which first reported the ban, Twitch found multiple videos in violation. Those videos included a rebroadcast of Trump’s notorious 2015 campaign kickoff speech, where he claimed Mexico was only “sending” immigrants who were rapists and involved in drugs, and racist comments from his recent rally in Tulsa, where he referred to COVID-19 as “Kung Flu.”

The flagged videos have all been removed, Twitch told The Verge. A spokesperson added, “Like anyone else, politicians on Twitch must adhere to our Terms of Service and Community Guidelines. We do not make exceptions for political or newsworthy content, and will take action on content reported to us that violates our rules.”

The platform did not say exactly how long the ban will be. For now, those who try to access Trump’s channel–which is mainly a repository for videos of his rallies–are served a blank page with a notice reading, “Sorry. Unless you’ve got a time machine, that content is unavailable.”

Trump’s suspension arrives days after Twitch said it was reviewing its hateful conduct and harassment policies, something it’s doing in response to a wave of sexual misconduct allegations against streamers and one company executive. In an official blog post, the company said it was “committed to continuing our efforts to make Twitch a safer environment with more tools to combat harassment and hate.”

Along with reviewing its policies, Twitch is amping up its banned words list, its automatic offensive user name detection, and is working on “other projects focused on reducing harassment and hateful conduct,” it explained.

Its decision not to exempt politicians from policies goes directly against Facebook CEO Mark Zuckerberg‘s recent, contentious choice not to take any action on posts from Trump that said “when the looting starts, the shooting starts,” and threatened to use “vicious dogs” and “ominous weapons” against protesters in the wake of George Floyd‘s death. Its position is more in line with that of Snapchat (which recently elected to stop promoting Trump’s content on its Discover tab) and Twitter (which added fact-checking information to Trump’s misleading tweets about mail-in voting and limited visibility of tweets about protesters).

In related news, Reddit has come through on its promise to update its own hate and harassment policies–and one of the first things it’s done under the new rules is terminate r/The_Donald, along with around 2,000 other communities in violation of new policies.

r/The_Donald is not affiliated with Trump; it was founded at the start of his presidential run in 2015 as a gathering place for supporters. The subreddit has since become infamous: in 2018, the Southern Poverty Law Center published an extensive report about racist content in the community, and in 2019, it was notably blocked from Reddit search results and stripped of the ability to run ads.

“All communities on Reddit must abide by our content policy in good faith,” Reddit cofounder and CEO Steve Huffman wrote in an official post. “We banned r/The_Donald because it has not done so, despite every opportunity. The community has consistently hosted and upvoted more rule-breaking content than average, antagonized us and other communities, and its mods have refused to meet our most basic expectations. Until now, we’ve worked in good faith to help them preserve the community as a space for its users—through warnings, mod changes, quarantining, and more.”

He added, “To be clear, views across the political spectrum are allowed on Reddit—but all communities must work within our policies and do so in good faith, without exception.”