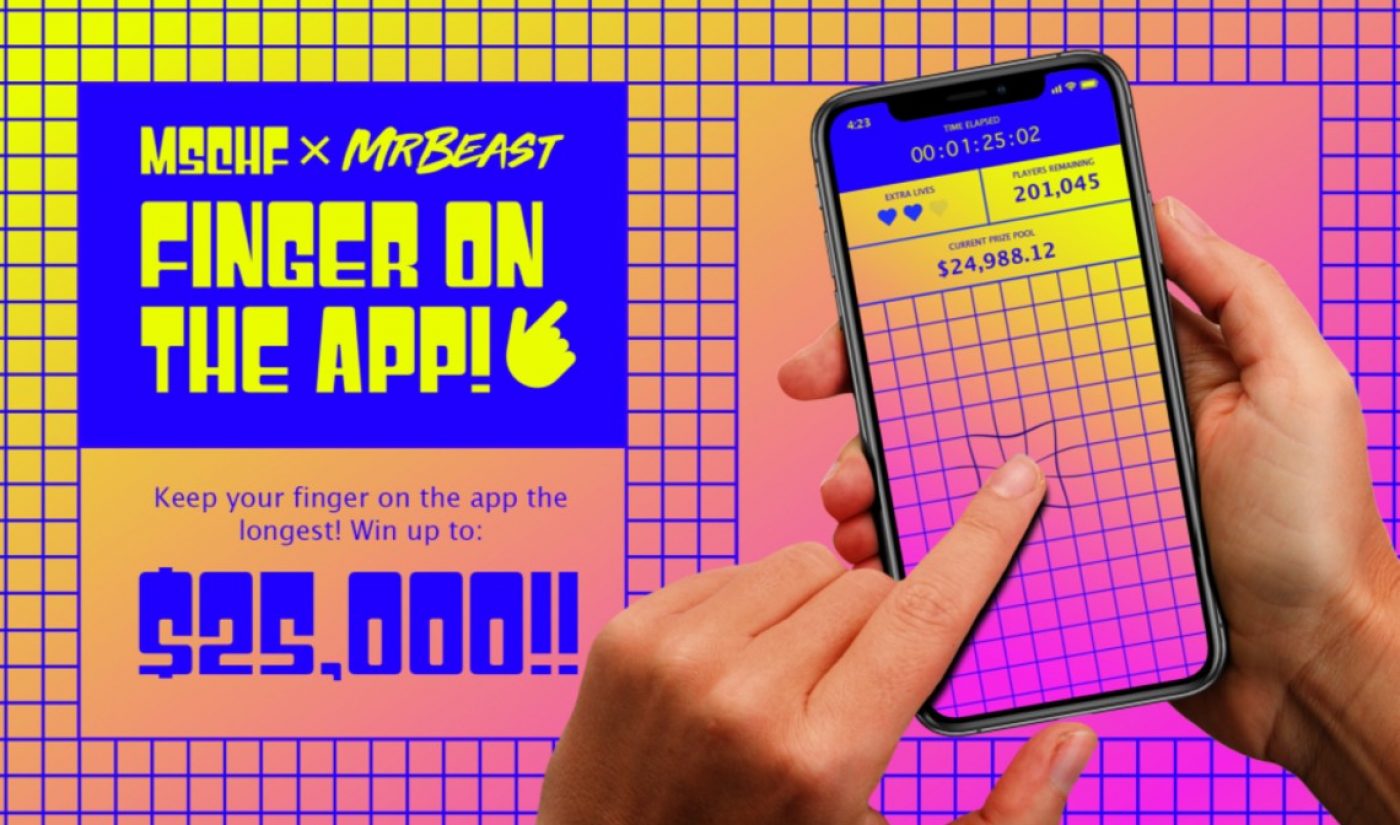 YouTube stalwart MrBeast, whose real name is Jimmy Donaldson, is teaming up with the self-described “Banksy of the internet” product startup MSCHF on a clever mobile game concept that nods to the compellingly banal contests he hosts on his channel, touting big-ticket prizes.

Brooklyn-based MSCHF, launched by the entrepreneur Gabriel Whaley in 2016, drops interesting products for sale every second and fourth Tuesday of the month at 11 am ET. The company has raised $11.5 million in venture funding to date (having closed its latest $8.5 million round led by Canaan in 2019). Past launches have included, for instance, ‘Jesus Shoes‘ (or customized Nikes with holy water from the Jordan River embedded in the soles) and a ‘Cuss Collar’ (a dog collar that curses whenever your dog barks).

Given both Donaldson and MSCHF’s unique propensity for grabbing eyeballs, the two are teaming up on a mobile game called Finger On The App — a one-time, multiplayer game that’s exclusively available on iOS. The concept of the game is simple: participants will compete to hold a finger on their phone screens for the longest. The last participant to stop touching the app will take home a maximum of $25,000. (Prize winnings are not set in stone, however, as all defeated players will vote on the final amount, with the final tally being the average of all these votes).

Finger On The App, which marks MSCHF’s 24th total product drop to date, will go live on June 30 at 3 pm. That said, interested competitors can already download the app in the Apple app store. Screenshots show a grid where users must keep their fingers trained. The homepage also includes sections showcasing the ever-fluctuating prize pool, a tally of all the players who are still currently in the mix, and what appears to be the ability to purchase extra lives.

Daniel Greenberg, head of strategy and growth at MSCHF, tells Tubefilter that Finger On The App marks the startup’s first collab with a YouTuber. The team already had the app in the works, he said, and then became introduced to Donaldson via a mutual friend.

That said, Finger On The App marks the company’s second celebrity collab to date — the first being with rapper Future to stream a leaked track from his latest album on a dedicated website.

Donaldson has amassed a stunning 37 million subscribers on his YouTube channel and has recently been nabbing roughly 300 million monthly views. His most recent viral, YouTube-produced contest was a charitable and star-studded rock-paper-scissors game. And last year, Donaldson produced a series of ‘last to…” contest videos. That series culminated with a stunt where he placed $1 million in a large glass case, challenged four contestants to keep their hands on the case, with the last one standing taking home all of the money.