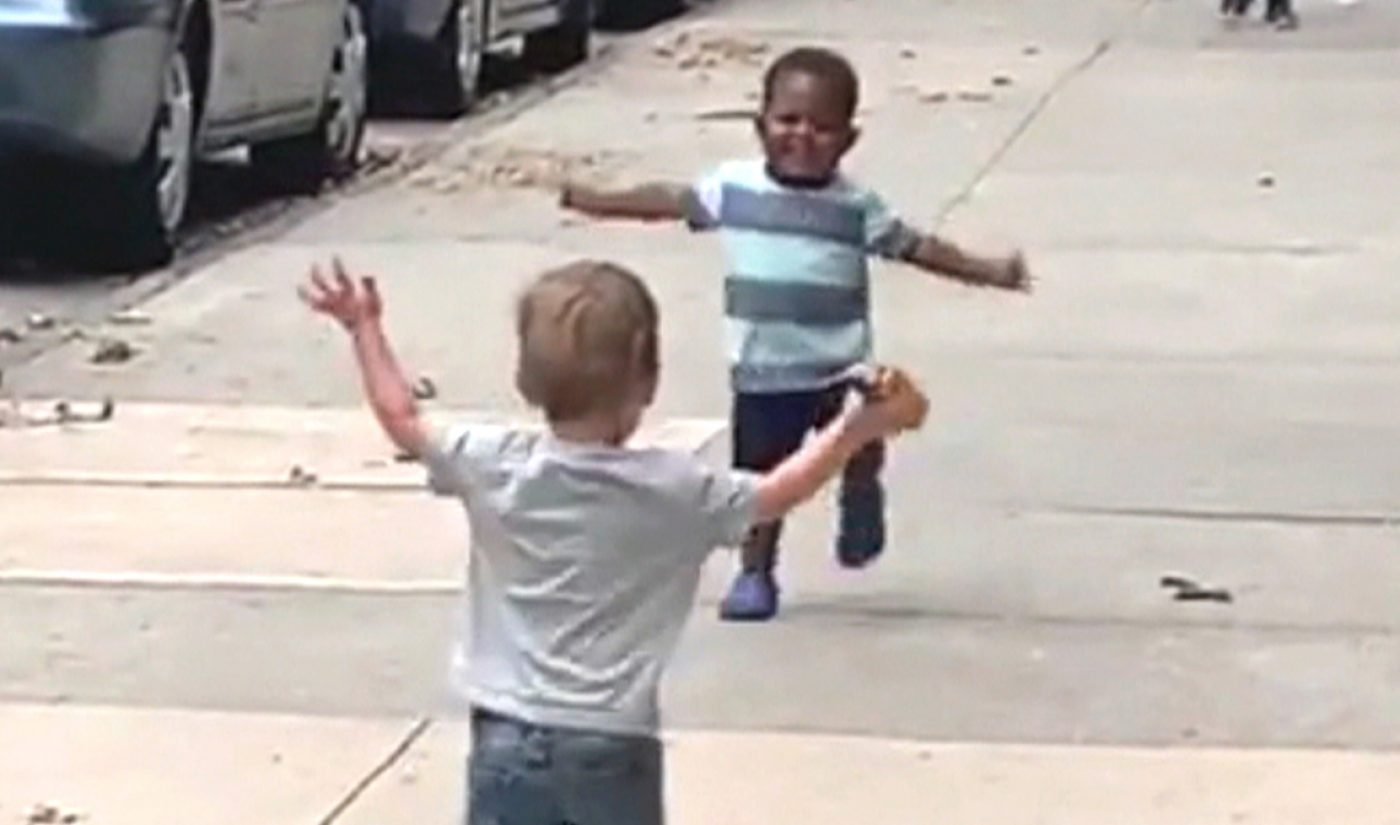 User-generated video giant Jukin Media was behind the takedown of a doctored video tweeted yesterday by Donald Trump.

The original video, which went viral last year, shows two toddlers–one Black and one white–happily embracing one another and playing on a New York sidewalk. Trump’s edited version first shows just the last few seconds of the video, where the boys’ backs are turned to the camera and the Black toddler is running in front of his white friend. “Terrified todler (sic) runs from racist baby,” a fake CNN chyron reads. The video then reframes the clip by backing up to show the two hugging and turning to run together with smiles on their faces. An overlay proclaims, “America is not the problem. Fake news is.”

The fabricated CNN chyron prompted Twitter to add a “Manipulated media” warning to Trump’s tweet. Users who click on the warning are taken to a Twitter Moment with information about how the “terrified todler” story was not real CNN coverage. This is the first time Twitter has added that specific note to a tweet of Trump’s, but not the first time it’s pointed out that he tweets false information.

Jukin Media has been partnered with the person who took the video since September 2019, it tells Tubefilter. Jukin manages content brands including FailArmy and The Pet Collective, and also helps people manage the rights to their viral content through things like licensing arrangements and cracking down on copyright infringement. And copyright infringement is exactly what Trump’s usage of the video constituted, it says.

“Neither the video owner nor Jukin Media gave the President permission to post the video, and after our review, we believe that his unauthorized usage of the content is a clear example of copyright infringement without valid fair use or other defense,” it explains.

Jukin filed a DMCA takedown request with Twitter earlier today. This afternoon, the platform pulled Trump’s video, replacing it with a notice: “This media has been disabled in response to a report by the copyright owner.” Facebook also removed a copy of the video posted by Trump, but Jukin Media did not confirm whether it filed a takedown notice with that platform.

Jukin adds that “in no way” does it or the video owner “support or condone the manipulated video or the message it conveys.” Michael Cisneros, father of one of the toddlers, separately voiced his disapproval on Facebook, writing, “He will not turn this loving, beautiful video to further his hate agenda.”

Trump has not publicly commented on the takedown. The apparent message of his doctored video, however–that people should hesitate before condemning racist behavior caught on camera–has been reiterated in a second clip posted last night. That video, featuring entirely original content, opens with a white man in a MAGA hat chasing a car down the street, yelling, “Go! Keep going, go!” A woman records the duo and posts the footage online, captioning it, “My racist neighbor just chased my BLACK Uber driver out of our neighorbood.”

Like with the stolen toddler video, this video backs up to show the situation in full: the Black driver drops off his passenger, then gets his car stuck in the snow. MAGA hat man jogs out and offers to help with a push. Their seemingly hateful exchange was really just the white man encouraging the Black driver to keep on the gas.

Jukin Media is far from alone in tagging Trump for using content without permission. Notably, a number of musicians–Queen, Elton John, Steven Tyler, Rihanna, Adele, Guns N’ Roses, Pharrell Williams, Neil Young, and The Rolling Stones, to name a few–have requested that Trump stop using their songs at his rallies.