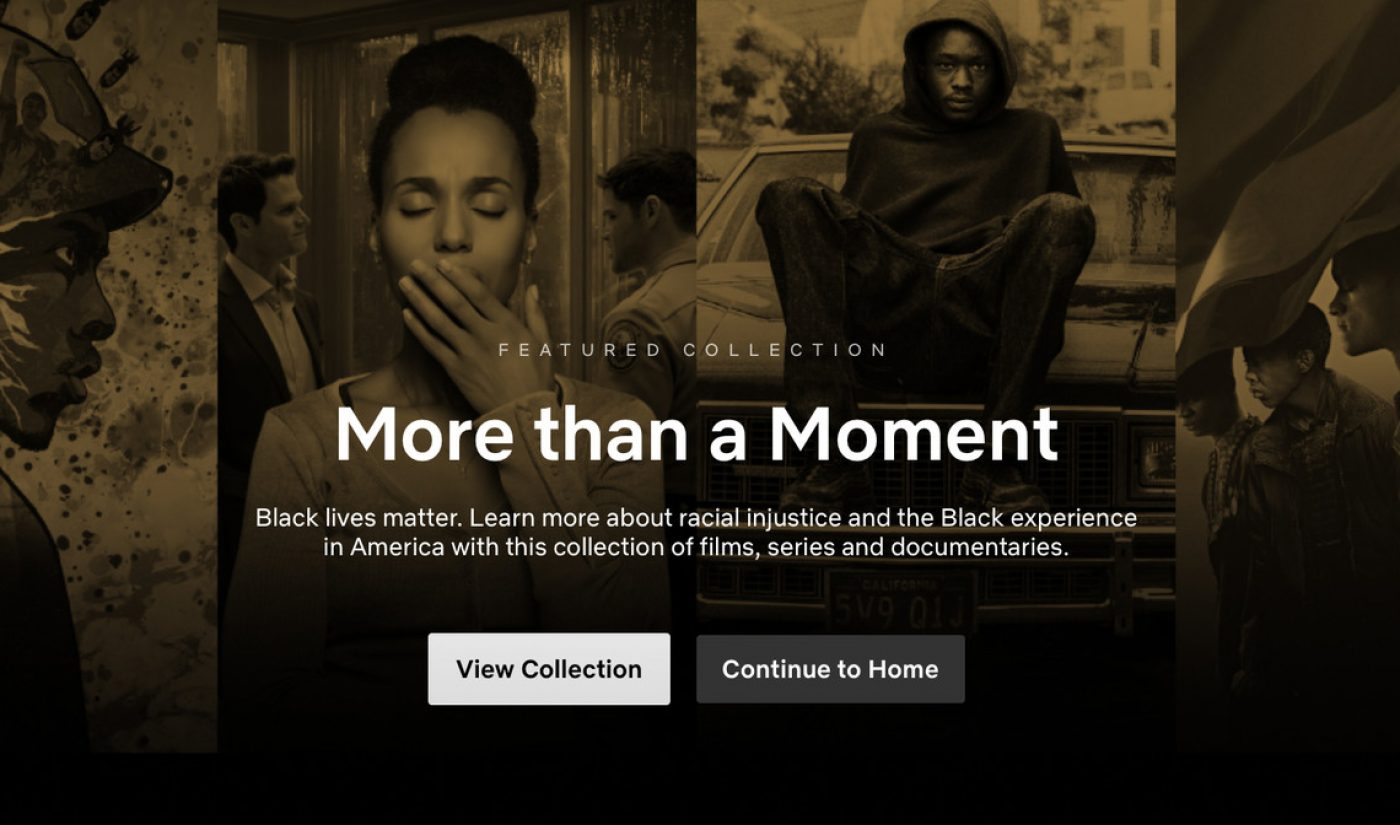 Amid the ongoing protests and fallout around police killings of unarmed African-Americans, numerous media and tech companies have been spotlighting content from Black creators and donating money to groups focused on minority issues.

Setting aside my hard-earned cynicism about the depth of commitment to action behind those kind words and contributions, there is some reason for hope this time. As with so many things happening in this insane year, the protests have proven to be an accelerant of slow-burning trends that have been building for years in media, entertainment, and just about everywhere else.

Most importantly, lots of companies are putting actual, moderately substantial dollars behind their words. As Cuba Gooding Jr.’s character declared so memorably in Jerry Maguire: “Show me the money.” They are, this time.

Importantly, those financial commitments also bring more institutional investment by Hollywood and tech companies in making sure actual positive outcomes will result. Finally, plenty of organizations are doing something more than murmuring words of support.

Netflix, to its credit, has devoted hundreds of millions of dollars to acquire work from a remarkable lineup of Black creators. After the protests erupted, the streaming company spotlighted some of those shows, led by Spike Lee‘s superb new film, Da 5 Bloods, which I highly recommend.

Netflix could do that because it has invested heavily in African-American creators and stories for years, including the deals with Lee for Da 5 Bloods and his previous Oscar-winning BlacKkKlansman.

Da 5 Bloods could not have been cheap to produce, given its sprawling story set in the Vietnam War and its aftermath there 50 years later. As with BlacKkKlansman, Netflix has larger goals in mind: It’s clearly hunting awards with Lee’s boundary-pushing and bravura work. Bloods likely will bring more.

And for all of Netflix’s prestige investments in Lee’s work (as well as Emmy and Oscar winners from Ava DuVernay and the Obamas), it likely is spending far more on its nine-figure deals with heavyweight producers Shonda Rhimes and Kenya Barris.

As a whole, this represents an important commitment to representation, at least for the biggest-name Black creators out there.

It’s also worth noting that this week, Netflix founder and CEO Reed Hastings and his wife, Patty Quillin, donated a record $120 million to the United Negro College Fund and two Atlanta-area colleges, Spelman and Morehouse.

Hastings, a former member of the California State Board of Education, has long been a prominent advocate of education reform, even financing a retreat center for reform advocates.

The latest donations are designed to help “reverse generations of inequity,” particularly in financial backing for historically Black colleges and universities such as Spelman and Morehouse, the couple said in a release.

HBO (and now HBO Max) has made its own notable investments, focused more on up-and-coming African-American talent, such as Insecure‘s Issa Rae and Two Dope Queens‘ Jessica Williams and Phoebe Robinson. Expect that to expand as the company takes advantage of HBO Max’s bottomless shelf and commissions more shows for this slice of its subscriber base.

HBO even created one of the most compelling and visceral depictions yet about a horrific incident in the long history of American racism. Last year’s series Watchmen, built on the groundbreaking 1987 graphic novel, showed the destruction in 1921 by white racists in Tulsa of the prosperous Greenwood community and the massacre of hundreds of black residents.

It was easily the most attention given to that sorry chapter in American history, though Our Only President is doing what he can to stir up more coverage.

HBO parent WarnerMedia also announced a string of initiatives this past couple of weeks, including donating commercial time to the NAACP Legal Defense Fund and other social-justice organizations, and adding a modest $500,000 to its existing OneFifty content-innovation program “to seed issue-focused creative ideas from communities who often go unheard.” For perspective on that $500,000 bump, WarnerMedia owner AT&T has a market capitalization of around $215 billion.

But the money commitment that most caught my eye this past couple of weeks was YouTube‘s decision to set aside $100 million to support more Black digital creators.

Yes, there have been notable African-American online stars, such as Andrew Bachelor (who started on Vine as King Bach), Kat Blaque, and Desus and Mero. But it can be easy to lose track of them in the sea of creators that now wash through YouTube every day.

This initiative has distinct echoes of the $100 million initiative YouTube launched nearly a decade ago to fund original programming from 100 multichannel networks. (A second $100 million went to some of those networks in year two.)

Say what you will about the ups and downs of the superheated MCN era, but that initiative jumpstarted what is now YouTube’s vibrant ecosystem of creators, support companies, brands, and spinoff ventures.

With any luck, this new program will do much the same, launching a talented group of lesser-known creators to a new level. Issa Rae came out of YouTube to make Insecure, and now is doing movies. Perhaps this initiative will provide the resources to help a broader group of African-American creators find their way to prominence. Or maybe just TikTok will take it all over.