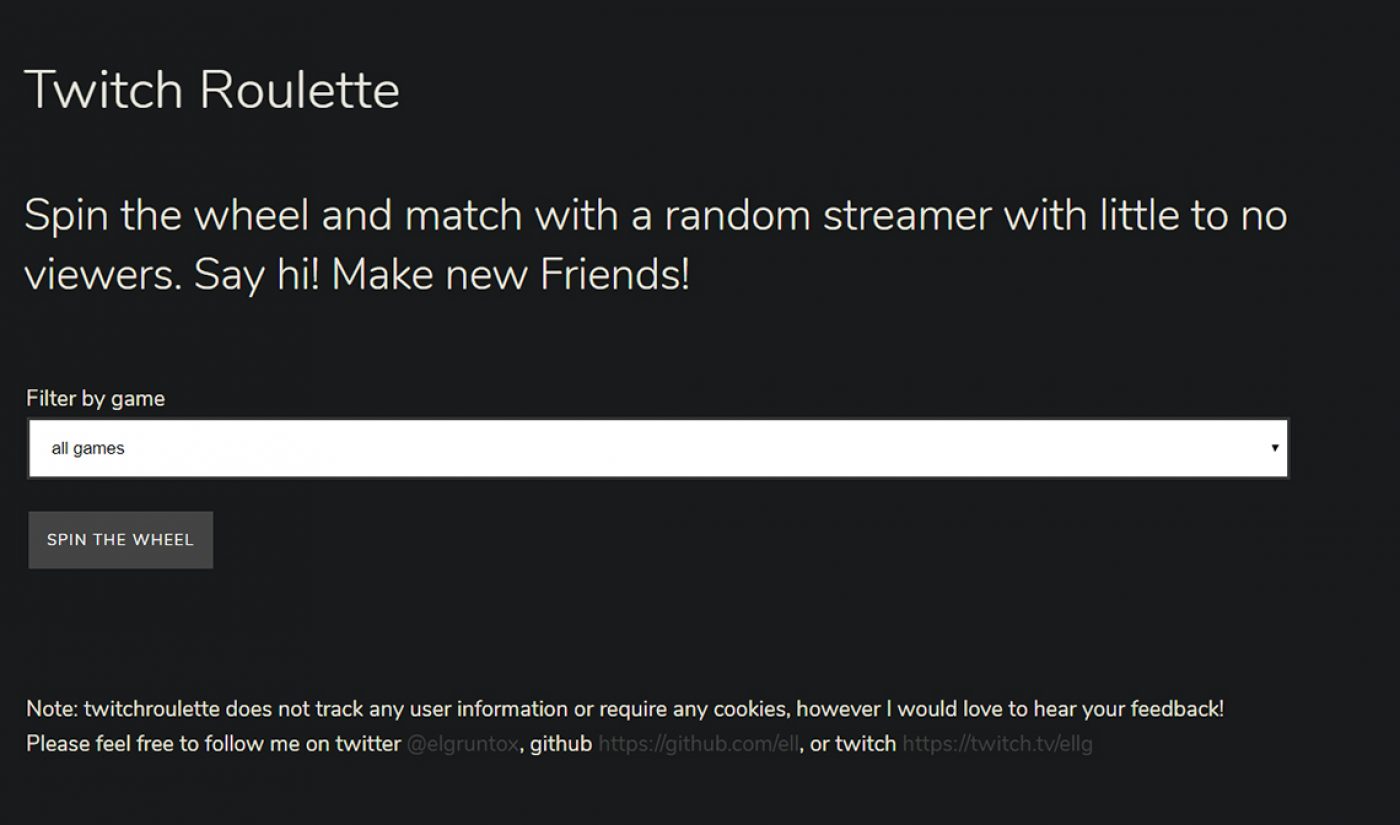 For every Twitch streamer who’s risen to renown, there are thousands more struggling to find audiences for their content. And now, thanks to Twitch Roulette, those thousands might get a little help.

Created by programmer Alan Love and first noticed by The Next Web, twitchroulette.net is a website that spins up a currently live streamer with few or no viewers. Users can ask for a completely random channel (by selecting the ‘All Games’ option), or can sort by dozens of games. According to a tweet from Love, the game titles shuffle every 20 minutes “to keep a good random set and be less biased.”

When we loaded up Twitch Roulette, we were offered a wide variety of titles, from current biggies like Apex Legends and the ever-popular Call of Duty franchise to older releases like Mass Effect 3 and Portal 2 — to more niche offerings like Goat Simulator.

Regardless of which games are on offer, no Twitch channel is needed to watch; you just pick a game, spin the wheel, and the site loads up a streamer’s broadcast window. (You will, however, need an account if you want to join in the creator’s chat or follow them. Twitch Roulette also doesn’t filter out channels marked mature, and those aren’t viewable at all without an account.)

We randomly spun for ten different creators, and wound up with six Fortnite streamers, one Overwatch streamer, one Legend of Zelda streamer, one playing first-person shooter Paladins, and another playing bounty hunting game Hunt: Showdown. All streamers appeared to be based in the U.S. and all channels were English-language (though when we spun for a further five, we got one streamer who said they’re located in Kenya, and two Spanish-language channels).

Every single creator we matched with had zero viewers. In one case, we saw a streamer’s view count tick up to two people–not a dramatic increase and possibly not due to Love’s site, but worth noting, as other Twitch Roulette users have seen streamers gain more viewers and/or followers while they’re watching:

I Twitch Roulette’d (https://t.co/jFSGX2TcwX) yesterday and the streamer I was watching https://t.co/DWzcubrmyU was playing fortnite & went from #50 to #2 . Their viewership also quadrupled during the same space of time. Wonder if the two are related. https://t.co/JnGxlpIG9C

A tool like this is useful anytime, but may be particularly handy now, as people stuck at home are watching more than one billion hours of content per month on Twitch.

You can check out Twitch Roulette here.